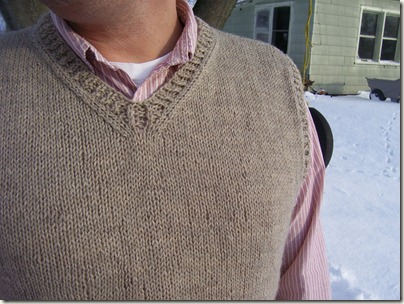 Back in November, I decided that my husband, who is working toward his doctorate, needed some kind of professorial-looking sweater vest. This idea seized me, and would not let go. Never mind that he has never before in his life worn a sweater vest—I was undaunted! I just felt it would be perfect. Just the right amount of casual braininess, with a little insouciance. Yes, a sweater vest! Yesssss!

The first attempt was something with a lot of allover cables, and he eventually let me know that he thought a vest with a lot of “stuff on it” would be too fancy. I also knew it would take me a hundred years to knit a sweater with cabling on the wrong side rows (why? why do that?) so I tore it out and started a simple stockinette cardigan vest.

I worked on this thing every available minute, whenever he wasn’t in the house. I faked a headache one evening so he’d go to a holiday party without me and I could finish the armhole ribbing. I blocked it in my friend’s office at work, where it lay there smelling like a wet animal for three days.

I lovingly wrapped it and set it under the Christmas tree, and waited. When the appointed hour arrived, he unwrapped it, said, “Oh, it’s a vest,” and put it on.

It was huge. So huge. He looked like a little kid wearing his dad’s clothes. We laughed and laughed. The buttons seemed absurdly clownish, and the ribbed hem hung halfway to his knees. Oh my goodness, it was terrible.

Well, I’m a pretty good knitter, but I almost always knit only for myself, so the lesson here was that if I’m going to knit for somebody else, it can’t be on the sly, because that person has to be around to be measured, and I have to check the progress of the work against them now and then.

He’s a pretty good sport, and was willing to wear this awful thing, but I said no way, I can do better than that, so on Christmas Day, I unraveled it and started again, this time measuring him carefully and doing all kinds of math.

The result is much better. 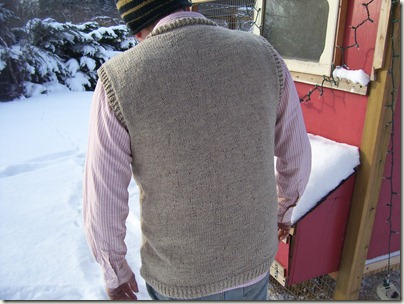 This is just a plain stockinette vest, with twisted k1, p2 ribbing at the hem, neck, and armholes, designed by me to fit him. I worked on this mostly in the dark, while watching the entire Lord of the Rings trilogy, extended edition. (Samwise Gamgee, I loooooove you!!!!) 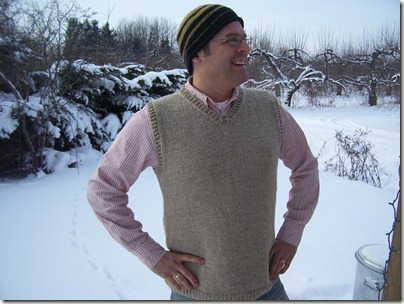