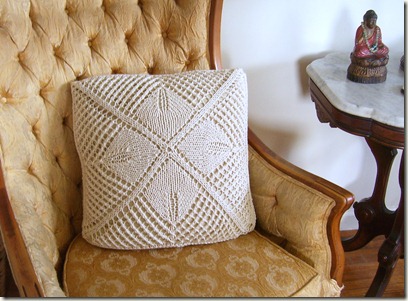 I read a recent issue of House Beautiful magazine, which, I am surprised to say, is growing on me.  I never thought I’d say that.  I still find it a little sterile and pretty much completely inaccessible for someone like me, but now and then I get inspired.  Anyway, according to a fancy designer whose name I don’t remember and actually I doubt I ever knew, two pillows on the couch are not enough.  You need, he says, (whoever he is, because, again, I have no idea) at least four pillows on a full-size sofa, and they have to be a mix of colors and textures.

Well, say no more.  Not that I care if my sofa pillows are lonely, and as a matter of fact, there are those living in my house who will actually refuse to use a throw pillow anyway and will just chuck them on the floor—my aching back cannot understand that kind of thing for even one second—but if you’re telling me I have to make a few more pillows for my couch, let’s just say I’m there. 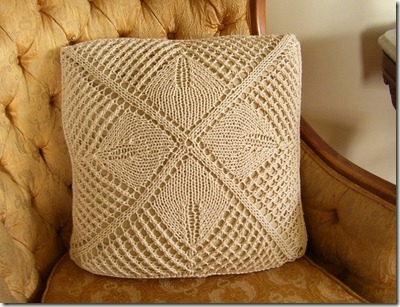 I got your texture, right here.   (Pattern from the book Warm Weather Knits by Deborah Newton.  It’s written as a pattern for a bag, but just leave off the strap and stuff a pillow inside, what’s the difference, right?  That’s right, I’m going off-trail!)  Since I like to not have to worry about which side of the pillow is the “real” side, there are two of these squares.  They took two days to knit (which is about a day and a half longer than I actually felt like knitting lace with worsted-weight cotton yarn) but making them into a pillow took about five minutes, and now I’m hoping my sofa will pass its annual pillow count inspection.
Posted by Kristen at 4:26 PM