The Last of the Earflap Hats 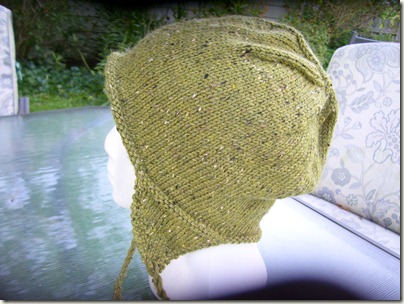 This photo shoot was so riddled with angst and egregiousness that I invested two bucks in a styrofoam head.  The face is a little bit alien-looking, and the neck is almost as skinny as my wrist, but at least I don’t have to hunt around for somebody to take my picture every time I knit another hat.

This is another of my favorite earflap hats from Tiennie Knits, in KnitPicks Wool of the Andes “Dill Heather”, worked on US 5 needles.   I have lost track of how many earflap hats I’ve made; I think it’s safe to say I’m all done with them now. There was one last person who wanted to feel the wind on his face but not in his ears, so this hat is for him, and I just have to tell you, this guy can run fifteen miles an hour (I dare you to try that) and at those speeds, the earflaps on this thing will be sorely tested.  But it does look mighty cozy.