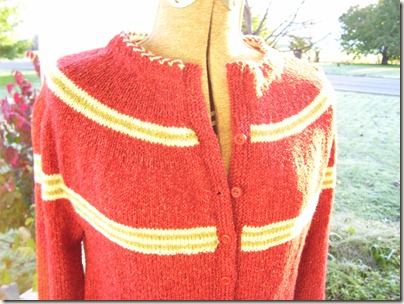 Well.  This isn’t the sweater I wanted to make.  I hope this isn’t a trend.  I have to take the full blame on this one—I made a poor yarn choice.  Not that it isn’t a nice yarn, this tweedy DK-weight combination of silk and wool, because I’m sure it works out well for some people, but I have to say I am just not a fan.  And it definitely isn’t the right yarn for colorwork. 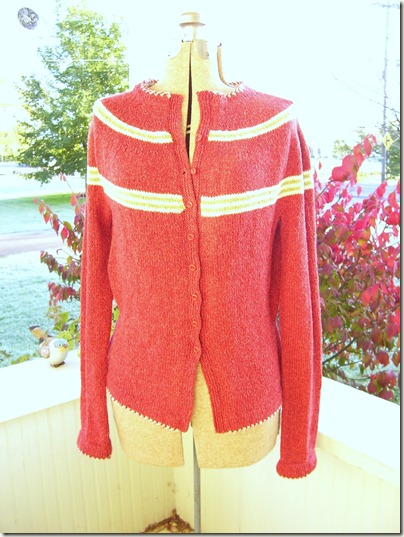 This was supposed to have been Oranje by Ann Weaver.  I’m sure you’ll notice right away that there are some significant differences between her very interesting design and the sweater I ended up with.  Here’s what happened:  several years ago, I was tempted by the sumptuous raspberry color of this yarn, and I bought a heap of it and made a sweater.  It took ages on size four needles and was really design-y, if you know what I mean.  It had a whole bunch of fancy techniques and weird shaping and even though it turned out well, I just never wore it.  I am, it turns out, a plain old sweater kind of girl.  The raspberry sweater was unraveled and the yarn rewound, and went back in my cupboard to await Plan B. 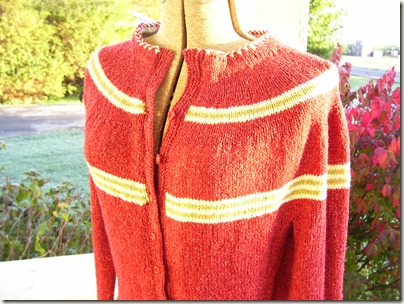 Much later, I saw this and was a goner.  A turtleneck cardigan?  With colorwork?  I thought that was just fascinating, and I wanted that sweater with a burning passion.  The search for the right yarn began, and I eventually concluded for some reason that the raspberry yarn would be just the thing.  Most likely because I already had it in the house.  The clarity of hindsight can be bitter.  I dropped everything and cast on, knitted four hundred miles of stockinette stitch in the round, made both sleeves, with these interesting lined cuffs: 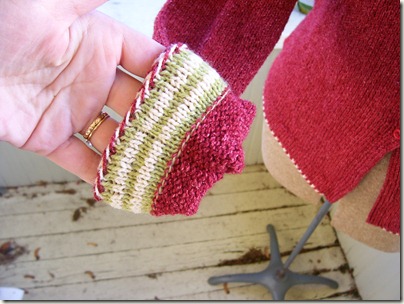 Then I joined them together at the yoke and started the color section which is where the first band of stripes shows up and where the first signs of trouble appeared.  Oh dear.  It was just not good.  It was bad.  It was a mess.  I hacked my way through four of the charts (and by the way, three colors in one row?  No!)  and finally I just had to rip it all out.  I decided to leave the stripe and just work the yoke in plain one color stockinette, threw in another stripe, gave up on the turtleneck because by that point I knew it was going to be huge, and knit all the way to the bind off, still trying to decide if it would be more work to rip it all out again or just go ahead and finish it.   Since I am ultimately lazy, I decided to finish it.  Here’s what you have to do to finish it.  You have to take your scissors and cut it in half.  Whaaaat?  Okay, first you assemble your supplies: 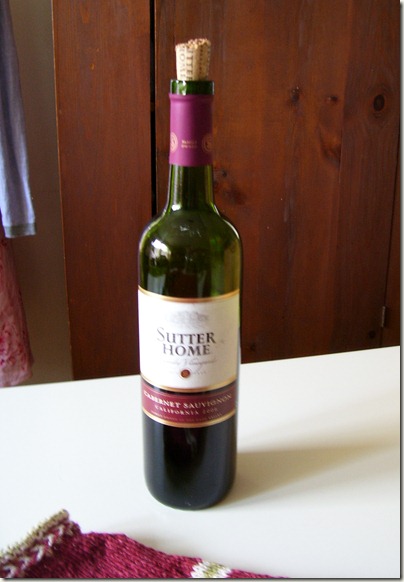 Then you take your scissors and you cut it, from hem to collar.  I don’t mind telling you my hands were shaking. 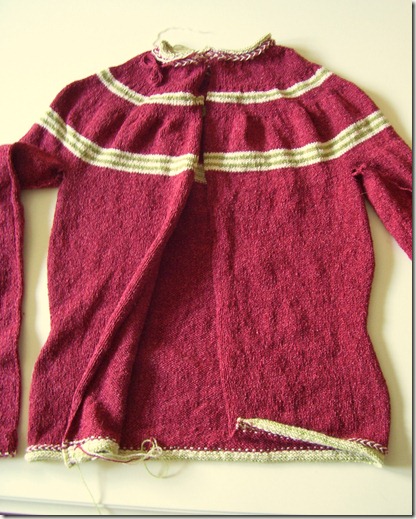 So now, at this point, there’s no going back.  There’s no unraveling this hopeless yarn to be re-used yet again, so going for broke and getting it done is the only option.  Backed into that kind of corner, I did the only thing I could do.  I knit the button bands and called it a day. 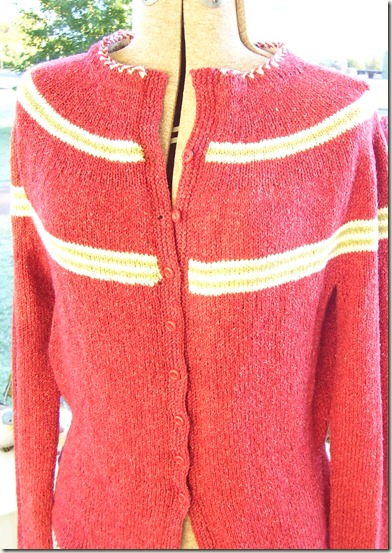 It looks like something Richie Cunningham might wear.  It kind of looks like your boyfriend’s sweater.  Your boyfriend the basketball player, who is taking you to Inspiration Point in his dad’s DeSoto.  He sees that you’re a little chilly, so he gives you his varsity sweater to put over your shoulders.  He’s hoping to fog up the windows a little, so he wants you to be comfy.  And you are, because his sweater is big and sloppy and wooly and warm.  Just like a sweater should be.

Oranje, I’m not through with you yet.  We will meet again.