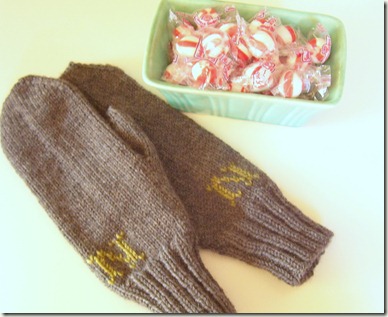 When my girl was very little, I knit her a pair of mittens, in purple yarn, and she wore them to nursery school where, one day, another kid put them on and said they were his.  I kind of thought it was great that he wanted some purple hand-knit mittens that much, but when I pointed out that it was very sweet that he liked them but that the mittens actually belonged to my daughter, the boy’s mother said, with a straight face, “Nope.  Those are Jeffrey’s mittens.”  This was a long time ago now, but thinking about it still makes me feel indignant, and I don’t mind telling you that I totally helped her steal them back from him. 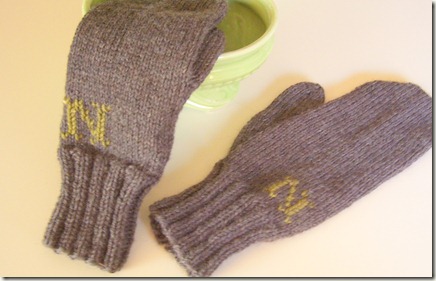 There can be no confusion here.  These mittens do not belong to Jeffrey.  I think Mrs. Weasley knits her monograms right in to the fabric, intarsia-style, but I cheated and used duplicate stitch to put the N on these.  (There’s a great article on the difference here, if you’re interested.)  Pretty cozy, huh?  Now I’m imagining my whole family in monogrammed mittens, each pair a different color, just marching down the street covered in hand knits like a bunch of Weasleys headed for Diagon Alley.  Better start knitting.