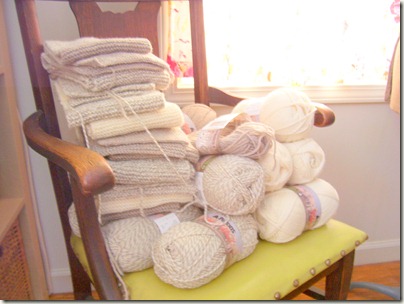 Gradually, this pile of yarn is being turned into a pile of blanket.  I’ve done six strips of thirteen squares so far, and I’m hoping to have the stamina to make eleven strips, though I may bail at nine.  Then I’ll whipstitch them together and put on an unobtrusive border, and it’ll be done, after which time I’ll probably wander sadly from room to room, wishing I had a big garter stitch blanket to gently, mindlessly knit as my brain goes on about other things.

Thank you all for your lovely comments on my hexagon slipper boots!  A few have asked me to write up a pattern, and while a whole pattern is beyond my abilities, I can give you the basics of what I did to modify the original. 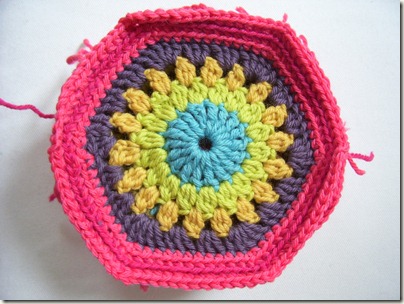 As you know, I first made ten hexagons according to the pattern, in five pairs of scrappy color combinations.  In other words, each boot is an assortment of scrap hexagons, but both boots are the same.  Then I chose two different hot pink yarns and worked three additional rounds of sc (all terms are US) on each hexagon, alternating light, dark, light.  So now, the hexagons are bigger than the pattern intends.  Good thing I’m using the smallest hook they recommend—US F, or 3.75mm.

Next, I crocheted them together using the darker pink as called for in the pattern, and adding two more hexagons to the leg portion of each boot.  At this point, I left the bottom of the boots open and worked on the upper leg, peering at the photo and figuring it out as I went. 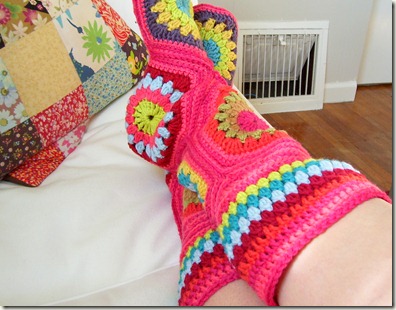 I began at the back of the leg, joined with a sl st, and worked a few sc, then a few hdc, then a few dc, then one tc, then a few dc, then a few hdc, then a few sc again—in effect, using the graduated heights of those stitches to fill in the “dent” at the point where the two hexagons came together.  I just improvised this as I went, so I don’t know how many of each to tell you—just work the single crochets where the hexagon is at its highest point, and work the triple crochet in the lowest point, and fill in between with the other stitches.  The first round didn’t quite fill in the dent, so the second round was worked much the same way, using sc and hdc.  These two rounds level out the top edge.  Then, alternating colors as my whims dictated, I worked four rounds of dc3 clusters (as described in the original pattern) three rounds of dc, and one final round of sc.  I toyed with the idea of adding yet another round of fancy shell edging at the top, and I still may do that, but it seemed like it was getting to be decorative enough already.

Next, I made the boot soles. You work them separately, and I made them strictly according to Priscilla’s instructions—this was a technique new to me, but easily figured out, if tough on the knuckles (if you try it, you’ll see) and when I sewed them to the boots according to the instructions and tried them on, the fit was not so great—closely fitted at the toe, but very baggy at the ankle.  So I took the soles off, sewed the two hexagons at the back of the heel together at the bottom (I don’t know how to explain that any better—you’ll just see that there are two hexagons at the back of the heel, and if you sew the bottom edges of them together, you’ll have it) and then sewed the sole down on top of that.  The sole went over the hexagons at the heel, and was seamed to the toe hexagon as called for in the instructions.  The sole is double thick now, at the heel only, and the two hexagons edges come together at the inside of the boot, under my foot.  I hope this makes sense—I think you’ll see what I mean when you get there. 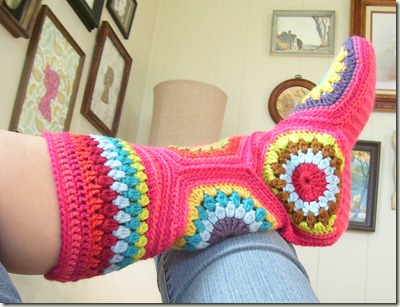 Those are my modifications to this already very clever pattern, and the results are relaxed and comfy and fabulous!  You’ll probably be able to wear these with socks, and might even be able to sew in a fleecy liner (somebody out there on Ravelry did that, I think) and you can forget being able to fit them in your shoes, but for snuggling up on the couch working on your endless miles of garter stitch blanket in three exciting shades of taupe, they are perfect.  Good luck!

Many thanks, too, to the very talented Sandra for the lovely award--gosh, Sandra is crocheting circles around me.   Muchas gracias, mi amiga!