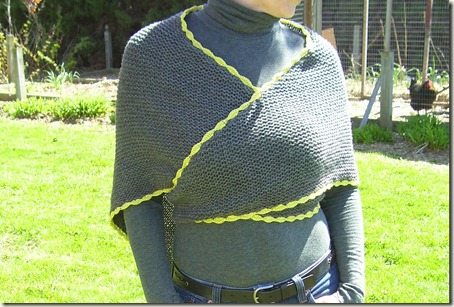 As part of my continuing series, titled “Neutrals + Lime: an Exploration of My Yarn Leftovers”, I present this Heartwarmer.  I love that it’s called a Heartwarmer.  That warms my heart, actually.

The weather here in New York is being very typical right now, and we’re having a stretch of those deceptive days where it looks like summer so I wear a thin layer and head outdoors and then the fact that its only 47 degrees F slaps me in the face.  Enter the Heartwarmer. 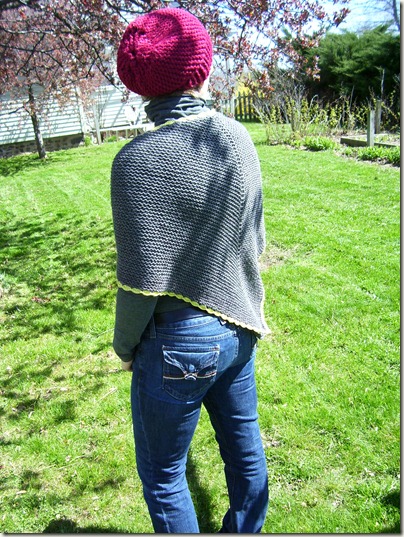 The beauty of the Heartwarmer is that it ties in the back, underneath the point, so you don’t have those long ends flapping around, dipping themselves in the soup, or coming unfurled all the time.  You shawl wearers know what I mean.  [Side note:  behold the power of Lucky Brand jeans, making me look chic in a knitted shawl!  I know, right?] 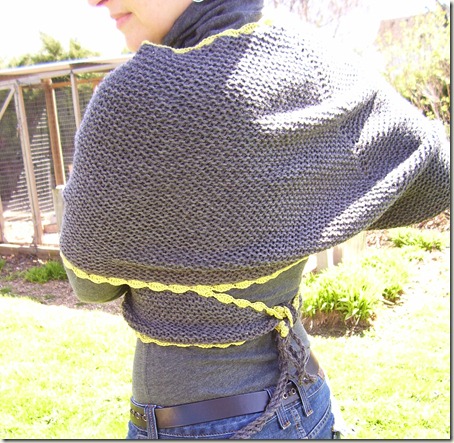 See there?  Brilliant!  Some woman, somewhere, was dealing with the ends of her shawl dragging into the cook fire and got sick and tired of it, so she tied it around the back of her waist and got on with dinner, and to that, I say Yes!  Thank you.

I found the knitted corners themselves a little bulky to tie, so I attached a couple twisted cord ties, which do the trick very nicely, if you don’t mind having them hanging down the back like a fringed rat’s tail.  Here’s how I did it: 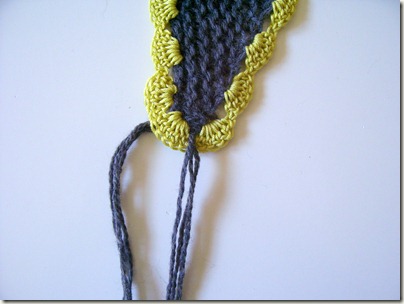 I measured three lengths of yarn equal to my wingspan—both arms outstretched—and then looped them through the one corner of the edging.  Then I began twisting one half in a clockwise direction, until it was good and twisted and started trying to double back on itself. 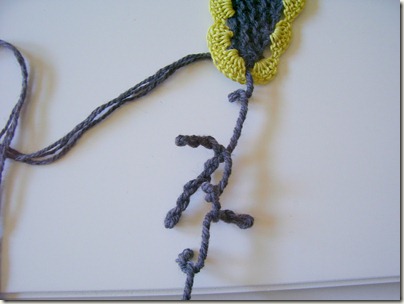 Then I twisted the other half in the same direction—clockwise—and without letting go of the ends of the first half, until it was also good and twisted.  Then I tied the ends of both halves together and let it go, letting them twist together. 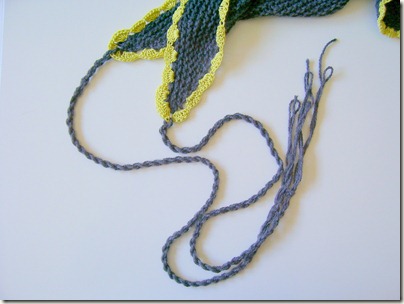 Do the same on the other corner of the edging, and trim the ends to make little tassels. 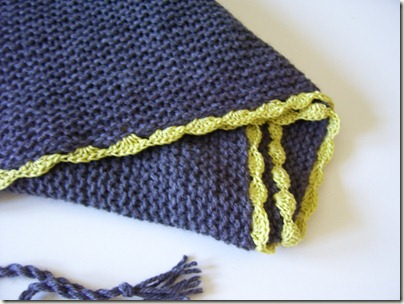 I used Kay Meador’s Tess pattern, found here and then, because I can’t help it lately, I added a lime green edging by working 6dc clusters every inch or so, all the way around it.  I found the finished shawl a little small, so I pin-blocked it, which definitely results in a different fit than intended.  One of the characteristics of garter stitch is its elasticity, which in this case makes the finished Heartwarmer kind of hug you, while giving your arms room to move around.  Pin-blocking it will give it a lot more drape, but you’ll lose that elastic quality.  So mine doesn’t hug me.  Instead, it feels kind of flowy, which isn’t a bad thing, but If I’d had more yarn, I could have worked a few more rows before binding off and would probably not have had to block it.  Such is life when you’re using up your leftovers. 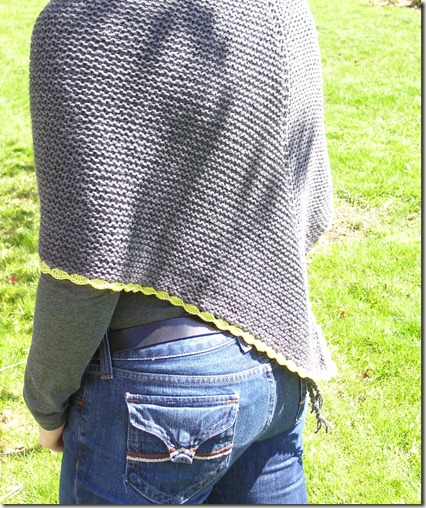 I love this thing.  Why didn’t I think of it sooner?  Many thanks to the always fabulous Alicia for the idea.