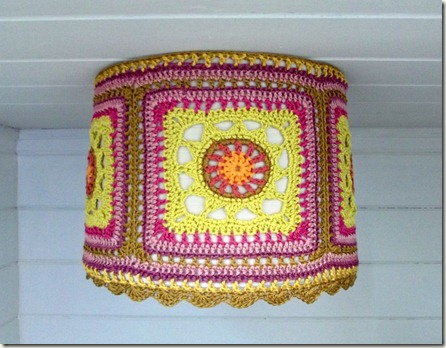 I was listening to world music on NPR yesterday, and was influenced by something Moroccan.   I had only turned on the radio to try and purge an insidious Culture Club earworm, and the lampshade I intended, along the lines of this, became slightly more opulent. 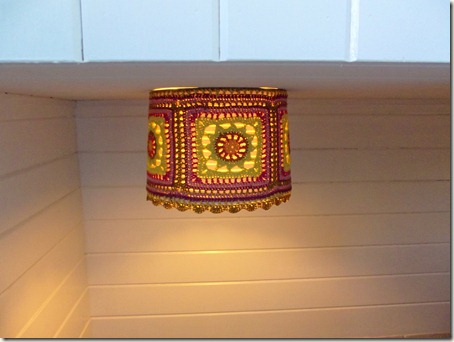 This is the basement stairwell, leading to the gloomy lair that is my laundry room, and it is finally getting it’s turn with the paint.  We moved here over twenty years ago, and this poor, shabby corner of the house kept getting bumped to the bottom of the list.  I’m so glad it finally came due, because the unpainted cinderblocks and orange-stained wood cladding, and especially the bare bulb that hung here, were creeping me out.  Wow, paint is wonderful, isn’t it?  [FYI, This is Chantilly Lace by Benjamin Moore.] 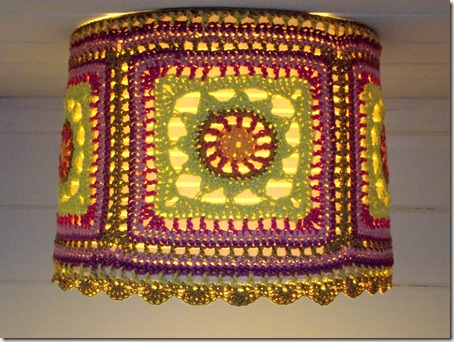 I started with a thrifted lampshade, measuring its height and circumference—this lampshade is mostly barrel-shaped, which makes this process pretty easy.  It is 9” tall and 41” in circumference [math!  I hate it!] at the bottom edge, which meant I would need to start with five 8” squares—five times eight is forty, and they needed to stretch a little, to spread out and show the pattern, and also to stay on.  Using fingering weight cotton (Tahki Cotton Lite, and Berocco Pima Cotton) and a US F crochet hook, I made five squares (Edwardian Fancy, from this excellent book) and blocked them.  When they were dry, I sewed them together and tried them on for fit.  It was nice and snug, good, so I began adding more rows at the top and bottom edge, trying to continue the pattern as given in the blocks and swapping colors in and out as I pleased.  Because the circumference at the top edge of the lampshade is slightly smaller than the bottom, I decreased a little bit in the rows at the top edge, always trying it on to make sure I was on the right track.  When it was tall enough, I added a row of simple shells at the bottom. 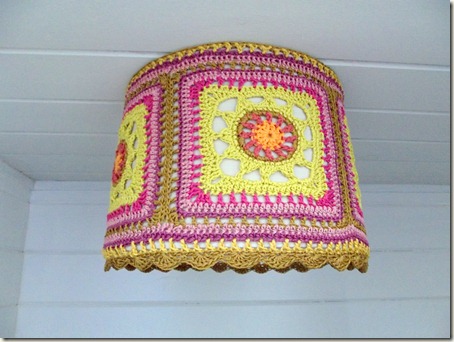 The hardware inside the lampshade was designed to fit over a harp, with a hole at the top for the finial to fit through (so, not the sort of lampshade that clips right to the bulb.)  We snipped out the ring at the center, leaving the four branching rods sort of poking out loosely; those rods are what tuck between the existing ceramic fixture and the ceiling, like this: 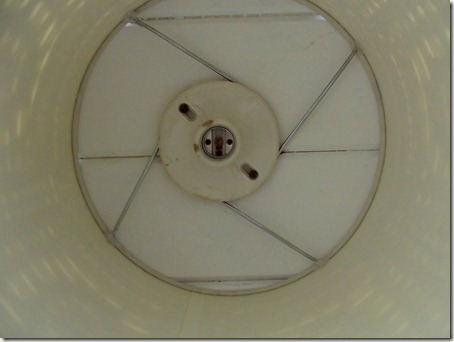 They’re not attached to anything, they’re just tucked under there.  Clever!   A couple of them got a little wobbly, fixed with some hot glue. 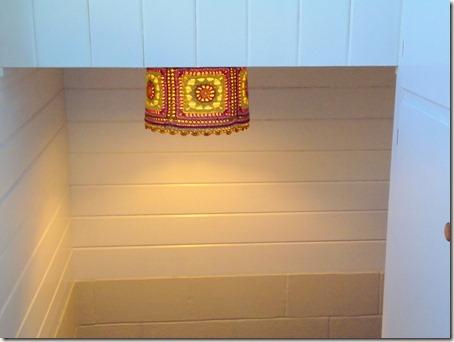 So much better.  Doesn’t it look like it leads somewhere a lot more exciting than the laundry room?  It has a secret, beckoning quality, like it leads to something dark and mysterious and wonderful.  It’s an intriguing lampshade.  I like that a whole lot.