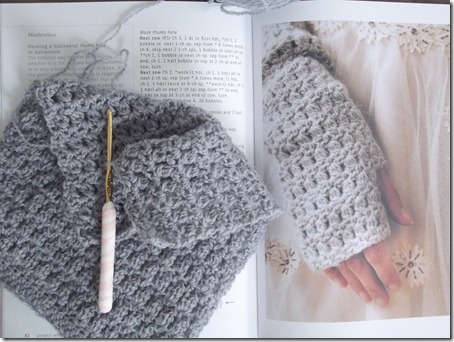 I have been lured in by the promises of a beautiful photograph, and have come to believe that if I make these ethereal crocheted arm/handwarmer things, I will become ethereal, too.  In reality, I am the furthest from ethereal you can imagine, so I guess I’m really laying a lot of pressure on this project.  In my helpless pursuit of this goal, I have broken a cardinal rule—I am using thrifted yarn that has clearly and obviously been infested at some point by moth larvae.

[pause to allow for exclamations of horror]

I know.  I am bad.  I will most likely be paying a stiff price for this transgression at some point, and I will have no one to blame but myself.

The yarn is some kind of antique shetland in DK weight in the most gorgeous stormy gray, and it was only a dollar, and while there has been (so far) no actual insect spawn, there is a lot—a ridiculous amount—of breakage.  I have had to spit-join about ten times so far.  (Do you know about spit-joining?  If you hate knots and ends, you should know about spit-joining.  More on spit-joining later; it’s so handy.  I’ll tell you all about it sometime.) 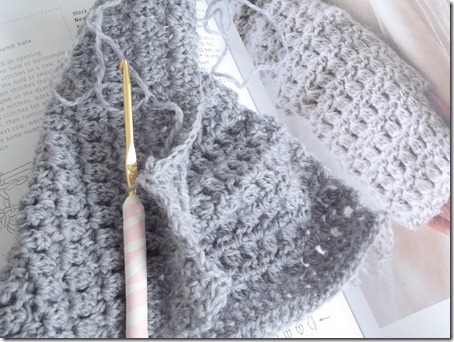 Come on, look at that gorgeous shetlandy halo.  Doesn’t it just make you want to wear a beautiful pearly gray dress with a tulle underskirt and with maybe a little beaded handbag, an updo, and a corsage from a boy?  I just had to take my chances.

The yarn did spend a few days in the freezer first, and now the ice cream probably tastes like wool (totally worth it) and I don’t actually know if that trick works or not because I’ve never had a moth infestation before, or maybe that’s why I’ve never had a moth infestation.  It certainly isn’t because I’m super careful about what wools I bring into the house.  Probably I’ve just gotten lucky, and maybe I’ll keep getting lucky, and I’ll keep on spit-joining this as I go, and will finish up these lovely things just in time for the prom.