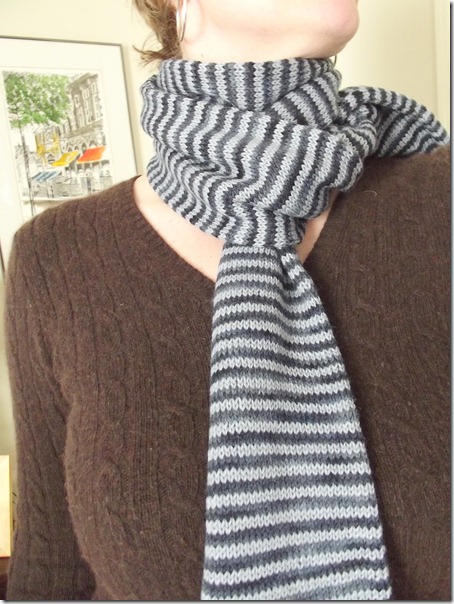 Another scarf is off my needles, and warm weather is nowhere in sight (oh, you there with your blooming plum trees and your daffodils, know that I am very envious.  Very.)  I don’t know why I expect spring to come in March.  This is New York.  I am not new here.  But I am ever hopeful.

Along the lines of this, I decided this time to just choose two skeins of sock yarn (about 350 yards each) that seemed happy together and then knit them until they were gone.  A peruse through the stash produced a skein of Araucania Ranco in the lyrically named Color 107, which is a hand dyed semi-solid in indigo, and Cascade Heritage Sock something or other in pearl gray—the ball band is gone, so I don’t know what fancy number name they gave that one.  I used US 4 needles, and knit it back and forth on 80 stitches, changing yarns every two rows and carrying the yarn not in use up the side. It took awhile, because other projects beckoned, but eventually, I noticed that there was this much yarn left: 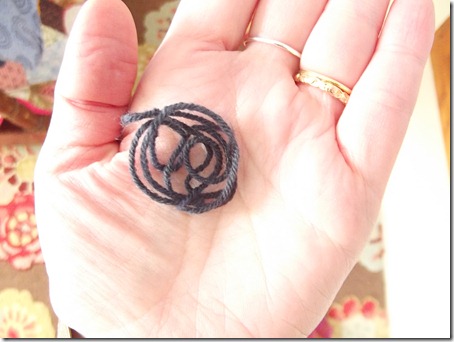 So I bound off in the gray, and sewed up the ends and the long side.

I tried really hard to make sure my chin looked good in the photos.  There were a lot of fails. 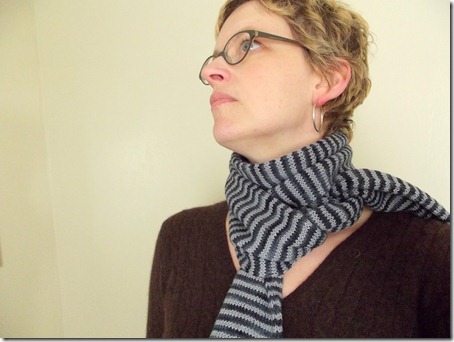 Maybe if I tuck it under the scarf?  Better. 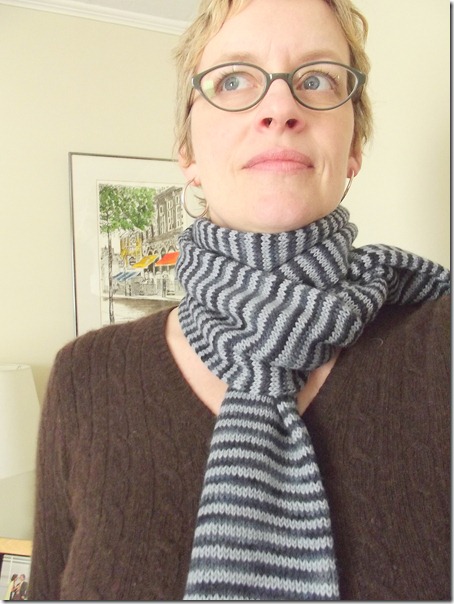 I am often asked whether one could knit this in the round, and the short answer is yes indeedy, you sure could do that.  You would have to contend with a few extra issues, though--there would be some row counting, which seems like it would be relatively easy, what with it being a two-row repeat, but I think I have demonstrated how easily I am distracted.  Knitting back and forth lets me do a knit row and a purl row, and that reminds me to change colors, a good enough reminder even if I am deep in concentration elsewhere. 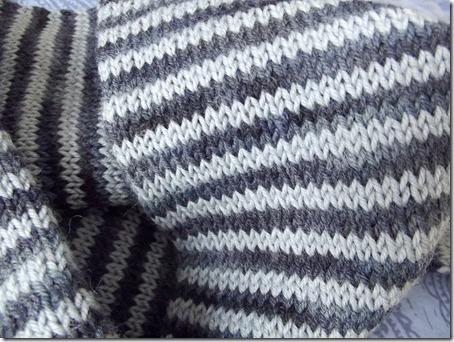 You’d also have to deal with the jog, which is what happens when you’re knitting in the round and you change colors.  The stripes don’t line up.  (I know, there’s the jogless jog, but that’s also something to have to pay attention to.  Backing and forthing is utterly mindless for me, which is the whole reason I choose a project like this.  (I’d actually kind of miss the purling, too, if I am being totally straight with you.  I’m not one of those girls who hates to purl, though I know they are many.) 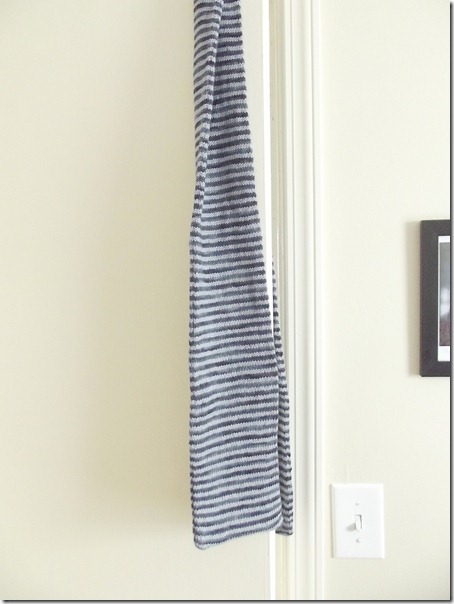 Worst of all, you’d have to spend a few minutes reconciling the length of your circular needle with the number of stitches you were hoping to cast on.  Not necessarily easy, especially if you’re wanting one of those long skinny scarves, since the minimum number of stitches you can get away with on a circular needle is however many stitches will reach around it.   You can’t work 40 stitches in the round on a circular needle, unless you’re willing to use a really teeny short circular needle, which, just, ugh.  You could do it on double-pointed needles, but then you’d be working on double-pointed needles, which have their charms to be sure, but which will tend to get annoyingly hung up in my sleeves or leap deftly into the crack of the couch cushions, and then I have to pause the movie, turn on the light, get up and take the couch apart…

See what I mean?  I just knit it flat, it’s easier.

As I worked on this, with its manly blues and subdued neutrality, I thought I would stash it as a future gift for one of the wonderful men in my life. 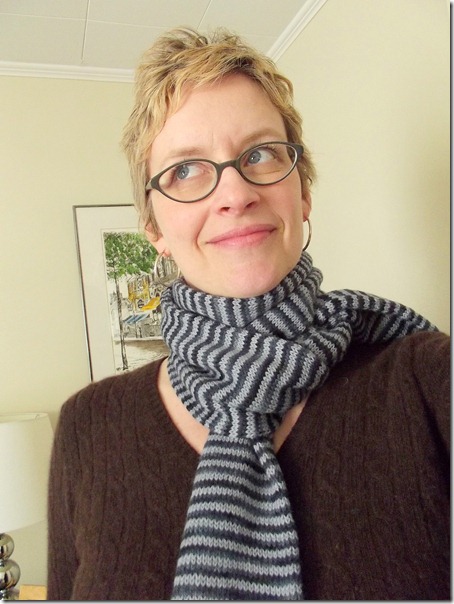 But I really like it on me.  Sorry, boys!