The Who Needs a Pattern, Anyway needlepoint project that I threw together in a half-second so as to hurry up and begin stitching is done.  It took forever.  ForEVER.  How do people get these things finished?  I mean, I spent months on this thing, and it’s only about eight inches across…well, I stand in awe of you needlepointers, is all I can say, and in even more awe than usual of Kaffe Fassett and his wondrous needpoint tapestries.   Any more needlepoint than this little doodad and I would’ve had to give up knitting (never!) just to make the time.  I’m not saying I didn’t love it, because I did, but it progressed at a pace so as to not be noticeable or measurable.  I’d work on it for an hour and it would look just the same as it had before.  I had to change colors every ten seconds, and cut yarn and weave in an end, and then start over in another spot.  Memo for next time:  larger blocks of color equals nice.

So, it is very small, because the scrap of canvas I started with was small, and also because I couldn’t have gone any longer without screaming.  I made it into a pillow. 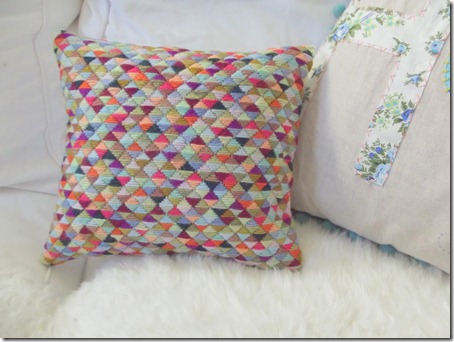 It’s one of those wee pillows that isn’t really good for anything except looking cute.  I really only like it up close.  I think the triangles could have been a lot bigger.  Next time!  There will be a next time, too.  I just found a giant roll of needlepoint canvas in the thrift store.  A tapestry-sized roll.  I have so many ideas.