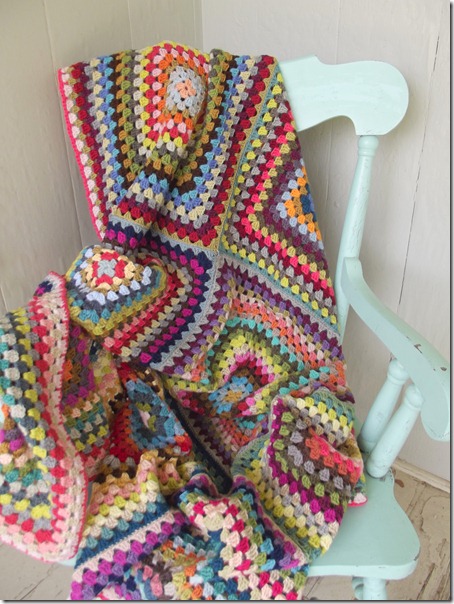 This one was so easy, then it was so hard.  I made twelve twenty-round granny squares, using odds and ends from my scraps basket, and it was a breeze, I tell you.  It felt like I could’ve done that part of it all at once.  Which of course isn’t the point, and why be in a rush, but the grannies call to us, don’t they? 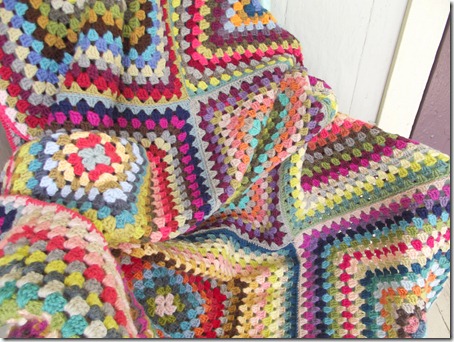 So satisfying, that part.  The grannies.  How beautifully, perfectly simple is the humble granny square.  How I love to fill a basket with three dozen different leftovers, and turn them into granny squares, and I love how they are all the same, and yet no two are alike.  But of course you understand perfectly.

I had twelve squares, and they were great, cheerful and thrifty. 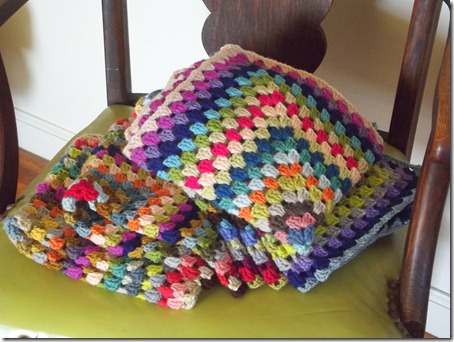 I also had about six big skeins of navy blue yarn, and so I thought about it carefully for about a quarter of a second, and using the join-as-you-go method, added one round to each square and worked them together in navy. 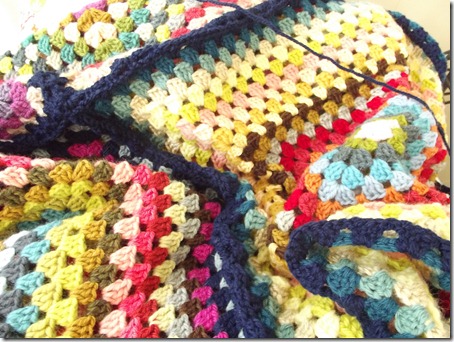 And it was a blanket, and it was large, and with all the squares joined together, it was almost finished, which is the most tremendous motivation I know for getting a thing all the way done. 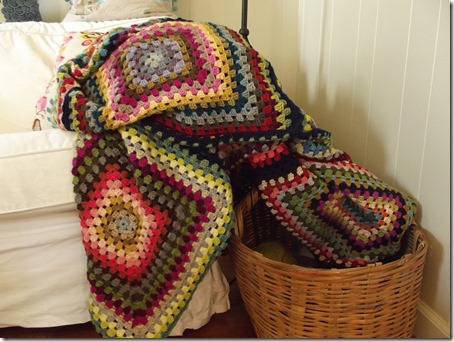 It needed a border, so I delved back into the basket (which, as you can see there, is finally emptying out) and there was just nothing left.  But I am undeterred by such things!  No yarn left?  That can’t be true, not around here!  Not on my watch!  I’ll find some yarn in here, yes I will.  I dug around and found a whole bunch of uninspired colors that looked terrible together and proceeded.  I started working a border involving granny clusters, rounds of single crochet, some rounds of dc, ch1, sk ch1 sp, blah blah…it got elaborate, and it was taking a thousand years because every ten stitches, I’d pull back a little, and look at it.  Study it.  Stand up and look at it from a distance.  And it became clear. 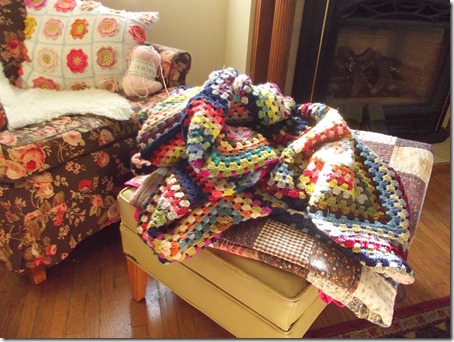 I did not like it.  The navy yarn was sucking all the life out of it.  Still—and this is how lazy I am—I kept going.  That sounds like a contradiction, to keep crocheting because I’m lazy, but this was already a blanket, and it was on the fourth side of the last round, a last round of navy yarn done in an improvised and half-baked shell pattern that had four dcs in it, which even as a side issue was bugging me--why four?  There’s a topic for another day, the number four.  Anyway, it was 99.998% done, and I frankly could have just cut the yarn and woven in the end right where it sat and nobody could have denied it was a blanket, and I did not like it, but the thought of ripping it all out, all the way back to a pile of twelve squares, and then going back and figuring out what to do when I had already visited that problem and failed, just seemed like a hassle.  So it sat there for days, and I didn’t want to work on it.  I didn’t want to finish it, even though it was, literally, minutes from the finish line.

I was gathering my strength, I suppose, because eventually, I knew it had to come apart, and then it did.  It took hours.  I unraveled ten rounds of border, and then picked out all the ends and unraveled the last round of each square, the ones that had joined them together. 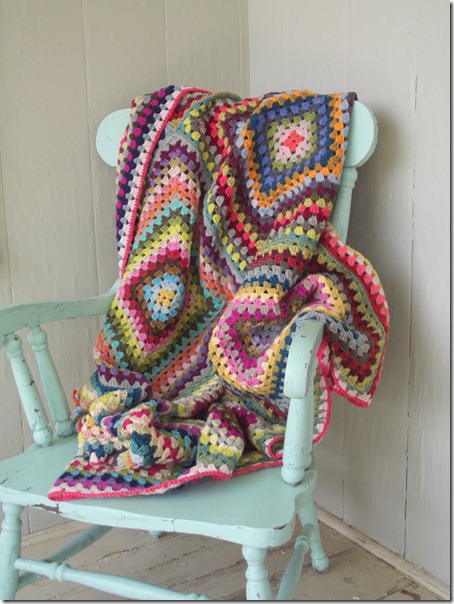 It always seems like it’s going to feel awful doing that, pulling something apart that didn’t work and trying again, but it never does.  It feels great.  It feels right.  Why toil for weeks just to end up with something that bugs you?  Anyway, I sewed the squares together and added a two round border, one in granny clusters, and one in single crochet.  That’s it. 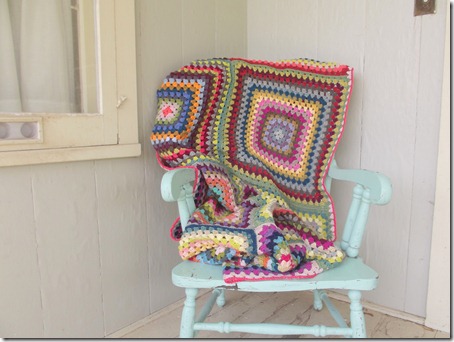 So much better.  I don’t know why these things always have to be so epic.