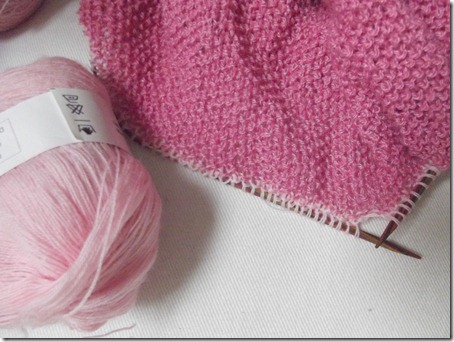 The Interminable, I mean, The Amazing Seed Stitch Wrap has reached a milestone:  the second color.  I thought this day would never come.  I can’t even think about the end of this insane project, because it is so far in the future as to be a teensy speck at the very distant and dark edge of the known universe.  I have knit 600 yards of seed stitch, in laceweight, and the thing has barely begun.  This light pink (Athena 100% Merino in color 202) is only the second color of, what, nine?  You want a project of such boring enormity that you will test the limits of your own ability to withstand ennui?  Friends, I am telling you, this is it.  I am enjoying knitting this on the same level one enjoys training for marathons or canning a hundred pounds of peaches.  That is, with a weird kind of peaceful and resigned happy suffering.  I panicked briefly when, upon joining the first row of the new pink to the last row of the old one (JaggerSpun Zephyr Silk/Wool) I noticed it was only about half as thick, was really about as thick as sewing thread for crying out loud, and as I considered banging my head on the table in despair, my dear friend Carolyn rescued me and suggested doubling up the new yarn.  Of course, it worked beautifully.  That’s not the first time she’s bailed me out, either.  Once, I broke the tip off one of my gorgeous vintage plastic straight needles, and before I could even finish my gasp of misery, she said, “Just put that in the pencil sharpener.”  I hope you all have a Carolyn, everybody needs one. 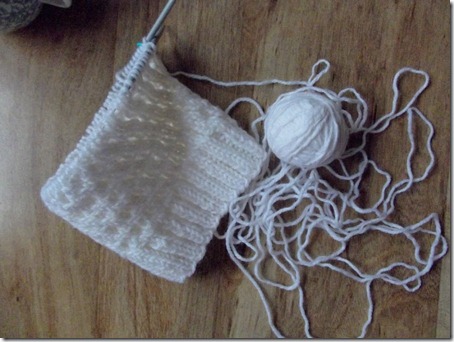 I am still abundant with hats, too.  One of these days, I’m going to find a willing human with a head and photograph all these hats for you. That’ll be a long post, whoo. Watch for it. These hats are what I do while we laze around watching American Pickers.  Finally, finally, there is some lazing around.  The past four months have been so jam-packed with (wonderful, happy) things to do that it feels like I have not had two spare minutes until now, and I see the leaves are starting to turn already, there are apples at the farm stand, and where did the time go?  Whatever happened with the cicadas?  I didn’t see them, did I miss it?   What a weird summer.