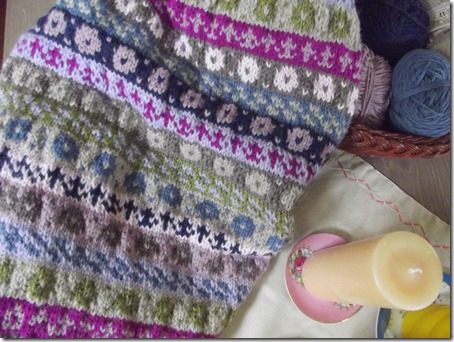 This absurdly massive stranded colorwork coat project is making me swoon with joy.  I am, for maybe the very first time ever, completely confident in my color choices.  Each time I join a new color, I think oooooh, that’s pretty!  There’s value contrast, and warm/cool is in balance, and there’s plenty of yarn so I don’t have to worry about running out.  The individual pattern bands are made up of four or five two-color rows and two plain rows, which turns out to be perfect because each one lasts exactly as long as my patience for it.  Just when I can’t take any more two-handed knitting, I get two plain rows for a little bit of a breather.  Then the colors change and everything feels fresh again, and it all keeps happening every six or seven rows.  That goes a long way toward keeping this knitter interested.  The other thing that helps—I’m giving a secret away here—is that binge-watching series television on Netflix will distract sufficiently that even a complicated-looking thing like this huge multi-colored knitted coat will appear to knit itself while you are off doing something else.  I swear this is true.  I can’t believe how much of this project is done already.  It’s almost to the armholes!  When did that happen? 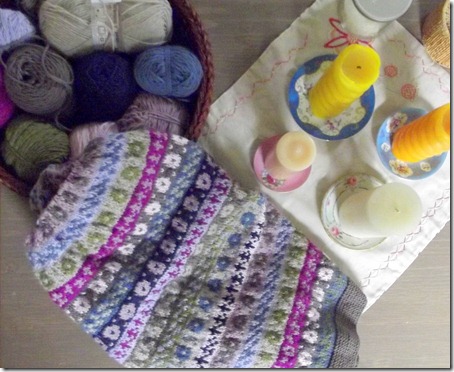 But of course, I wouldn’t be me if there weren’t some doubt.  For one thing, I am deviating from the pattern as written and knitting this in the round, which is great because the colorwork is all done on the right side and also that the whole body is almost done, but it also means there will be (eek!) a steek.  If you’re new to knitting, a steek is an extra section worked in a garment knit in the round that will later be cut open to make a front opening or armholes or whatever.  Cut.  With scissors.  [As an aside, my theory is they decided to call it a “steek” because that’s kind of the sound that involuntarily issues forth from the knitter as she executes this terrifying maneuver.] Anyway, the thing about steeking is that there is no going back.  No doing what I often do and deciding at the end that your knitted garment is not what you hoped and then unraveling it all again to reuse the yarn.  Once you have steeked a garment, it stays steeked.  It’s a permanent situation, and a done deal.  So it’s always super-scary, and there’s no way around that, at least not for me.

Also, when I do get to the armholes (just three televison sitcom episodes away, I’m guessing) I will have to either figure out how to steek those too, and and then suss out the shaping (oh my aching brain) or else start working this two-color stranded business back and forth, which is extremely onerous, so terrifically tedious that because of it, well, somebody invented the steek.

Also, I sense that the finished garment is going to be huge.  This could be that wearable blanket I’m always talking about.

Focusing on the pretty colors.  Pretty! 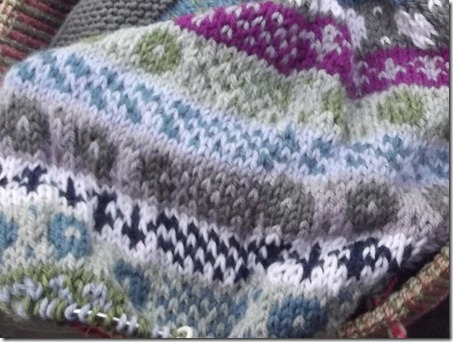