Mouse blanket, a most satisfying project 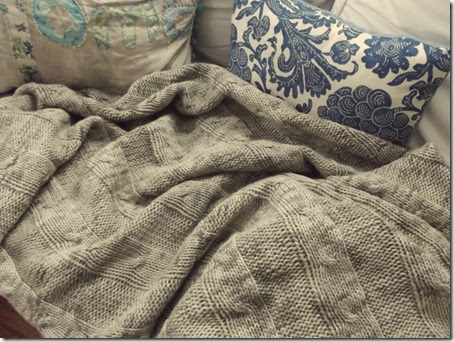 I’ve been wanting this blanket for such a long time.  Plain and simple, and mostly the same color as the dog.  Thinking practical, you know.  Though if pressed, I would describe this color as Field Mouse.  I end up with a lot of things that are the color of mice, and I guess I have to admit that “mouse” may make up the basis for my personal palette.  At least that’s what the evidence would suggest. 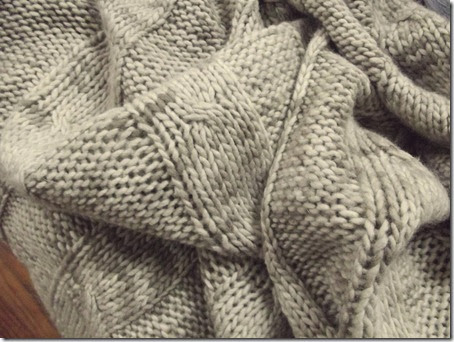 It began with a bargain at the Fiber Festival last fall, when I found nine skeins of Merisoft Space Dyed (color SPD 321) at an unbelievable discount—because otherwise, there’s no way—and after I had staggered to the car with yarn piled up to my chin, I started dreaming of the blanket I could make, with a simple cable and big needles for drape.  I am a little bit lazy, so the fact that the yarn was in skeins and needed winding meant that I let it sit around for four months.  Honestly, I will choose a project almost completely based upon which yarn is already wound and ready to use.  I am not kidding.  I am trying to change. 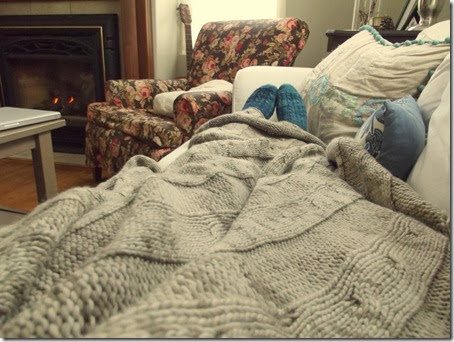 I guess you know I like to be cozy. 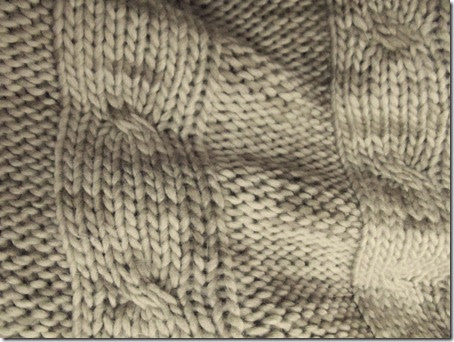 I notice lately that everything I’m working on is kind of basic and plain and comforting, and that anything requiring a pattern or a hassle or the making of more than two decisions starts driving me bonkers and gets unraveled.  I spent four minutes planning this blanket, ended up asking the doctor to do the math for me (“I have nine skeins of 197 yards each.  I want to use all of it.  I don’t want a long skinny rectangle.  How many stitches should I cast on?”) to which problem I assume he applied some kind of complicated algorithm—how should I know?— while I looked at Pinterest on my phone.  Eventually, he said, “168”.

So I wound all the yarn, ugh.  I hate doing that, and I don’t know why.  I have a nice winder and swift, so I don’t know what the big deal is.  Probably impatience.  Anyway, I cast on 168 (a multiple of 16 + 8) on a US 10 circular needle and worked K8, P8 across, ending with K8.  After eight rows, I worked a row of CF4 cables on the four stitches in the middle of the eight stitch knit columns.  Because cabling four stitches is easier than cabling eight.  Seriously, that’s the reason.  Well, and also I thought a CF8 would pull in more, affecting the drape.  I repeated the cable row every sixteen rows until the yarn was almost gone, ending on a row 8 again, then bound off.  I wet-blocked it on the rug overnight, and then, this morning, I wove in the two ends.  Two.  Friends, that is what you call a satisfying project. 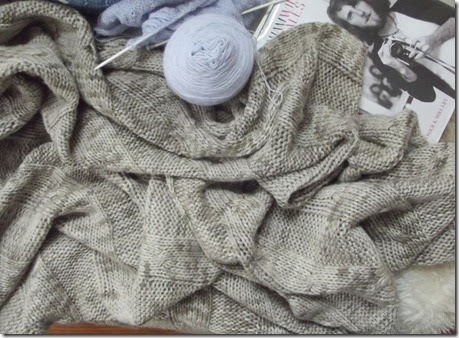 I’m going now to crawl underneath it to knit another extremely simple something and read Graham Nash’s new book.  I will get a crush on him.  I guarantee it.