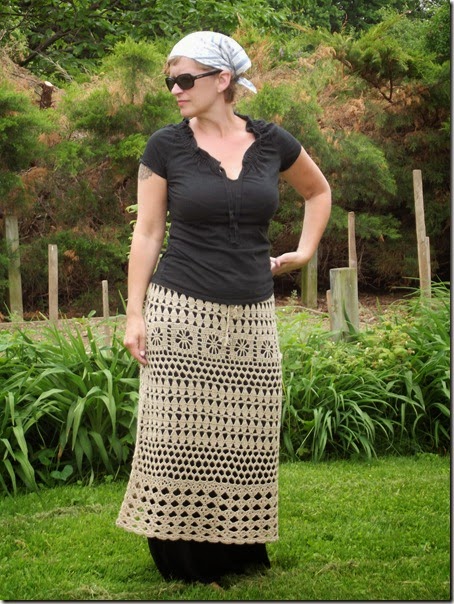 I once had an after school babysitting job working for some hippies.  Well, he was an architect, so I don’t know—they had all the “Foxfire” books and their kitchen glassware was homemade using ginger ale bottles.  The kids and dogs all had names that made you think of Olivia Newton-John songs.  They had carob-chip cookies and a bathtub full of spider plants.  They were hippies with money, which seems kind of ideal to me.  Anyway, they had some curtains made of burlap, undoubtedly crafted by some artiste one of them knew, or maybe purchased at an art fair, but their living room curtains looked like this skirt.  I kept thinking of them the whole time I was working on it, wondering if they still remember the time the little kids ended up walking downtown by themselves when I forgot to go get them at the bus stop because I was all engrossed in watching Phil Donahue. 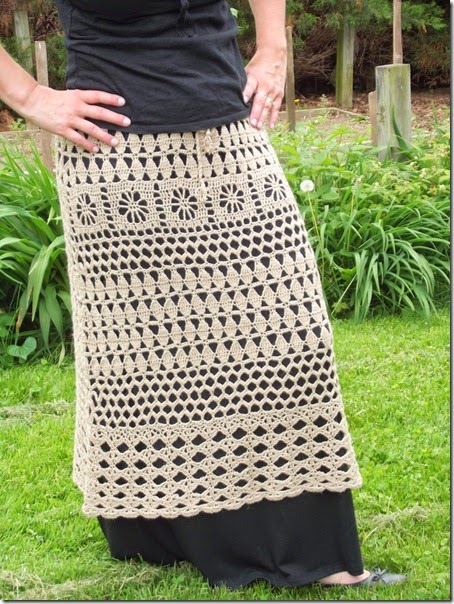 So this is the Sunshine Skirt, by Mari Lynn Patrick.  The third time was the charm, but it was still sort of a struggle.  It is meant to be worked in two panels with gradual decreases at both edges, and then seamed at the sides, but I just couldn’t make it work.  I wanted this skirt, though, so I kept trying, and eventually decided to work it in one piece, in the round, and just figure it out as I went.  I started with double the chains given in the pattern, marked the two sides, and joined to form a circle.  Then I just worked the different stitch patterns as given, eliminating all the instructions for side shaping and instead just winging some decreases.  I just kind of decreased occasionally, and I did not keep any notes about where or how.  I found a skirt I already had that is known to fit me well and put it on the work table, and now and then would lay the crocheted skirt over it, to check that my shaping was approximately close.  I tried to remember to turn the work after every round, but sometimes I forgot.  I don’t think it matters.  When I got to the top, I ran a twisted cord through the last row of loops, and tied it at the front.  See the bizarrely foreshortened view, below: 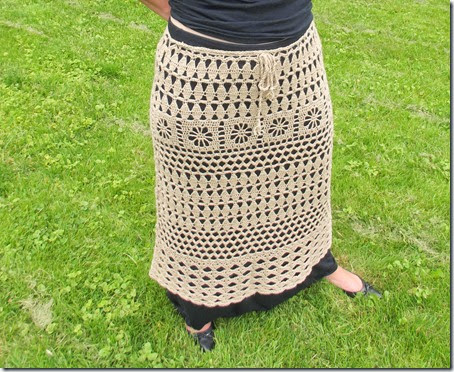 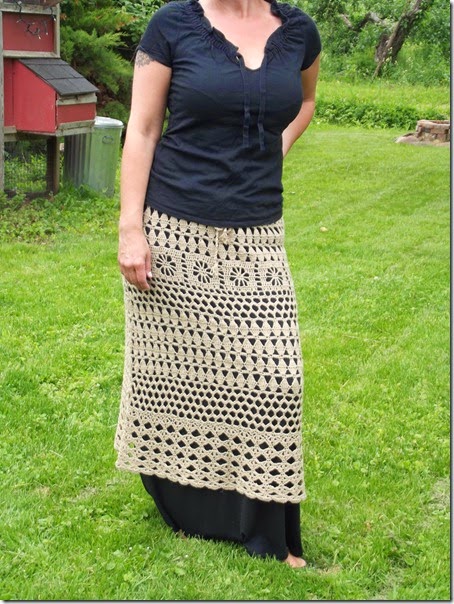 There was originally another panel of the scallops at the waist, but after blocking, it was way too long, so I unraveled that part and presto.  It fits perfectly.  Almost as if it were made to fit me…oh, that’s right, it was!  I love crochet. 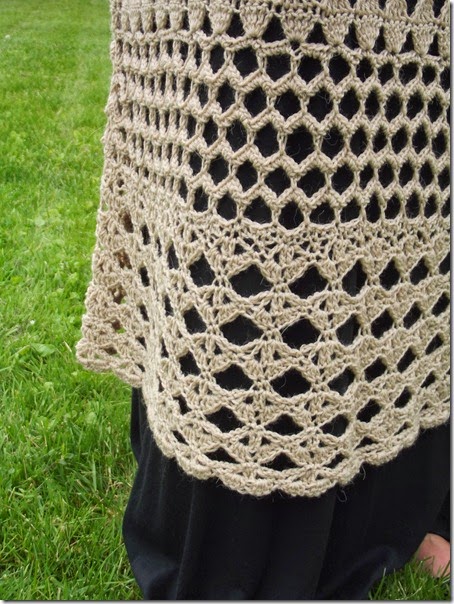 I used three skeins of Berroco Ultra Alpaca Fine in color 1208—call it “Pale Burlap”—and a US F crochet hook.  I might make a gray one now.  I think I finally have this pattern figured out.