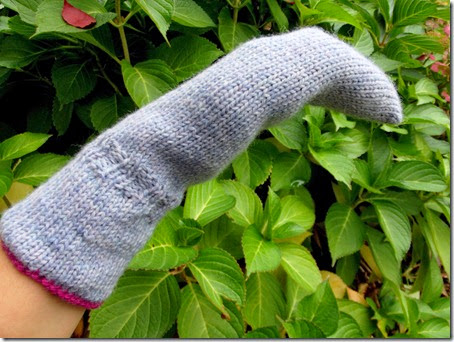 I know what you’re thinking.  You’re thinking What the heck is that thing?  It looks like a puppet, but I know it can’t be a puppet because puppets have googly eyes. 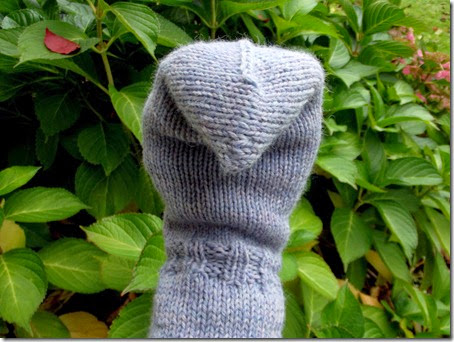 Nope, it’s not a puppet. 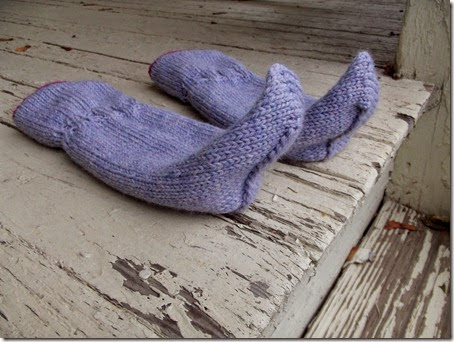 Well then—you’re thinking—is it a pair of slippers for an elf?

Golf club cozies?  Oven mitts?  Something to do with the Red Hot Chili Peppers that we’d rather not discuss right now???

Ha!  Nope.  Friends, this is a mitten.  A mitten Without A Thumb. 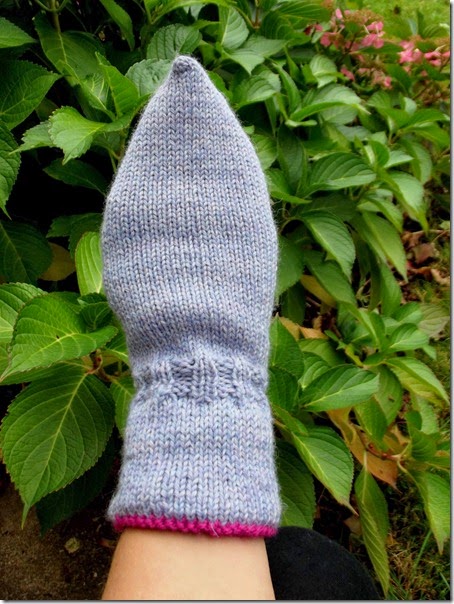 I can hear you saying (you’re not thinking it anymore, you’re saying it out loud now) that there’s no way this is a mitten, because the thumb is the thing that makes a mitten a mitten, and this doesn’t look like any mitten you’ve ever seen, but LO!  I am here to bring you tidings of great joy, especially if you live in the Northern Hemisphere where it is beginning to get a little bit COLD outside right now.  Friends, coming to you straight from the brilliant and twisted imagination of the great Elizabeth Zimmermann, this is the Thumbless Mitten.  If you’ve ever made mittens you know how it goes; you cast on merrily, thinking cozy thoughts, and you go whistling along through the cuff and the increases for the gusset, and past the hand and the lovely little decreases at the top, and you cut the yarn and weave in the ends and then the crushing realization dawns that you still have to make the thumb, which will only take like ten minutes, but which is no end of fiddly and which is somehow just deeply aggravating.  And then, like a bad rash, it comes up again on the second mitten, and knitting two thumbs is two thumbs too many!  That’s twenty minutes you’ll never get back, people!  Enter the Thumbless Mitten.  Also, let’s face it, when you’re wearing mittens, you know your thumb is freezing, all isolated over there away from it’s brethren, am I right?  You know you’re tucking your cold little thumb up into the cozy hand part of the mitten anyway.

I just think these things are the greatest.  They are everything there is to love about a mitten—that little gathered-in ribbing section at the middle to keep out the drafts, the dearth of ribbing, the inneresting decreases at the top to make them curved, you know, just like your hand is curved?  Dang.  Fantastic.  Also, they are fully lined, which you achieve by picking up stitches along the cast on edge and just knitting another mitten onto the first one.  Which means you’re really knitting four mittens here, but you know what?  You’re not knitting any thumbs.  None!  EZ, you never fail to amaze. 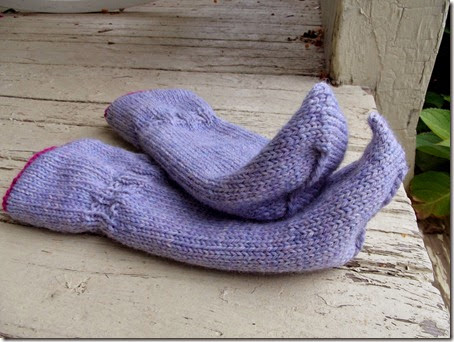 This pattern can be found in the book “Knitting Around” by Elizabeth Zimmermann.  I used one skein each of Patons Classic Wool in Orchid (the lining) and Cascade 220 in some kind of purple heather (the outside side) knitted on US 4 double pointed needles.  The doctor wanted to know one thing:  without a thumb, how are you going to put on the second mitten?   I did wonder, but I managed it in the end.  Knitters, go forth and make these.  If you’re not on board with the lack of thumbs, you can add one later.  She thought of that too.