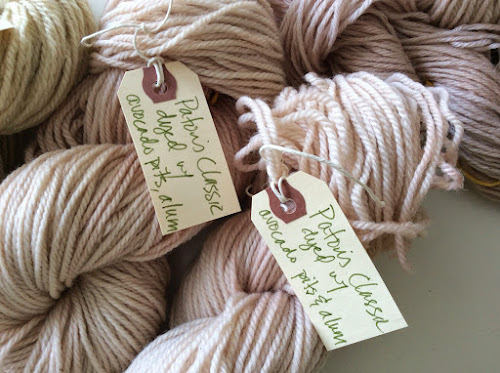 A few months ago my good friend Deb showed me a box full of yarn that she had dyed using nothing but stuff from her garden and kitchen cupboards--yarrow, tansy, purple basil, marigold, walnut, alum. She had made copious detailed notes in her lovely handwriting, and beautiful little color cards and tiny swatches, and it was all mind-bendingly pretty. Soft, variable, complex golds, greens, and lavenders that all seemed related to one another. I came straight home and denuded all the marigolds in the garden of their little orange heads, or at least I was out in the garden doing that when it began literally to snow down my neck, at which time I gave up and came inside clutching a gallon-size ziploc bag full of mariogld blossoms. I put it straight into the freezer just like that, a bag of flower heads, parked on the shelf next to the giant bag of accumulated avocado pits and skins (also for dyeing) until I was ready to get out the apron and dyepot, which, when we ran out of freezer space and the boy (home from college) had to make an effort to eat a lot of pizza rolls so we could shut the door, happened the other day. 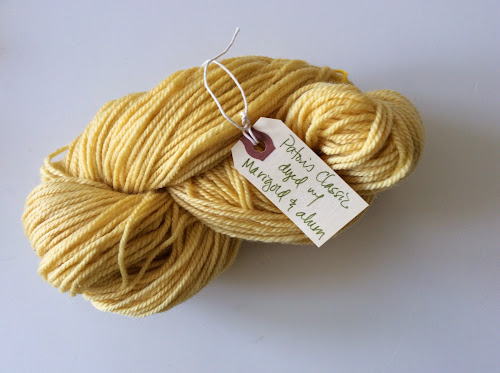 There is so much (often contradictory) information out there about how to do this, and that's kind of what's slowed me down a little--I didn't want to make a huge disaster of it, maybe melt some nice fiber, cause an accumulation of toxic fumes in the kitchen or a small explosion, whatever. I am no chemist, and my understanding of the process is absolutely nil. These kitchen and garden dyes, though, terrify me somewhat less, so even though a pot of boiling marigold flowers mixed with alum and washing soda stinks, it doesn't seem like a dangerous or incendiary stink, if you know what I mean. It just kinda smells like something you definitely wouldn't eat, so opening a window (even though it is freeeeeezing outside) seems sufficient protection against catastrophe.

I started with the avocado pits. I had 21 of them stashed in the freezer, so I put them (still frozen) into the dye pot and covered with a little water. They bubbled for a couple minutes, which softened them enough for me to safely quarter them with a kitchen knife. Back they went into the pot, with more water--six cups total--about a tablespoon of washing soda (now it is definitely not food) a tablespoon of alum (get this in the spices section of the grocery store) and a teaspoon of cream of tartar. Adding those last two to the pot gives you a cool momentary mini explosion bubbly, foamy, cauldron effect. The boy, hovering as usual over any pot simmering on the stove, said, "It's like Potions class in here." My very rudimentary understanding of what those three additives do is this: the alum, working for some reason in tandem with cream of tartar, is the "mordant" which I think just means your results should be colorfast. (If there's more to it than that, somebody please teach me.) The mordant can be added to the dye pot itself, or you can add it to a pre-soak bath (mordanting the yarn ahead of time) but I am too lazy for that and didn't have a non-food bowl around here anywhere, so whatever. The washing soda adjusts the ph of the dye bath, which in the case of the avocado pits, was supposed to help it be pinker. I don't even know if any of this is true, but that's what I did, and you can see the results: 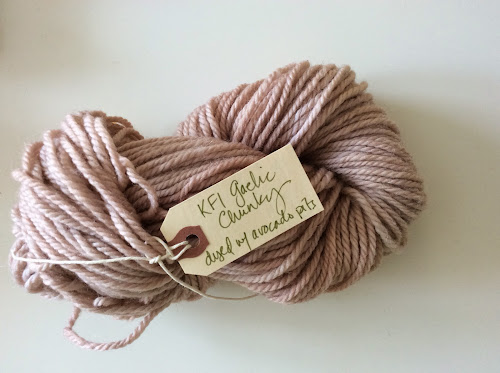 Lovely, lovely, soft, ballet pink.
I used pretty much the same recipe (whatever dye materials I was using--a gallon of dry flowerheads, and later the skins of 21 avocadoes--plus a couple tablespoons of washing soda, plus 1 T alum, plus 1 t cream of tartar) and simmered first the ingredients for 30 minutes to make a dye liquor, then carefully added the yarn (sometimes pre-wet, sometimes not) to the pot for another gentle 30 minute simmer. No stirring the pot, because boiling water and wool are very nervous companions already, and if you stir, there will be felting. Resist the temptation. 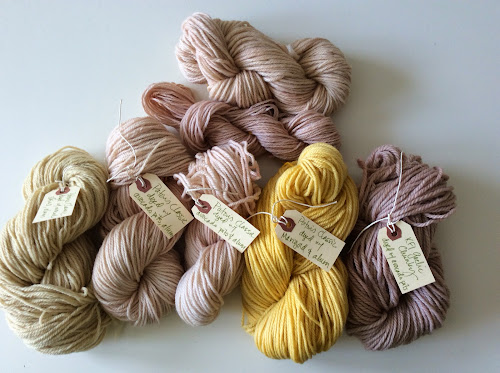 There are the results. I know, right???? In that picture, they are (from left): avocado skins, avocado pits (four skeins of those), marigold flowers, and the darkest pink on the right is the first skein to go in the avocado pit dye bath. Even though I simmered all five of the avocado pit skeins in together, the first one to go in soaked up the most dye. This whole process is so mysterious and so endlessly fascinating to me. Next year's garden will be far less tomato-oriented, and far more dyestuff-oriented. I can't wait.
Posted by Kristen at 10:00 AM