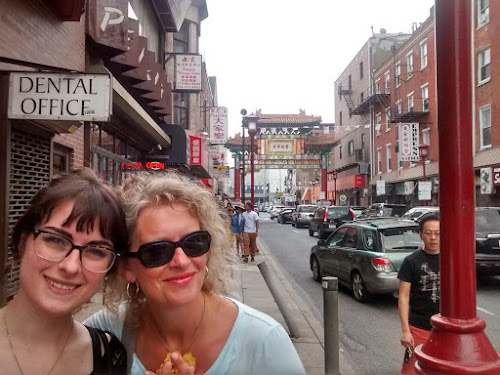 As you know, my girl lives in Philadelphia, a city not known for the gentle and the pastoral. It is known for quite a few things, I suppose--Cheez Whiz, mispronouncing "water", violent crime. Philly has a tough reputation, and I've seen Rocky, I had a few ideas about it. When she left home last fall, I wept buckets of nostalgic tears for her now-distant childhood and lay awake at night worrying and imagining all the awful things that could happen to a girl from the country living on her own in the big city. I could not fathom that we had raised her here in the woods and orchards and then waved tearfully from the porch as she drove off with her cat and her anime posters to a life in the concrete jungle. Guess what, though? Philadelphia is great, and my girl is great, too. She walks twenty blocks like it's nothing; she takes the train to Penn's Landing to watch the Independence Day fireworks (what better place to be on July 4 than in Philadelphia?) She drives her car in the city like a fearless ninja, parallel parking like a boss. She visits the zoo, the art museums. She knows where there is a Chipotle. A few weeks ago, she met Pete Wentz in Starbucks. Nothing stops her. She uncomplainingly hiked with me to Chinatown in 90 degree heat for [be still, my heart] soup dumplings, which was six mouthfuls of heaven. The molten interior of a soup dumpling can take the top layer off your tongue, and you are guaranteed to look like a miserable amateur while trying to eat them, but people? They are completely worth the fourteen blocks of walking to get there, and the minor burns sustained while eating. Soup dumplings. Get some.

I am living a lovely life out here in the country with my chickens and my cherry tree and my sunlit garden, but a big city is a wonderful place, too, and maybe it's because that's where she is, but right now, Philadelphia is the wonderfulest. Plus, I knit a whole pair of socks in the car on the way there and back. Snap.