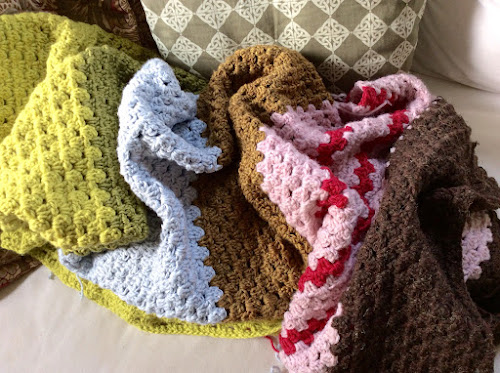 This project has evolved. Originally, I meant to make something Purl Soho-ish, beginning with the acid green and with plans to move through mustards, creams, and soft pinks. I was going to work on it now and then, when I just felt like crocheting something, okay, and it was going to be smallish, maybe throw-sized. There was no end game, because I didn't know who or what it was for, but sometimes, honestly, that is beside the point. Critically, though, it ended up being much wider than the plan called for, and the mustard yarn I chose was wrong--too thick, and also not really interesting enough. I guess I need my mustard to be more complex. And it turned out to be a fairly yucky acrylic, and working with it was terrible, so it went in the donations bag and I turned to Plan B--shop the stash. The back of the cupboard has for years hidden quite a few bags full of yarns that had either been unraveled and recycled from other, older projects, or had failed to ever become anything at all--some Blue Sky cotton, some gold Cascade 220 Superwash, and a bunch of Wool-ease, which I once upon a time bought in sweater quantities, before realizing that I really did prefer to knit with wool. So the blanket became a dumping ground for all the unwanted hangers-on in the cupboard, and nothing about it pleased me more than to deplete the stash of all those weird things, meanwhile granny-striping my way happily back and forth and keeping my lap all warm while I worked, which was nice because it was January and the cozy work of a huge crochet blanket project is quite welcome in the depths of a northern hemisphere winter. But it became hard to stay interested, and I stopped working on it much. Since I can't really crochet without looking, I couldn't fall back on my habit of making progress while binge-watching Netflix, and it had grown huge, which made it a poor candidate for a travel project. I was not/am still not sure about the color scheme--maybe it is nothing but a blanket full of yarn I don't really like? And then the lack of purpose began to haunt me. Where will this thing end up? Why am I spending my time on it? What do I want it for?

There is beauty in the process of things, I know this. Sometimes, the only value a yarn project has for me is in the work of it--making design decisions, or figuring out an interesting construction, or sometimes just the plain and simple effort of putting the stitches down, one at a time. Sometimes, there is tremendous comfort in the stitching itself, and that is enough. That's what happened here. Even though I still don't know what will become of it in the end, or whether I will finish it this week or even this year, it is there when I want the simple pleasure of crocheting with yarn. I have unraveled whole (or practically whole) blankets that bored me, to recycle the yarn, and I eventually might do that this time, too, or I might not. I really don't need any more blankets, and I'm not really sure yet how it's in any way better to have less stash to deal with but more blankets to deal with, but I do need to crochet something. Besides which, it is only 65 degrees F today [FOUL! IT IS JULY!] and the coziness of a lapful of yarn has got a certain (seasonally regrettable) appeal. All that is good enough for now.