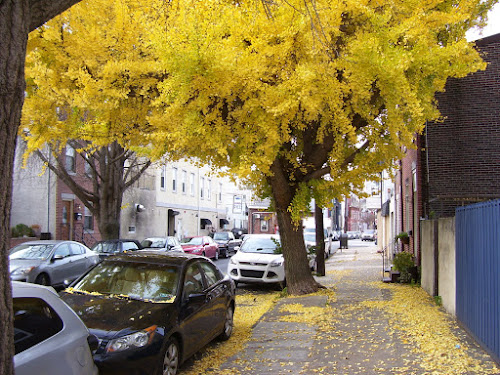 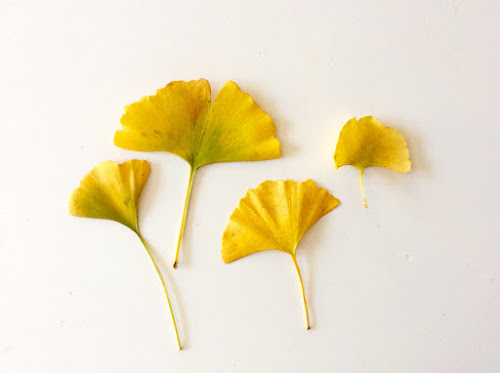 My girl's neighborhood in Philadelphia is a study in contrast. There are lovely old brick row houses with potted geraniums and mosaic murals and vintage bicycles painted turquoise parked next to the lamp posts, and across the street is razor wire and emtpy lots full of windblown trash. Gingko trees litter the sidewalks in gold. 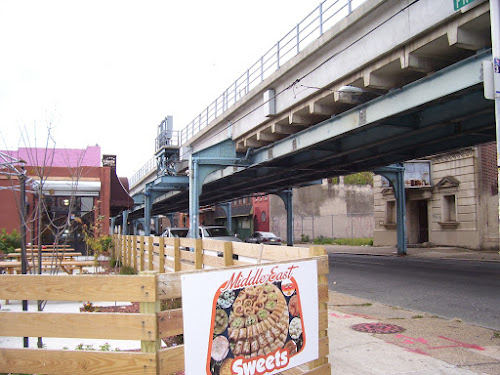 This, a corner cafe next to the train station, has fairy-lit patio seating and a dog watering station. Fancy ice cream. A decorative pumpkin on each table. Across the street: 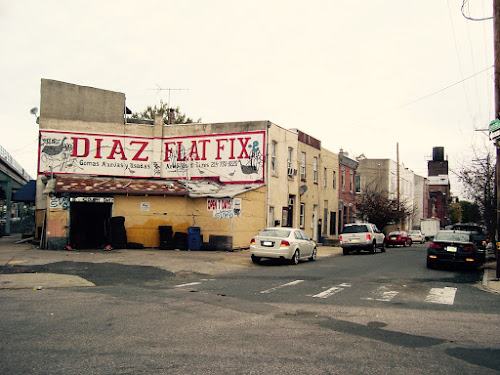 Spray-painted signs and piles of tires. There is beautiful, and there is grim. It's a neighborhood in regeneration, or else maybe this is the way it is in a city? The place is abundant with teensy dogs, being walked two and three at a time. Everyone, everyone is unfailingly friendly. Plastic bags blow around. A little girl wearing glasses kicks a pink ball. On the train, people sleep leaning against the window. 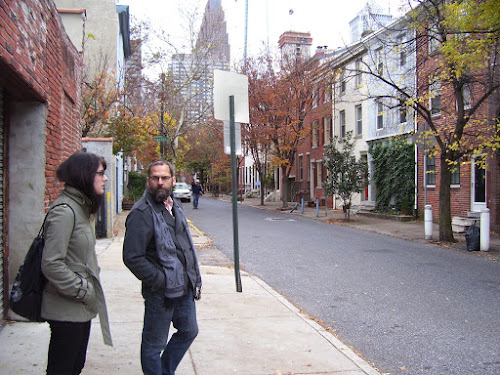 We walked forever, across the city in all directions, in search of one thing for me (soup dumplings, score!) and another for the doctor (vegan pizza!) and yet another for the girl (art). Being lazy in Starbucks on Sunday morning, we were surprised to see what could have been no other than a marathoner, wearing a finisher's medal and a safety blanket marked "Philadelphia Marathon 2015" and carrying a bag full of race swag. He was sprinkling cinnamon on his latte and whistling. More appeared, looking relaxed and pink-cheeked, if also slightly underfed. It was Marathon Day in the city. We walked toward the Museum of Art, through safety checkpoints and around barricades, once accidentally going into the wrong museum (!!) and asking at least four different clutches of uniformed police how we could get from right here to over there [" Go back to the 18th Street checkpoint." "Go up to 22nd and take a left, no more than ten minutes." "Maybe they'll let you through the barrier over there?"] It took forty minutes to hack through the race mobs and barricades to reach the famous steps by which time I could not imagine running up them. If that song had been playing anywhere, though, I would have. You would have, too. Best song in the world, ever. 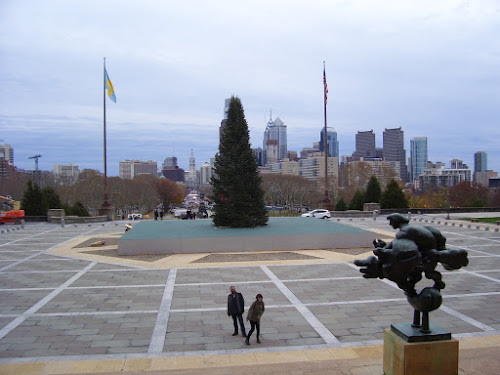 They danced a little. It is really just the thing to do up there. 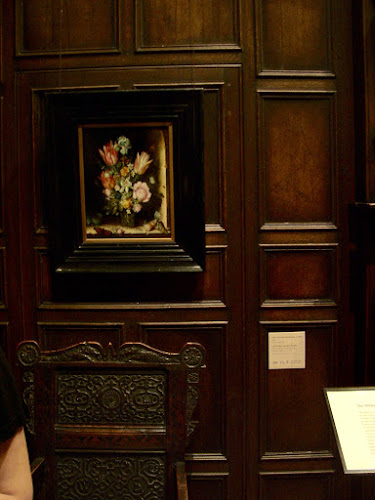 Inside, I tried to get a laugh out of the cashier by saying, "Hoo! It's crazy out there. This art better be worth it. These are the good paintings, right?" Which earned me a raised eyebrow and a tiny, indulgent sniff. Under her breath, my girl said, "That gets a laugh, like, 25% of the time," which cracked me up. We tried really hard to behave, quietly dissing the Renoirs ("Why does he have to blend everything into oblivion?") and the Monets ("That bridge over the waterfall is making me feel tense") and marveling at the Manets ("Just the suggestion of a waistcoat!") and the Klimts. A handful of docents saw us tilting our heads in mystification at Duchamp's "Nude Descending a Staircase". One said, "I look at that every day and I still don't see it." Another came over, waved an arm at us all and said, "Stand back, Im'a teach you this painting. Her eyes? [points] Her arm? [gestures] The rest is movement." Click. The other docent was all, "Oh yeaaaaahhh! Now I see it!" The best. 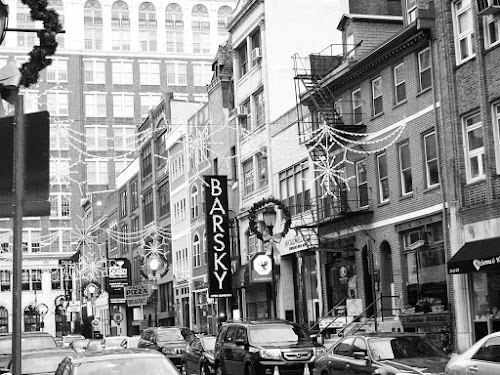 Some parts of Philadelphia look like a movie set. 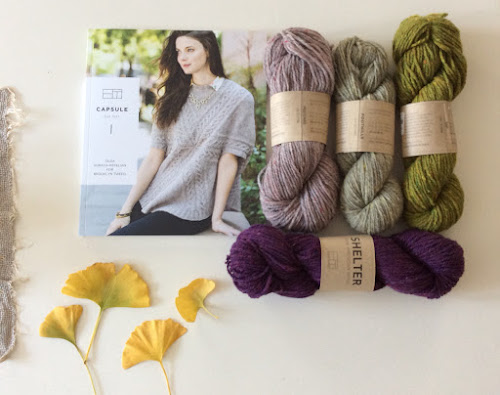 We walked down to Loop on South Street (oh please, let me live there) and I felt up all the Brooklyn Tweed and Madelinetosh. I couldn't help it with those four skeins of Shelter, dear me, it's divine.
Five minutes from home, it started to pour snow, and we came the last ten miles in a whiteout blizzard. Woke up to this: 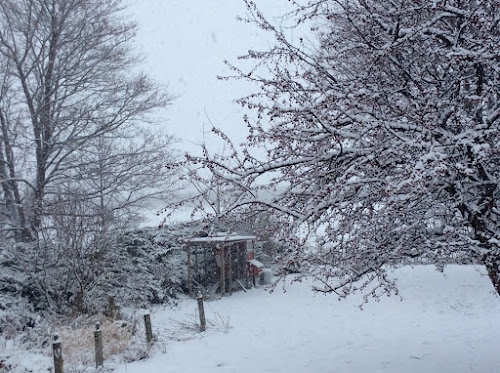 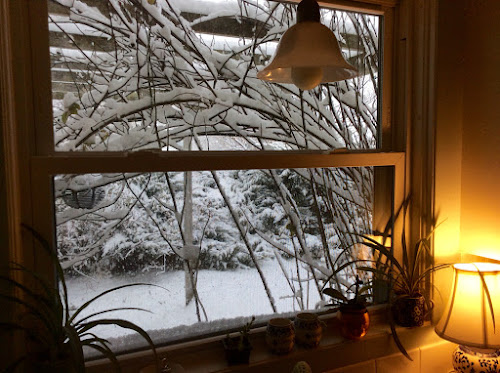 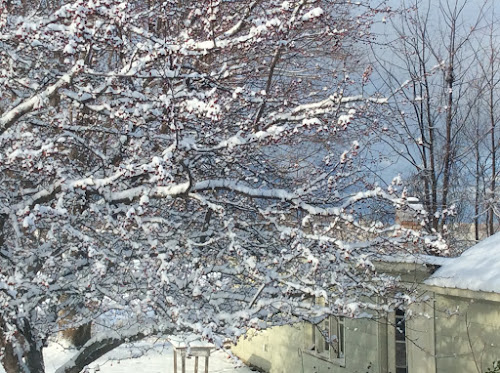 And there are leftover soup dumplings in my fridge right now.
Posted by Kristen at 10:49 AM