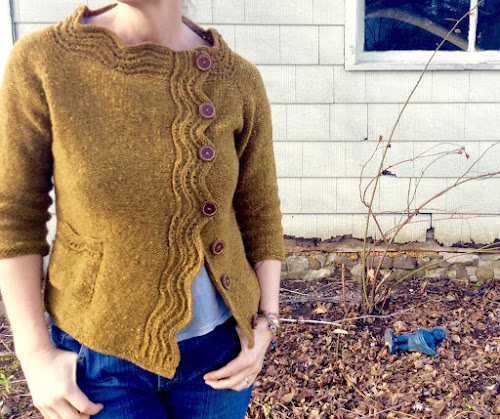 Hello there! Here I am again with another new cardigan. It looks like all I'm doing is knitting sweaters. I promise, there is more going on--I've put more rounds on the giant crocheted blanket, I covered another lampshade, we (well, he's doing it all by himself while I point out the drips) are painting the kitchen, and Catdog and I are doing another level of training classes, which is, after all things yarn-related, my new favorite thing to do. She works so hard on these good dog skills, works until she's tired, focused and serious and earnest--so earnest, it makes me ache. She is taking this being a good dog thing very seriously. I love her so. 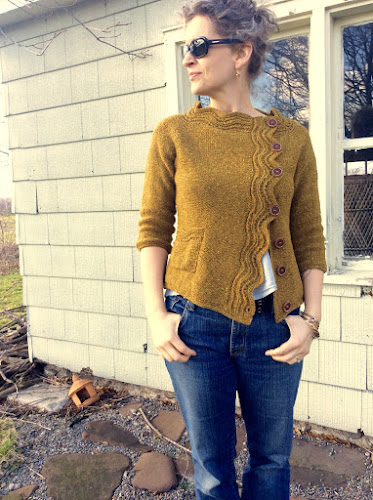 But there have been a lot of new sweaters. This one is the lovely Levenwick by Gudrun Johnston, made exactly as written and in the exact yarn suggested--Brooklyn Tweed Shelter, "Hayloft". Oh, Shelter. This yarn is like nothing else. I would not exactly call it soft, nor would I necessarily say it's much fun to knit with--it's super-wooly, but somehow kind of like cotton. It drags on the needles, which made my hands tired. But the end result is as advertised; lofty and light, and rustic and wooly. I love it, but it'll be awhile before I use it again. Also, I'm not sure I'm wearing this garment correctly. Anybody out there done this one? I don't know where to put the buttons. I've worn it like this a couple times, and people tell me it looks good and they like it, so maybe it's right, I don't know. Asymmetry is not my usual. Also, it's really only halfway to warm enough outside to have that much bare arm showing. I was shivering while the doctor took these photos. Spring won't really arrive in my neighborhood for a few more weeks.
In other news, more sweater knitting. I know. 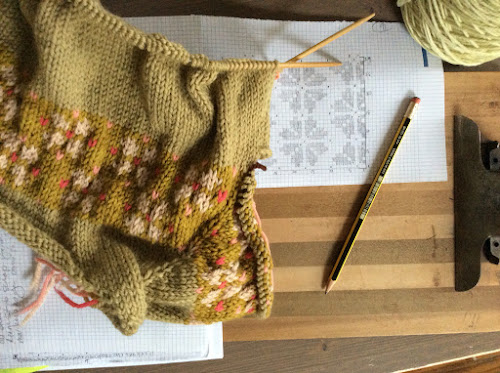 This one has my full attention right now.