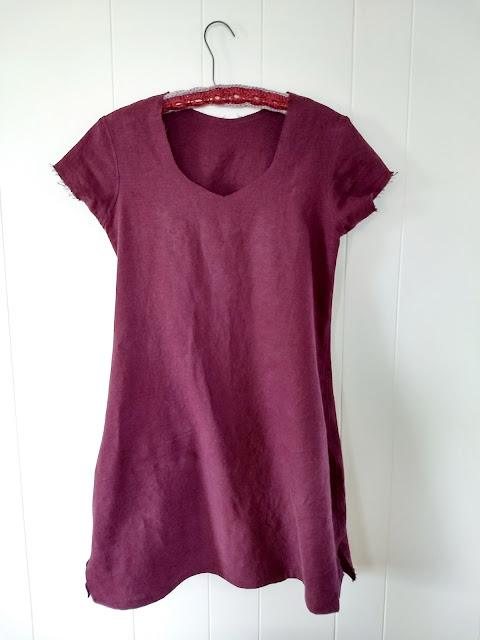 I can’t stop trying to sew clothes.  The piles of failures, you guys.  It is pretty disheartening to consider.  My most recent, most successful sewn dress actually fell to pieces in the wash, and finding good apparel fabrics is such a hopeless quest out here in the hinterlands, so when that charcoal gray linen dress that I wore and loved and looked and felt like a million bucks in came out of the dryer in shreds, I was, um, sad, and sort of decided maybe this wasn’t for me.  I got so tired of that defeated feeling, having spent the whole day bent over a project, feeling like I was getting somewhere, and then that slumping at the end, when it didn’t work.  Maybe I should just stick to sewing quilts, this is too hard, all the wasted fabric, ugh.  But...I just can’t stop thinking about it.  I bought three yards of this plum linen blend with the highest hopes, pledged to make a muslin and then did; I measured, I ripped, I tried things on, I made tiny changes to the muslin, tried things on again.  I believed I had learned something, so I gritted my teeth and cut into the plum linen, sewed so carefully, felling the seams, slowly and neatly topstitching.  And it failed.  I threw it on the floor, screamed a little, and sat down to knit, which, as you know, leaves me a lot of space for thinking.  What I thought about a lot was this quote, which is perfect.  It is about being a beginner.  Things like that, and thinking about Georgia O’Keeffe’s incredible handmade wardrobe, built by her hands in the tiniest stitches; clothes made exquisitely, with exceptional care and intention, clothes made to fit her and only her—thinking about that kind of thing just makes me keep on trying.  I want high-necked silk blouses with tightly buttoned cuffs and tiny pintucks.  I want a fine wool black dress with long sleeves and a long, slim skirt that reaches just to my calves.  I want to draw what I want, and know how to make it, and the only way to get there is to keep on trying, so here’s what I did:  I put away the pattern (note to self:  I have tried to make that dress four times, and it does not work for me, learn this...) and went to the closet, where I found a dress—from Target—that I like.  I put it on the table on a big piece of paper, and traced around the pieces.  That’s all, I just traced it.  I tried to be accurate, and to take stuff like seams into account.  I could have “trued” the drawn lines with a ruler and/or a french curve (is that what that thing is called?  I really don’t know) but I didn’t, I just traced the pieces and then cut them out:  presto, pattern.  I laid my homemade pattern on the last of the plum linen and cut it.  I sewed it.  I sang loudly to Stevie Wonder as I went, because it was giving me power and I wanted to feel powerful and it was working.  And then the dress was done.  I gave it a press and I put it on.