That time I got glue on the dog 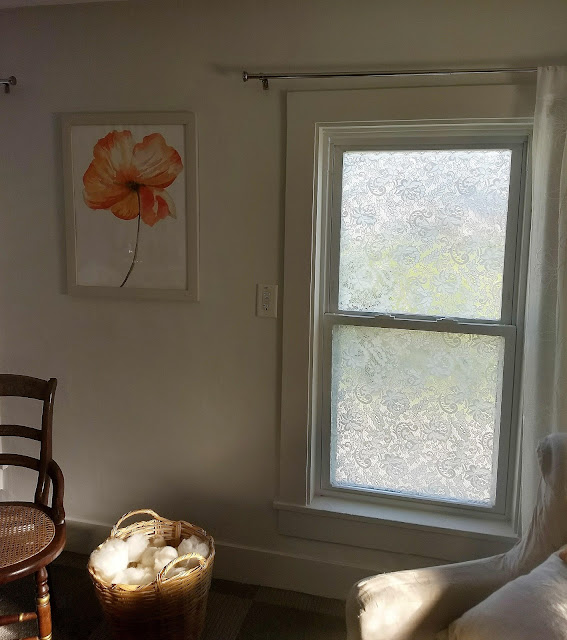 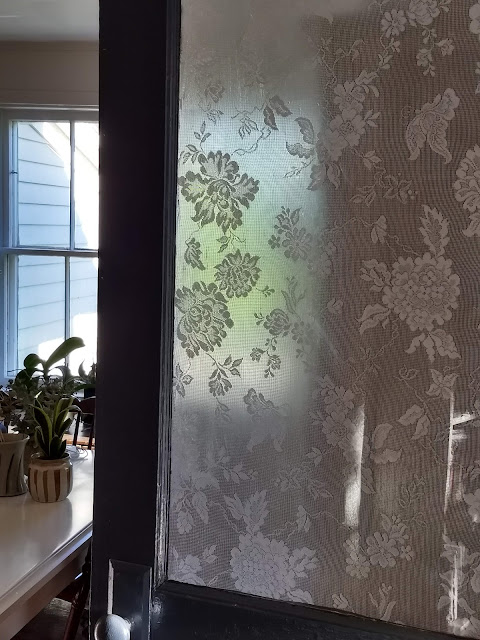 This is why I love the internet.  Awhile ago my sis wanted to know what to do about covering the window in her front door, because every time somebody came up onto her porch, the dogs jumped up and ripped off the curtain she had hanging there.  Not quite ready to just paint the damn glass black and be done with it, she asked what I thought she should do.  I suggested cutting a piece of cheapo lace curtain from the thrift store to the exact size of the glass and gluing it there.  It seemed like it wouldn’t be permanent or irreversible, and that it would let in light while preserving privacy, and that it would also look pretty.  “Actually,” I told her, “Ima do that myself, because it happens to be a great idea.”  My own front door window has been naked and bugging me ever since we painted the entire house last winter, and in general I really hate to cover up windows, but I also hate to be visible in my nightie, so I put “Cheapo lace curtain” on my thrift store shopping list and let it sit there for a long time while I got on with other things.  Last weekend, I found one at Goodwill for two bucks and decided it was time to make this project happen.  It occurred to me:  what kind of glue?  I remembered how I once used spray adhesive for some paper project on the unprotected surface of my kitchen table and how the gluey overspray marks from that little brainstorm are still in evidence to this day, and I also thought about how the same kinds of marks, left from using Mod Podge for a different project, on a completely different table, are also still there, ten years later.  It seemed like the lace curtain might have been the easy part.  Finally, I remembered how every single thing you’ve ever thought of doing has already been done before and how someone will have surely documented the process—so I googled “glueing lace to a window” and found it.  (I also remembered seeing that article before, which is undoubtedly where I got the idea in the first place.)  I enlisted Doc to help me try to cut a piece of lace, which is wobbly at best, into a neat square to the exact measurements  of the window glass, and then I mixed up a gloppy bowlful of cornstarch and water and glued it up there.  It could not have been easier, you guys.  It looked sort of opaque while it was wet, and I made a big mess on the floor and on the dog while I was painting it on, but now that it’s dry all the way, it does just what I thought it would do—it lets in the light, but keeps me from feeling like I’m on television.  Naturally, I kept going and glued more lace to a bunch more windows.  It looks so good, so light and neat, and just what I wanted.  Now my neighbor can take out his trash without fear of seeing more of me than he wants to.  A win for everyone!
Posted by Kristen at 1:25 PM