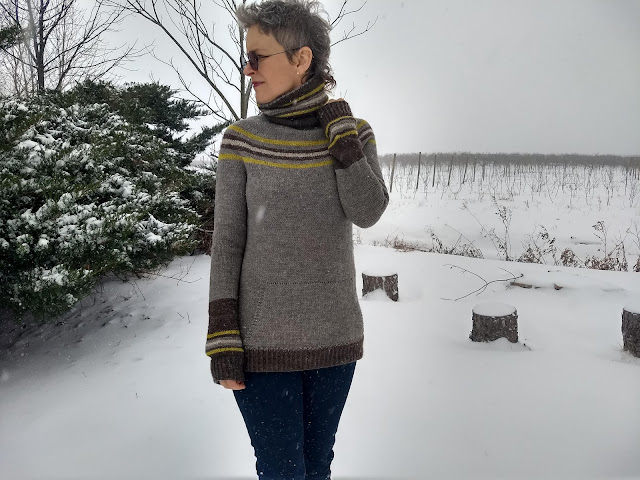 January has decided to bear down on us.  You're probably getting it, too?  Are you?  The temperatures have plunged, and the big snows have arrived.  Basically it means all my current knitting is arctic-ready.  Thick, sturdy, maximum coverage, and as much wool as I can cram in there.  I finished this one the other day and I can't even tell you how many times I've worn it already.  It's really just totally perfect.   That fit is everything.   All the coverage zones are sufficiently swathed in wool, and there's just no chance that any chilly winds will be able to sneak in.  That long body, those long sleeves, and that ultra mega collar are a suit of armor.  You're not surprised, are you, to hear that I am in love with this sweater.  The best part, really, is the collar.  Look at that thing: 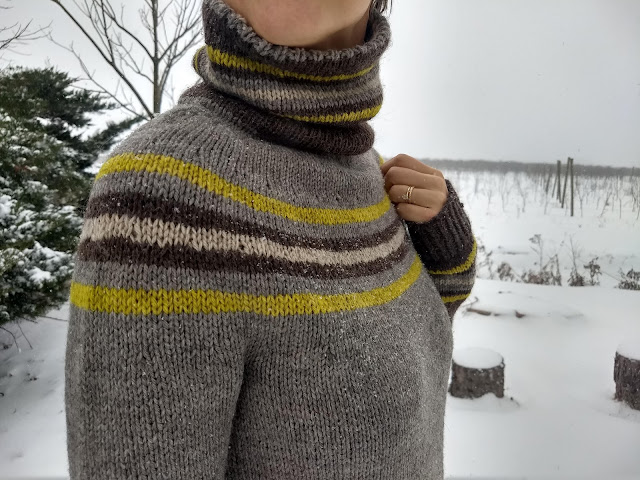 This fantastic design is "Midwinter" by Trin-Annelie.  It's cold here a lot, and it seems like it's always midwinter, so that pattern has been hanging around in my thoughts for a good long time, but the floppy, cowl collar in the designer's photos kept looking like it would bug me--I like a tall, close turtleneck, right up to my ears, and I don't like it to droop or slouch, so I had to think on it for awhile.  I also had to choose some yarn, and eventually a bunch of Simply Wool from Knit Picks in the "Wilbur" colorway finally wiggled its way to the front of the stash.  [By the way, that looks like really good yarn from here.  Plump and sturdy, and next-to-skin soft, at least for me, and obviously I am totally in love with the natural colors.  If you try it, I'd love to know what you think]. For the contrasts I used some farm yarn from Romney Ridge (in "chartreuse" and natural, which is leftover from my Humulus) and the dark brown is a glossy and gorgeous 2-ply Wensleydale (held double) which was a very generous gift from my friend Erin, who traveled all the way to Edinburgh to buy it and then decided to give it to me.  I'm so pleased to have found such a beautiful way to use it here.   Brown and gray together is so good, and those little bursts of neon just glow against it, don't they? 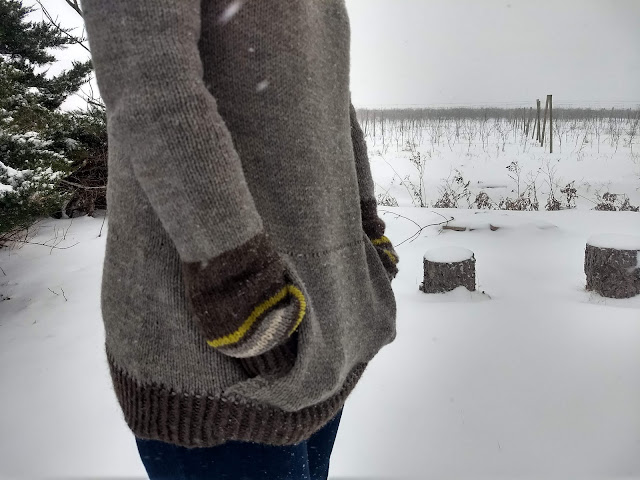 This kangaroo pocket is so extra.  I'm usually not a big fan of pockets because I don't like the bulk they add and it's not like I'm going around collecting acorns and bottle caps anymore, but this kind of sweatshirt-y pocket is so nice for warming up my chilly hands.  It's also easy to add afterwards, too, if the inspiration should strike after the sweater is finished--just pick up a row and knit on a flap, with some increases at the sides.  I hadn't thought of doing that before, but I will now. 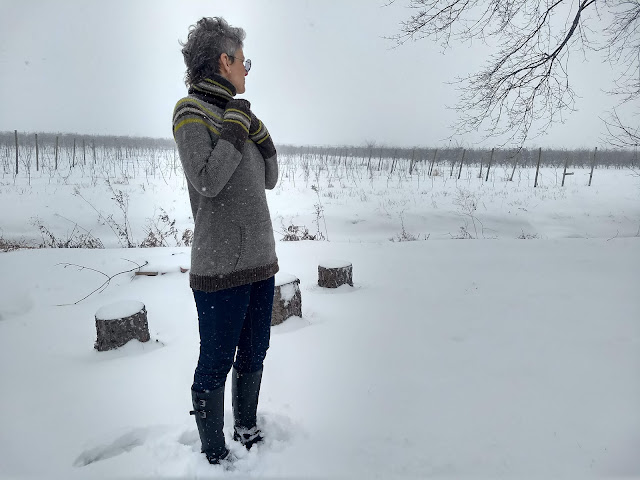 This collar is the best part:  First off, I rearranged the pattern directions quite a bit in order to be able to knit it top-down, which is my much-preferred construction method.  So I started at the neck (below the collar) and worked downwards, leaving the collar for last, and I finagled it to be closer fitting by casting on fewer stitches at the get-go.  [here's how I figured that out:  I wrapped a measuring tape around my neck, approximating the way I'd like the collar to fit, multiplied that number (18") by the number of stitches per inch in my gauge swatch (4.5) and cast on that number:  81.  Then I worked one round plain before increasing up to the number of stitches indicated in the pattern and then stuck to the pattern through the yoke.  If you've been here awhile, you'll know how devoted I am to the simplicity of this kind of pattern alteration--you just need to know your stitches per inch TIMES the number of inches of the thing you're making.  That's it, that's all there is to it!  Okay, back to the sweater...] 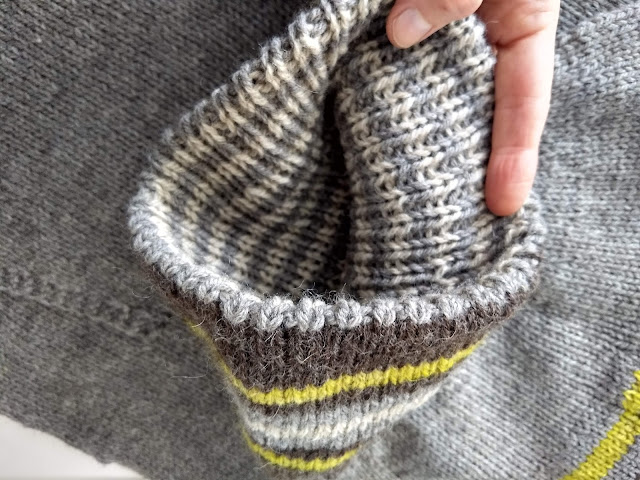 Even though the collar was going to be very tall and very close, I was still afraid it might slump down, cowl-like, and leave my poor neck out in the weather getting cold, so I marshaled my wits  and rambled about it to Doc and together we realized that a little dose of 1x1 ribbing would do the trick nicely.  I think it was his idea and he thinks it was mine, but we're a team anyway, so it doesn't matter that much.  Anyway, I lined the collar with 1x1 ribbing and guys, it was just the ticket.  That collar stands at attention so perfectly, so adroitly.  My neck will never be cold again. 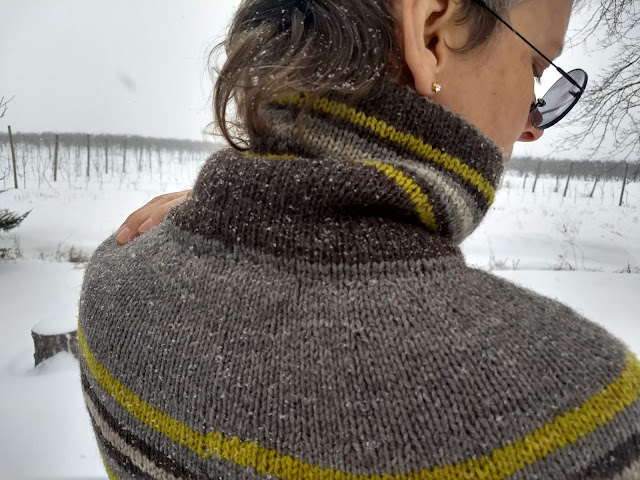 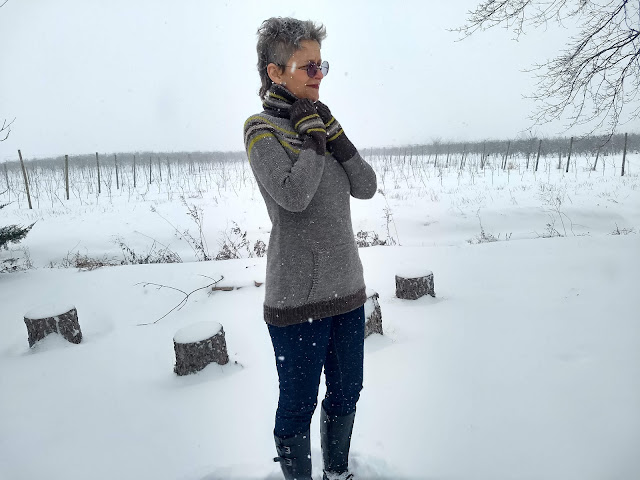 I can't imagine not knitting another one of these.  It's too good.  It's everything I want in January when the sky is wild.  Stay warm out there, friends.
Posted by Kristen at 4:16 PM