I don’t usually like the bias tape that comes in those little cellophane packages at the fabric store. It always feels very stiff to me, and I don’t like that they only come in solids. I also think they’re made out of pretty cheap fabric. I’m sure you could find some fancier ones somewhere, but I haven’t seen any.

So, because I am impulsive and lazy by nature, I always just go ahead and use what I’ve got and do the best I can do with it. Meaning, I don’t have one of those fancy bias tape making gadgets and I don’t see why I’d ever need one. Here’s all you need to do: 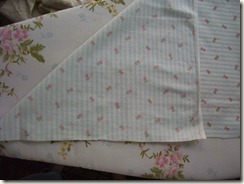 The size fabric piece you choose will depend on how much bias tape you need to make. I’m only edging a wallet, so I’m using a small piece—this is only about 12” wide—length doesn’t matter, since I’m going to cut most of it off in a minute…you’ll see. If I were making a quilt edging, this piece would have to be more like 30” wide. Okay, press your fabric and then fold down one corner so that the raw (cut) edge lines up with one of the selvedges. Or even if it’s not a selvedge, it’s okay. 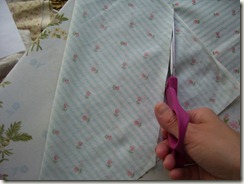 Using the folded edge as a guide, cut parallel to the fold, and then along the upper raw edge, cutting as far away from the fold as you feel like cutting, until you have a trapezoid. Geometry! Don’t freak out. It looks like this: 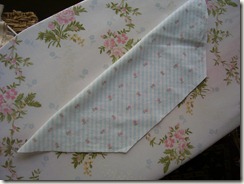 Now cut a right angle from one of the points of the short side to make a parallelogram. This all sounds so mathy. 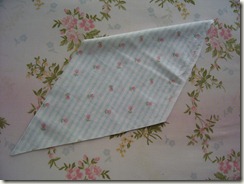 At this point, you have a double thickness of fabric, so cut along the fold. Now, the tricky part—especially if you have used a smallish piece of fabric, like I have. You want to fold the parallelogram, right sides together, so the two short opposite edges meet, but are offset by about one inch. Stay with me: 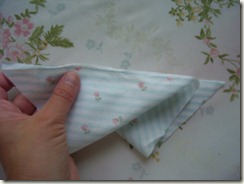 This looks weird because it’s a small piece of fabric—it’s making a tube where the seam doesn’t line up quite right. Once you stitch a 1/4” seam, it looks like this: 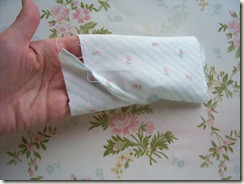 See? That’s not too wacky. (Criminy, my hand looks old. I wash dishes in the sink…)

There’s a little bit (well, one inch, or as close as you can make it) sticking out on each side. Choose the side you feel most comfortable about (which mostly depends, I suppose, on whether you are a righty or a lefty) and, taking up your trusty scissors, start cutting. 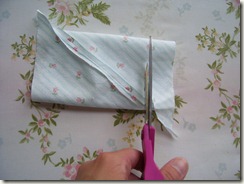 Keep going, around and around, through the seam each time you come to it, until the whole tube has been cut into a long 1” wide strip. 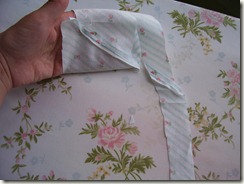 Eventually, you might reach a point where the remaining fabric, as you’re cutting, is no longer 1” wide, and there’s where you stop. We don’t do much measuring here at Cozy Things, but we do strive for accuracy when possible, and it’s a pretty good idea to have this thing be mostly 1” wide all the way down. So when it’s not 1” wide anymore, cut it off.

As an aside, I promise you do not need to measure this . If you have cut with a relatively steady hand and are reasonably good at estimating 1”, you may proceed with confidence.

Okay, fire up your iron, and with WRONG sides together, begin folding the strip in half, lengthwise, with raw edges meeting at the top. Press. 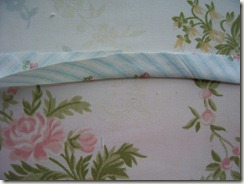 At this point, your bias tape is ready to attach to your project. I know! It has fewer folds than that stuff from the store! Hang on, sisters, it’s okay.

Begin pinning one long raw edge of the bias tape to the RIGHT side of your project, raw edges together. You’re pinning the tape to the FRONT of the project, with right sides together. Stitch a 1/4” seam. 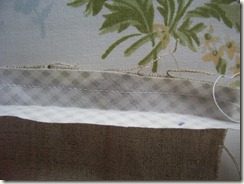 Now, flip the whole thing over. 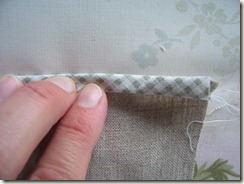 Fold the bias tape where it’s pressed (raw edges will come together) and then fold the whole thing down again, about 1/4”. You will be amazed at how readily the tape wants to do this. It acts like it has been yearning to fold down, just like that. You probably won’t even need to pin it. 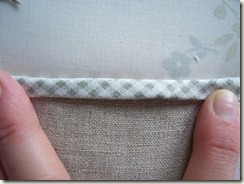 Handstitch it in place. That’s it!

Getting around the corners is its own special challenge—what I do is this: if it’s a big project (a quilt) I use one loooong strip of bias tape and as I’m attaching it to the front side, when I come to a corner, I make a right angle, folding it up toward the top and then just keep going down the next side. This results in either a perfect miter, or a stupid looking mess. If it’s a quilt, I don’t mind the stupid looking mess that much and I take the risk. (Usually, I get at least two out of four perfect miters, more with practice, hey?) But on a small project like the wallet, where all the details are really noticeable, especially if I use the macro setting to photograph it, I want four nice corners, so I use four separate lengths of bias tape and treat each corner separately. Just tuck in the ends neatly as you go and it will all go smoothly.