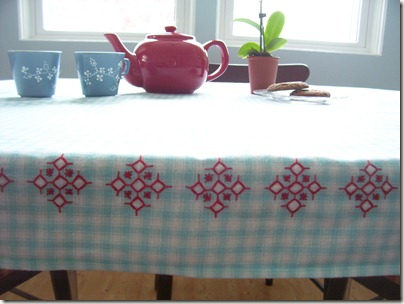 My kitchen table is not that cute. It’s a wood-grain formica-topped thrift store find which is supposed to be just a placeholder until I find something better, but in the meantime, let’s cover that thing up! 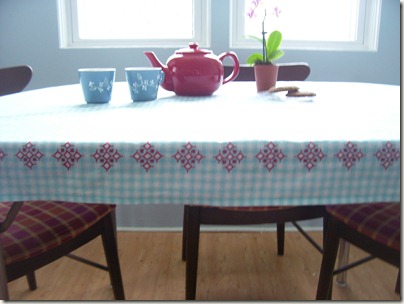 So much better, right? Will you join me for tea and cookies?

I did learn a thing or two along the way, such as: 1) there is no such thing as “quickly embroidering all the way around a tablecloth,” 2) just because something is red doesn’t mean it’s the right red and if you keep going even though you can tell the red you chose is wrong, too blue, you will have a lot of picking out to do later, and 3) ten minutes of planning will make the design better when you get to the corner. Just saying. 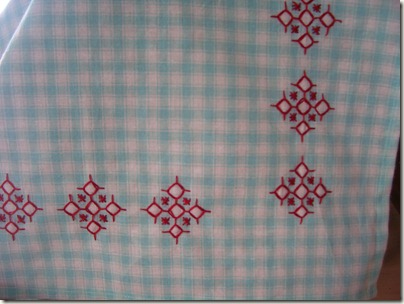 Oh, the shame. Anyway, I do like the way this turned out. It took a lot longer than was my plan (see #1, above) which is fine, since I like to embroider. I do, however, wish I’d given some thought to how the design would act when it got to the corner, and since this took a week of stitching, it wouldn’t have killed me to think that through a little. Let that be a lesson to you!

This simple little cloth is nothing more than a piece of quilter’s cotton, cut to length and hemmed—next time, I would do the embroidery first, then trim and hem, which would have solved the corner problem—and embroidered with a design from Alicia Paulson’s book An Embroidery Companion. (I really, really love that book!) 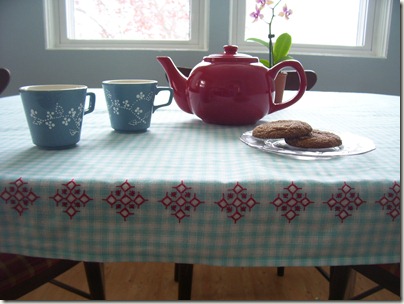 Isn’t that lovely? It makes me think of pinafores and snow-capped mountains and coiled blond braids—it makes me feel like Heidi! All that from a little tablecloth. Who cares if the corners aren’t perfect?