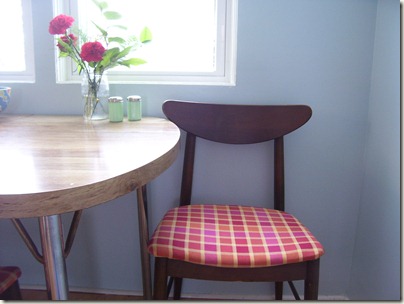 The sweet smell of victory! These things almost never work out this well, believe me. A few months ago, I was perusing dottieangel’s archives when I chanced upon her thrifty tale of scoring four midcentury chairs, which she, after a little bit of indecision and second-guessing, brought home and gussied up and which are now the envy of everyone.

Of course, months of my own searching revealed a curiously high number of chairs in this style, but each one was more rickety than the last, with screws and globs of glue at all the joints, trying to hold them together. I gave up hope a couple times, and brought home some a lot of mismatched and odd chairs, hoping they would look great together, all painted white, which they might have eventually. Painting chairs is a long-term project though, and one that needs to be repeated constantly, and then the paint gets on the walls and on the refrigerator and anywhere else someone bashes a chair into something. That happens a lot in my house.

And anyway, I have had my share of rickety kitchen chairs over the years, which I am usually fine with, at least until someone gets pinched or when one actually snaps in half while someone is sitting there. (Sorry, honey, but it was just so funny!)

Then, lo. Last weekend at the Goodwill, there were these: 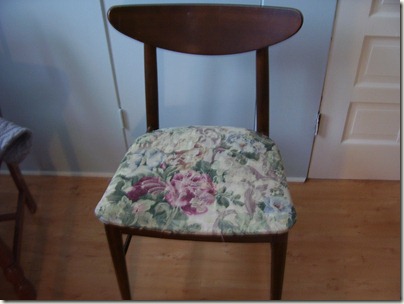 And there were four of them! And they were not rickety! And they were five bucks each, which is super thrifty. We had the small car with us, but I was not daunted, even though my husband kind of felt they would not fit in there. I knew they would, and we had to tie one to the back as if running off to California to escape the dust bowl, but they all made it home to my blue kitchen. 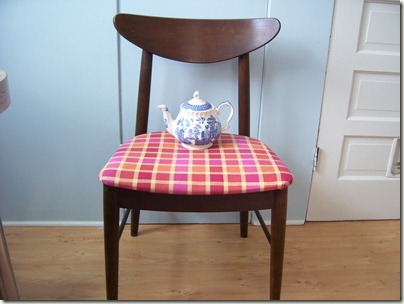 I already had the fabric (which was under consideration for curtains until I realized I didn’t want any curtains) and we easily located the staple gun and the staples, which never happens.

The chair seats were insanely easy to cover. I’m sure you already know all about this, but all you do is turn the chair over and take out a couple screws, then wrap the new fabric around, stapling as you go. You can take off the old cover and replace the padding if you think it needs it, but these were in pretty good shape, so I just stapled the new fabric right over the top. Then you screw it back on and it looks perfect, good as new.

I even had good accidental luck with getting the grid pattern on the fabric to line up properly, without even thinking of it on the first chair. It just worked out, which is how I know the angels were on my side or something. Well, that and finding the chairs in the first place, then having enough fabric already, and knowing where the staple gun was, and having plenty of staples in the house. You know, that stuff just never happens! 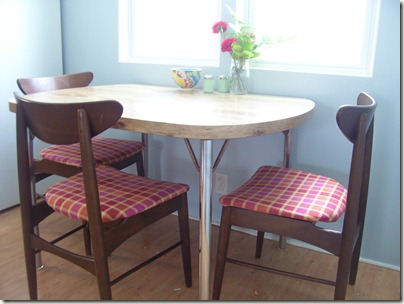 Now I’m looking for a table. Will I get this lucky again?