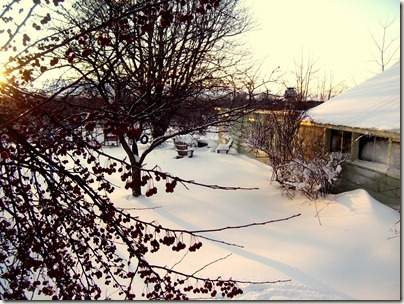 Briefly, the sun peeked out. In between malicious blasts of sleet and howling winds, it did, and it was so spectacular out the kitchen window. Look at those shadows…oh, I wish I were a painter.

The wind is rattling the window panes now, though, and I can close my eyes and imagine I am a girl living in a lighthouse, with my cheek pressed against the cold glass and the light sweeping across the iron gray waves bashing against the rocks below, and then my mother comes in with soup on a tray. Simple soup, made with pantry ingredients, and steaming hot, creamy and soothing. If I were a girl living in a lighthouse, with stormy seas raging against the walls outside, this is the soup I would want:

Heat the oil in a big pot, and add the leeks, celery and salt, and gently saute until soft, about 10 minutes. Add the broth/water and potatoes and simmer until the potatoes are soft, about 30 minutes. Whip up the soup with an immersion blender (or just use a potato masher) and continue simmering another 15-20 minutes, to deepen the flavors. Remove from heat and stir in milk. Serve immediately, topped with a drizzle of olive oil, parmesan, and coarse ground pepper.

Simple, easy, and delicious. Summer is coming, and then I will go on all rhapsodic about my iced coffee, but until then, it’s all about the wind outside, the cat on my lap, and the hot soup.