Then and Now quilt 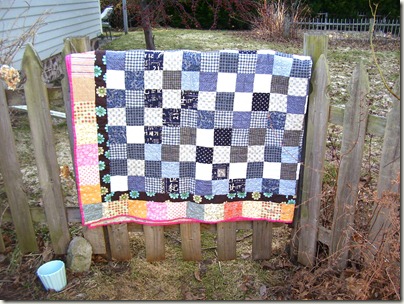 Here’s a new quilt, all finished.  I gotta tell you, I’m glad to have this one in the out basket.  I’ve been working on it for quite awhile.  How long?  Here’s a hint: 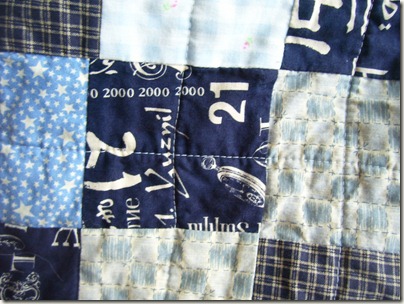 Yuznil, indeed!  Yes, that is some pretty embarrassing Y2K fabric.  Some of those other blue checked thingies were in the stash before that, even.

Back in Yuznil, er, 2000, I decided that my five-year old son needed to have a blue and white quilt, what with sleeping in a big boy bed and everything, so I went to the stash and just pulled out everything that was blue and not too flowery.  Feeling clever, I added the Y2K fabric because it said 2000 on it, and would therefore remember forever what year I had made the Boy’s Quilt.

I haphazardly chopped the fabric into squares ranging in size anywhere between 3 1/4” to 3 3/4”.  (I wish I could say this was before I had a rotary cutter, but it was not.)  I arranged them in piles of lights and darks, and then pieced them in little blocks of four squares.  I didn’t even count them.

When it looked like there were enough, or a lot, or whatever, I pressed them all, stacked them up, and let them sit there for eleven years.  At some point, they got shuffled into a box and forgotten.

A few weeks ago, I was out in the bins, hunting for something, and excavated them.  I thought, “Ooh, I should just sew those together.  It wouldn’t take very long.”  I showed them to A (that’s the Boy, who of course is now almost 16) and he said, 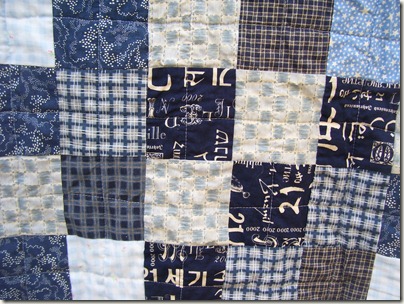 Well, I already had all those blocks!  I know, you’re thinking I should’ve just donated them to the thrifty craft store and walked away happy, but I didn’t think of that, okay?

So I pieced the blocks together, and it was blue and white-ish, and that’s all.  Which, of course, I can’t stand.  It was also pretty small, so I pressed it, folded it up, and let it sit there again, putting it in grave danger of finding its way back to the bins.  Truthfully, I didn’t like it.  Y2K fabric!  Yargh.  All blue and white!   Ugh.

Luckily, I’m in a Finishing Stuff kind of mood, so I kept thinking about it, trying to find a way to make a quilt out of it that somebody around here would like.  Finally, it hit me, and I stitched on a border of pretty, flowery pinks, peaches, and oranges.  A sherbet border.  Whew. 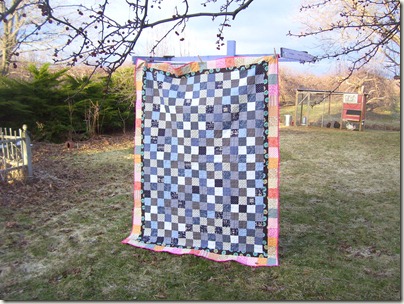 It took another age and a half to get around to quilting it, which, once I sat down and did it was the work of two hours at most. 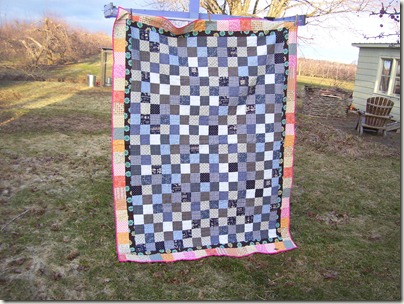 Of course, now I’m looking at these photos, I can see that another outer border of blue would’ve been just the ticket, but I am not, repeat NOT, going back in and working on this thing any more.  It is done! 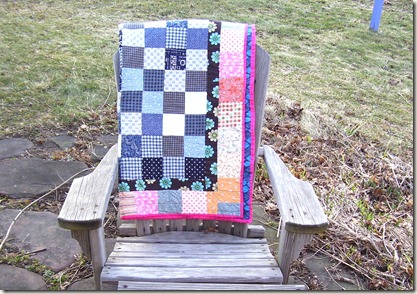 I guess it is pretty nice.