Holiday at the Circus Socks 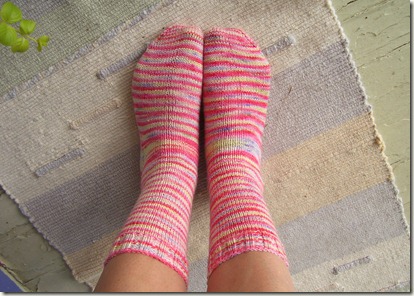 These went so quickly I didn’t even have time to worry that I was adding another project to the queue.  They were born purely out of the desperation of needing something to do while spending twenty hours riding in the car, but not being able to work on anything requiring peering at the pattern too much.  Wow, do I hate road trips.  They always seem like they’re going to be so great, all that Route 66 nostalgia is such a wonderful thing.  I imagine going down little country roads and finding some hidden gem, like a diner with foot-tall pie, or some beat-up fisherman’s shack with huge and amazing fresh-caught shrimp.  That does happen sometimes, and when it does, it’s gorgeous.  Really, though, you’re mostly just blasting down the highway at top speed, trying to get there as fast as possible, and I just find that exhausting.

So I cast on the first sock at home, and by the time we arrived at my mom’s house, I had finished it.  I cast on the second sock before we left, and since there was only one road-construction-related traffic jam (you have to have at least one, or it’s not a proper road trip) I didn’t have time to finish it until yesterday, but knitting them saved me from the crushing ennui of sitting in one spot for an entire day, and now I have an excellent pair of cozy socks that look like a circus tent to show for my time.  That’s a win-win!  This yarn is Claudia Hand-Painted Yarns in the colorway Freesia.  I love how it came out striped, and only pooled a little, when it had to, when I worked around the gusset.

If you’ve never knitted socks before, but would like to try, here’s how I do it:  Cast on 60 stitches (or 64 if you like a little more room) on some US #1 double pointed needles.  Knitting in the round, work some kind of ribbing, whatever you like, for about 1 1/2”.  Then change to stockinette stitch and just knit around and around until the sock is…a good length…I use one of the needles to measure this, just knitting until the piece is as long as the needle is.  Now make a heel flap:  working on half the stitches, work back and forth, slipping the first stitch and every other stitch on the right side rows and slipping the first stitch and then purling across the wrong side rows.  Do that until your heel flap is a square (you’ll have about 17 slipped stitches on each side of the flap.)  Now turn the heel, which is just working a bunch of short rows (there’s a good tutorial here) and pick up your slipped stitches for the gussets.  Working in the round again, decrease at each side of the instep every other round until you’re back at 60 (or 64) stitches, and work even until you’ve reached the length of your foot.  I always try it on, and when my pinky toe is covered by the sock, it’s time for the toe.  Decrease twice at each side on every other round until you have 24 stitches remaining, and then Kitchener the end closed.  Weave in your ends and you’re done.

I really encourage you to try it—break the construction of the sock down into it’s components:  cuff, leg, heel flap, turn heel, gusset, foot, toe.  Once you start seeing them that way, rather than just reading the instructions for a pattern, you will be free to knit happily on a long car trip, whiling away the hours and looking out the window at cows in the pasture and not even caring if you’re stuck in traffic.  I’m serious, it’s the best thing in the world. 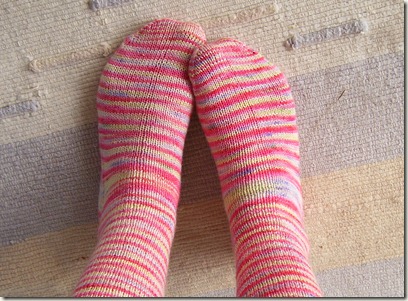