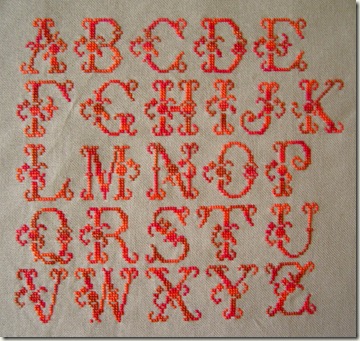 I can’t even believe it’s July already, where is the summer going?  These days are in such a hurry, I don’t even see them as they fly by.  I guess I do fill them with stitching of one kind or another and I should probably spend a minute or two here and there pulling some weeds in the garden.  I just can’t stay interested in the garden, I don’t know why.  I always think, all this work and dirt and sweat for a little lettuce?  A garden feels kind of obligatory when you live in the country, and I know I should want to garden…well, after twenty years of gardening, I might be kind of over it.

Anyway, this little sampler is finally finished—those last five letters seemed like they were going to take forever, and of course the Z had to be extra-complicated.  Looking at it now gives me a new respect for those who design these things—I mean, how do you arrange twenty-six letters that aren’t all the same width in a pleasing way?  Since I was using just one color thread throughout, I went for simplicity and was hoping it would turn out somewhat square, but I should have thought to center the rows.  Well, it isn’t so bad.    Next time, I suppose I should drag out the graph paper and spend a few hours doodling the overall design, but that just isn’t my way.  Pick up the needle and get going, I say!

This somehow has kind of an Old West feeling about it.  It looks like something Miss Kitty would have made on her days off from being a saloon girl.  I like how the elaborate curly-ness of the lettering contrasts with the plain-ness of the monochromatic color scheme.  I used “Wildflowers” by Caron in “persimmon” on a mushroom evenweave ground, and the lettering design came from Alicia Paulson’s book “An Embroidery Companion.”  I still have to find a frame—it’s  too big for the one I thought would work.  Off to the thrift stores! 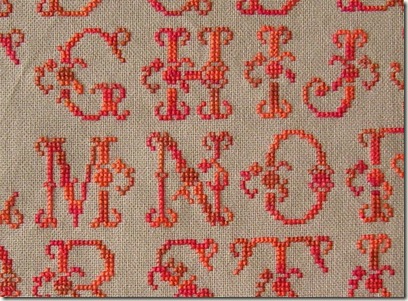