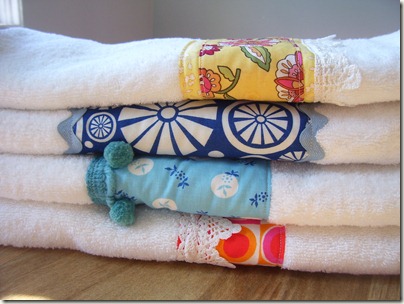 A few weeks ago, I found a white, terry-cloth shower curtain at the thrift store.  I had visions of a white-on-white bathroom, looking like a room at the spa, complete with natural sponges and all the shampoo decanted into matching, label-less bottles, you know, the whole thing just completely spotless (which would never ever happen in my house; a spotless bathroom?  Hahaha!) but I am of the opinion that a trip to the thrift store is the first and best solution to any problem, so I brought that shower curtain home (wait, don’t I have about ten shower curtains already?  Yes, I do.  I like a new one for each season!  And a couple to spare!  And I like to have choices!  And also I can’t resist anything that has a Shabby Chic label and costs five bucks) and I threw it in a hot-water wash.  You know, as you do.  Naturally, it shrank.  A lot, and in a weird way, a way that meant it could never be a shower curtain.  I was a little bit brokenhearted, but nothing goes to waste around here, not if I can help it. 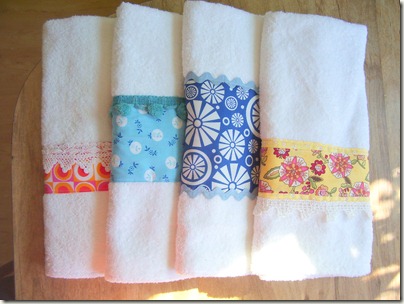 I cut the curtain into a bunch of 14” x 27” pieces, based on the measurements of the hand towel that was hanging in the bathroom already.  Then I trimmed one piece with scraps from around the workroom, and paired it with another piece, putting wrong sides together and stitching around the edges, then turning, pressing, and topstitching all the way around again.  (The Bernina, newly home from its most recent trip to the hospital, made a terrible honking noise most of the way through this process, and I was on the verge of losing my patience with it altogether, when suddenly it stopped, so I am determined that machine is actually fixed.  I may be in denial.)  Then I made a bunch more towels. 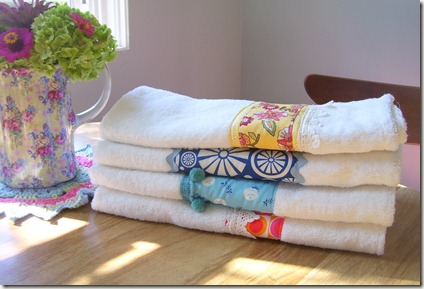