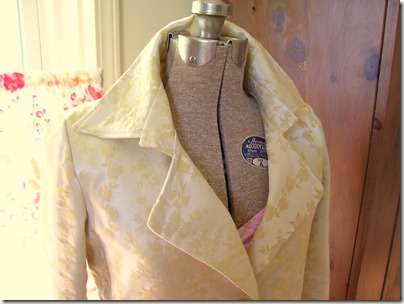 Score!  I love the sweet smell of success.  Look what I made!

As I’ve said before, I am not so big on following a pattern, and most of the time I get away with it because either I’m knitting (which I have pretty well figured out) or because whatever it is I’m cobbling together doesn’t really have to fit somebody when I’m finished.  Not so, of course, with sewing clothes, so when the time came to turn a piece of satiny furniture upholstery fabric into something I could wear, I went and got McCalls 5525, on the advice of MaryMargaret, who had seen a beautiful coat made from that pattern by The Selfish Seamstress (that blog is my new favorite thing.  I keep laughing right out loud, making my family keep saying, “What is so funny over there?”) and thank you all for your fantastic suggestions!  I kind of want to make one of each of them now.  Well, I just might, you know me. 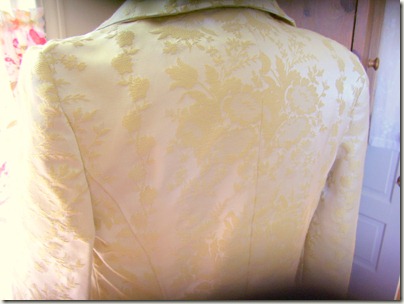 I decided on this pattern because it looked like the one I would need to do the least amount of tinkering with.  My seamstress tinkering skills are not really up to code.  I’m thinking of the difference between a cook who always uses a recipe and follows it to the letter, and someone who just knows what will work and just tosses stuff in the pot, with lots of sniffing and tasting and adjusting.  The recipe cook will probably make a nice dinner, and it’ll taste pretty good, no complaints.  But the cook who really knows her ingredients and techniques, and can use a recipe as a jumping-off place—she just might end up with something wonderful.  Of course, it could also end in some kind of huge mushroom cloud, but she takes the chance, right?  Well, with sewing clothes, I’m still pretty much a recipe cook, but I have aspirations to the next level of mastery. 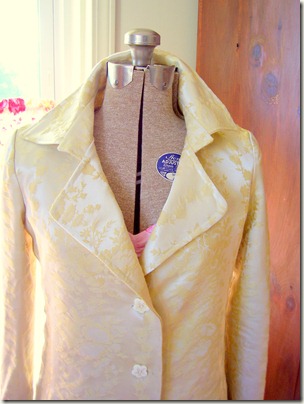 This thing just gripped me in its jaws and would not let me loose!  For the past two days, I have done hardly a thing besides pin, baste, iron, and stitch this jacket.  I missed a couple meals, and may have lost a couple pounds, too, although some of that may have been water weight, due to the flop-sweats I suffered while putting in the buttonholes.  Buttonholes intimidate me.  This tutorial was a huge help.   Full disclosure:  two things kind of went wrong with it, both of which were my own fault and which I had coming to me (see discourse above, re: me not following the pattern) and which happened mainly because, looking at Elaine’s coat, I made the early decision that I wanted mine to have, like hers, a slim fit, and that to make that happen, I should “take it in at all the seams.”

I mentioned I’m a recipe cook?

It’s too small for me.  I know!  My own fault.  There was plenty of fabric, and if I had just made it in the size I am, which is the size I cut out anyway, before I sewed it together with an astounding seam allowance, it would have fit and been great.  So that’s the first thing that went awry, the second being that knowing it was going to be too small, I failed to make the lining as small as the outside part of the coat.  I know!  What an idiot!  I knew it was wrong, as I was sewing the lining with a more realistic seam allowance, and I could visualize the bunching, and also the wailing and rending that would follow after I painstakingly hand-hemmed everything and tried to put it on, but I just couldn’t stick to my guns.  So the lining is a little bunchy at the hem and the sleeves and back are tight. 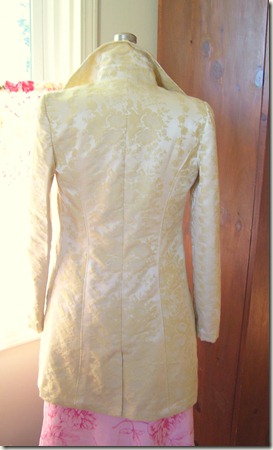 It’s so tight, I can’t wear it to the symphony (like I was ever going to do that!) because I can’t clap my hands.  I probably couldn’t even turn the pages of my program.  If I wear it too long, my arms will fall asleep!  I can’t even put it on in the first place without performing a couple advanced yoga postures, and I’ll need the help of a lady’s maid…I tried to put it on by myself and pulled a muscle in my neck… 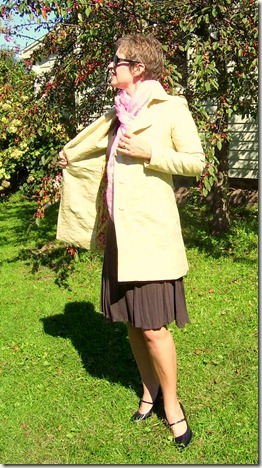 I exaggerate.  Actually, I think it really looks pretty great.  I said I wanted a fitted back, and boy, did I ever get one.  Look at that!  Oh man, I love that.  It looks just like I wanted it to look. 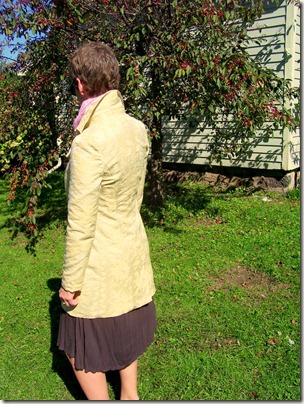 This thing fits me like a glove.  This is a garment with structure.  This is a coat that makes me feel like I hang out with Lord Byron.  This is a coat a girl wears if she doesn’t mind suffering a little for the sake of looking fabulous.  If only I didn’t need to move my arms. 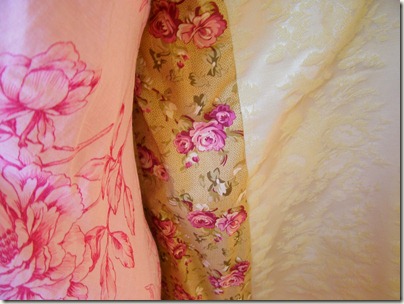 Don’t forget to look at the lining!  Whoo, that’s so pretty.  So here’s what I did:  I started with McCalls 5525, intending to make the long version, minus all the flaps and tabs and epaulets (for heaven’s sake!) and so I cut it all out and sewed some of it together.  Then I decided I’d rather have the hip-length version, so I chopped the ends off all the body pieces—which, surprisingly, didn’t come back to haunt me at all.  And then I pretty much left my family to fend for themselves while I put the entire coat together in a two-day marathon of sewing.  Dishes piled up, they ordered pizza, and now I have this. 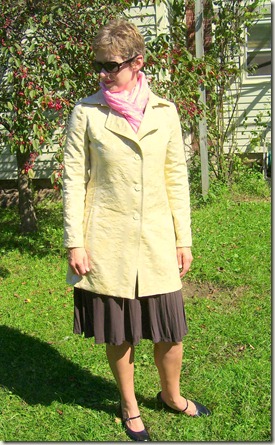 I feel like a rock star.  I think Elton would be impressed. 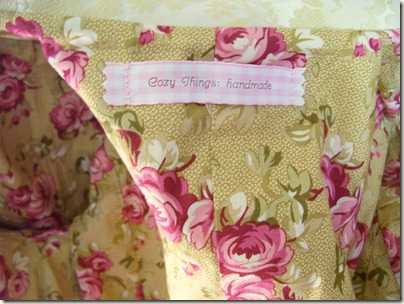