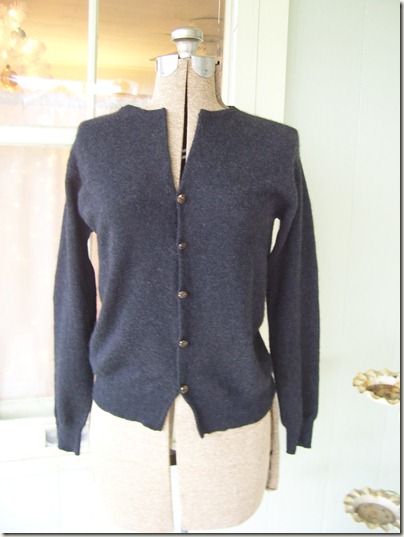 How clever do I feel today?  Pretty clever, indeed!  You may recall that I have a fabulous new dress that I want to wear, but alas, it is sleeveless, which, despite our freakishly warm temperatures lately doesn’t play at all in New York in November.  So I hunted through the closet, looking for a cardigan I could pair it with, but found none.  I did, however, find a cashmere (cashmere!) crewneck pullover scored from the thrift store several years ago (years!) and have never worn (not once!) because the neckline was way too high and I felt stupid in it.  It survived quite a few wardrobe purges, though, because, and did I mention this already, it is cashmere.  So I got out my scissors yesterday and made it into a cardigan.  Whaaat?  I know!

As usual, I didn’t take any pictures of the process—it appears I usually get these brainstorms after dark and so the light was too dingy for a photo tutorial.  It was easy peasy, though, and here’s how you can do this to your own clothes:

1.  Fold the sweater in half from side to side to find the center.  (Alternatively, you could measure, but measuring is really not my style, what can I say.)  Make a small snip at the hem edge and carefully cut, following the column of knit stitches, up to the collar.  Be careful to cut only the front layer.

2.  Turn the front edges toward the inside 1/4” and pin.  Using a matching thread, handstitch the hems down.  I used a small blanket stitch, which makes a tidy edge.  Just as with steeks, you don’t have to worry about it unraveling.  The stitches aren’t going anywhere; you just want the edge to look neat.

3.  Choose some excellent buttons and the same number of snaps.  Decide where you want them to go, and sew them on; snaps first, then buttons on top.  They’re not functional, they’re just there to look pretty.

That’s all there is to it.  It’s a bunch of handsewing, but you’re crafty!  You can do it.  No fine gauge pullover is safe from me now.  I’m looking at a lot of my clothes in a whole new way. 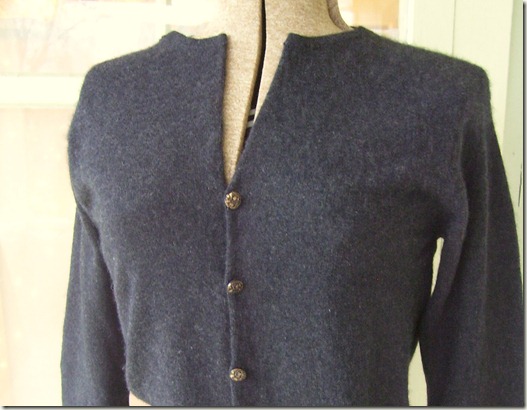