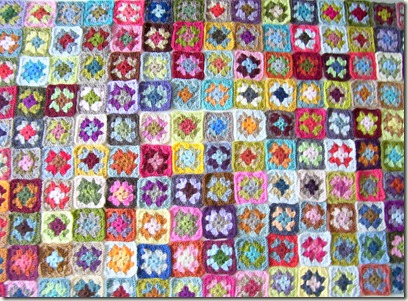 Yesterday, while the family was huddled around Season One of Ice Road Truckers, I decided to block the first half of the grannies.  I thought I had done two hundred so far, but a rummage in the bag revealed I have actually done 210—that was a nice surprise.  In the end, they’ll have another round all done in the same color as I join them, and I don’t know what color yet.  Originally the plan was to use white, but now I’m leaning toward very light pink; what do you all think?  Too girly?  Or just girly enough?  It might end up coming down to how many skeins of the same pink I can put my hands on when I’m ready to start.  That’s just my way, I like to spend six months painstakingly stitching something and then make a hasty decision at some uncritical moment that I will likely later regret. 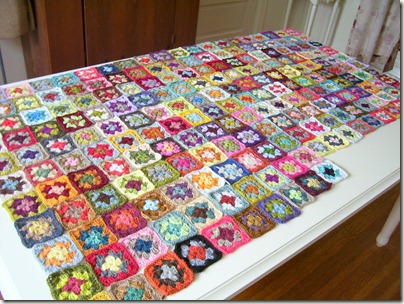 They almost totally covered up the table.  This is half of them.  Yikes.  So many scraps.  So, so, so many.  And still, my love for the grannies is undiminished.