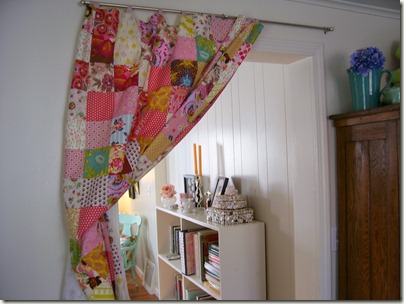 This doorway separates the living room from my work room.  During the cold weather months, we light the fire in the living room every day and hole up in there, watching television all squashed together on the couch, or I sit in the chair in the corner and play with yarn.  Sometimes they turn off the TV and just watch me knit.  I know!  It is that fascinating.  Awhile back, I was sitting there, starring in The Yarn Show and shivering, and it occurred to somebody to hang a blanket over the doorway, to trap in the heat.  Dean found a curtain rod in the attic and hammered it up there, and we threw an old coverlet over the bar, and it quickly became obvious that this is the thing to do in a New York winter.  It was so cozy.  (You mean I don’t have to wear long underwear in the house?)  The living room turned tropical.  We never wanted to leave it.  We ran to the kitchen for snacks and then hurried back to the warm room, and everyone else yelled, “Shut the curtain!”  The warm room became home base for the months between Christmas and Easter, and we lay on the rug in front of the fire, playing board games and watching all the Lord of the Rings movies in a row.  We napped together in a big pile, like hamsters.  The teenagers hung out with us in there, because it was the nicest, warmest, coziest place in the house.  That curtain brought us together as a family.  I cannot overstate this.  It did, a blanket hanging over a curtain rod made my teenage children spend time with me.   I just realized that, just now.

So it stayed there all winter.  That coverlet was pretty ugly, though, so this year I got around to making a real curtain. 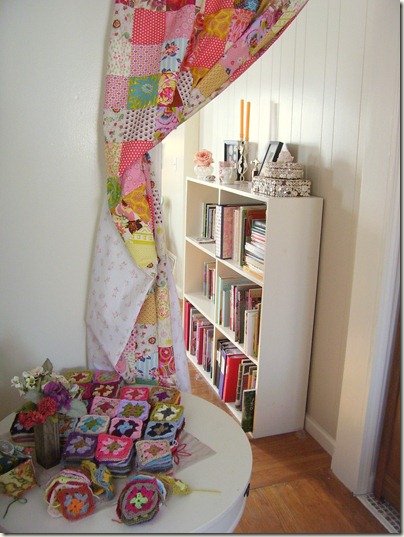 I pieced 4” fabric squares into 15 columns x 22 rows, and backed it with a thrifted bed sheet.  This had to look good on both sides, and I loved the soft tiny roses on white for the flip side, the warm room side.  I didn’t use any batting, since I wanted the light to filter through it a little, and I also didn’t want the weight of it to bend the curtain rod.  I laid the top and backing out on the floor with the right sides together, tucked some folded lengths of grosgrain ribbon along the top edge and pinned it. Then I stitched all the way around, leaving an opening at the bottom for turning.   That’s it, there’s no quilting. 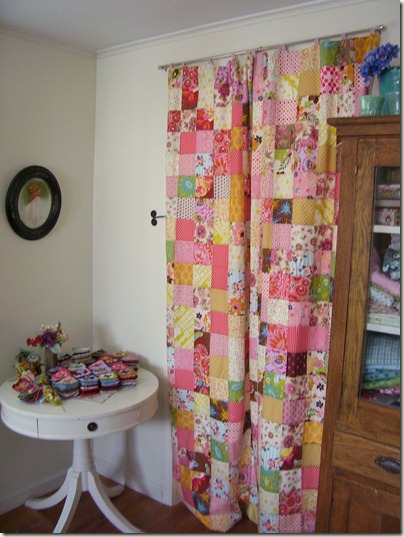 When spring comes, I’ll take it down, fold it up and lay it on the shelf, and I’ll be so glad because the house will feel huge again, and lighter, and the kids will retreat again to their lairs.  Or maybe they won’t.