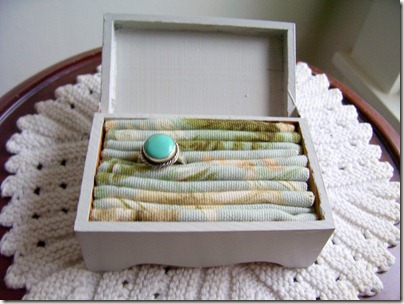 When I was little, I had a shell-colored jewelry box where I kept all my treasures.  There was a plastic ballerina inside, with one plastic leg in a spring, and when I opened the box, she bounced upright and twirled around to music.  I think maybe a lot of people had a jewelry box like it, but I have never seen another one since then, so maybe not. 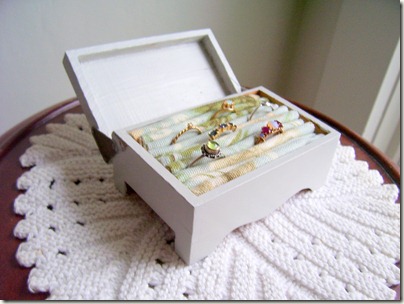 I remember a cameo ring I had back then that my Grandma gave me; I think it came from Avon.  It was carved white (plastic) against a light blue background, and it was so, so pretty.  I wish I had a cameo now, I think they’re so beautiful. 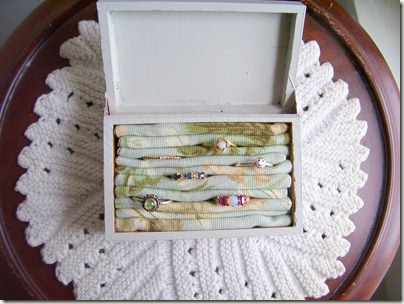 When I grew up and had some nice jewelry, I wanted a nice place to put it,  but nothing ever came along.  Once, I screwed some cup hooks right into the wall so I could hang necklaces there and they wouldn’t tangle.  Eventually, everything just went into a small drawer, and it was pretty hard to find anything. 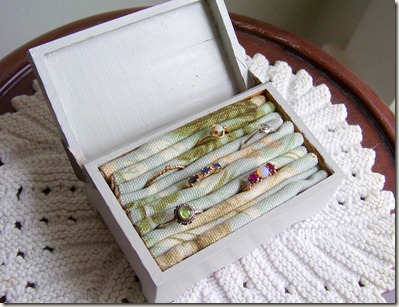 The February issue of Country Living (US) featured a tutorial for something like this little ring box, and what could I do but drop everything and make one?  Mine differs a little from their version, so in case you’re interested, here’s what I did: 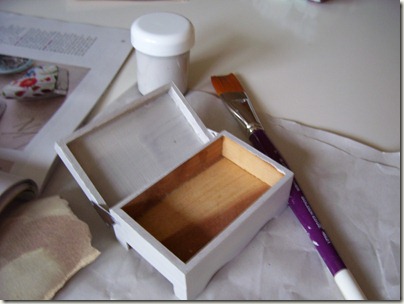 I had this cedar box already; it has been biding its time in the bins for many a year, because I just knew the right project would come along eventually.  It is similar to those wee cedar boxes I used to see in roadside souvenir shops when I was young, with “Sault Ste Marie, Michigan” or “Niagara Falls” woodburned into the lid.  This one didn’t have any lettering, but when I sanded it, it for sure was cedar—oh, right, sand the box.  I made sure to remove all the varnish.  Then I painted it with two coats of what just happens to be Stonington Gray by Benjamin Moore (our paint store carries that line in teeny little sample pots for $2.49, so I have a few colors.  They are brilliant for things like this!)  You can remove the hinge, or paint carefully around it, or heck, just go ahead and paint the hinge if you want. 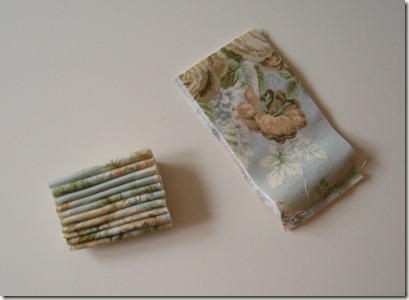 For the lining, I cut two pieces of decor-weight cotton and one piece of cotton batting just a smidge narrower than the width of the box’s opening, and sandwiched them with the fabric’s right sides together and the batting on top.  Then I machine basted it on three sides, turned it, pressed it and folded it like an accordion.  The folds are about 1/8” shorter than the height of the inside of the box.  As I made the folds, I tacked them at the bottom edge, like this: 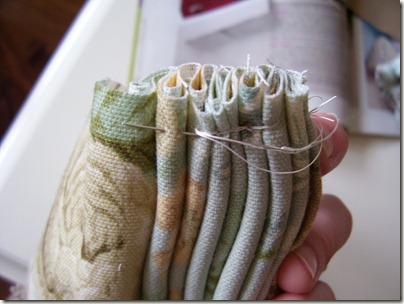 When it was wide enough, I stopped folding, cut the end off, shoved it into the box—no glue—and it was done! 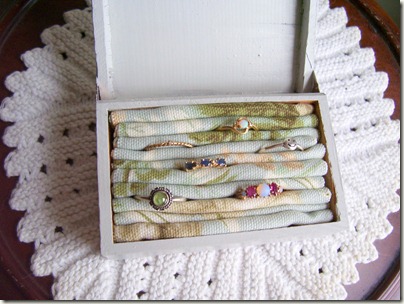 The hardest part is waiting for the paint to dry.   Wow, I am so impatient…I think you can buy little wooden boxes like this one in craft stores, so you don’t have to go all the way to Niagara Falls to get one.