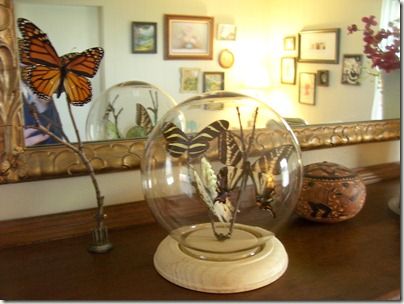 I think this is the year of the butterflies.  Have you seen the new Design*Sponge book?  Mark Montano’s Big Ass Book of Home Decor?  Even Anna has one in her new banner (which also makes me want to needlepoint so bad!)  And after I wrote about Luna Moth, I wanted some, too.  I love all different kinds of weird things, and old glass cabinets of curiosities is way at the top of the list.  I once saw a museum display of “exotic” specimens collected in New Guinea by the Captain Cook expedition—just the tiniest birds you ever saw, frozen in time.   (I did have to feel a bit sorry for the birds, I admit.)  I also have a bizarre admiration for taxidermy, especially when it’s silly, like mice sitting around a table having tea, which may surface unexpectedly in these pages someday, who knows.  Anyway.  Ever since my failed high school biology project, I’ve wanted a beautiful butterfly collection, so when I saw this, I decided it was time.  Originally, I was going to use fake butterflies, made of feathers, but they just didn’t look, I don’t know, real enough. 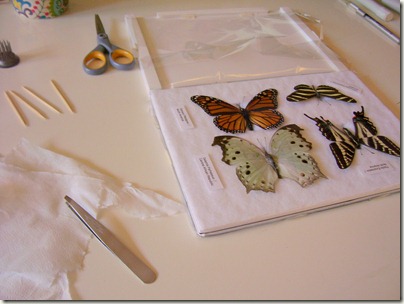 I thought to just wait for summer and collect them myself, but I am such an impatient little magpie, and besides, unless I wanted a whole display of just monarchs (which are plentiful in our part of the world and which, come to think of it, would be awesome) I had to turn to a professional.   Goodness me, there’s some great stuff out there in internetland.  In the end, I bought four unmounted butterfly specimens from this etsy seller, and I’m not really sure what a “mounted” specimen would be like, but these four had their wings already spread and looked ready to stick somewhere.  They showed up so beautifully packaged, with little labels telling me the Latin name for each, and careful instructions detailing how to open the package without wrecking any delicate wings. 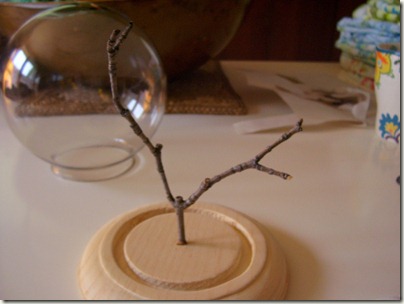 We assembled our tools:  x-acto knife, tweezers, glue (I used E6000) toothpicks, paper towels and a plastic stick, normally used for who knows what, that looked like a dental instrument.  The glass dome is a light fixture cover, found at the thrift store, and the wood base was custom crafted by my husband to fit it.  The twig is from the ground in my backyard.  I found I needed an extra pair of hands for this, and it ended up being a little like building a ship in a bottle, since the opening of the glass dome is so much smaller than the interior of it.  We planned our strategy carefully, but there was a lot of me saying, “Is it in the glue?  Wait, be careful!  Ahhhh!  I can’t even seeeee!”  and a lot of him calmly saying, “Here, let me do that.”

In the end, we broke off three antennae, but the bugs sustained no major damage, and I am pretty happy with the results.  Apart from heading off to Costa Rica with a net and probably also a handful of government permits, this seemed like the best way for me to do it.  I’ll admit, I had a moment of feeling a little uncomfortable about using something that used to be alive to decorate my home.  Elton John singing “Butterflies are free to fly” came into my head, and I felt a pang of remorse.

In fact, real-life reaction to this project has been mixed, ranging from “That is amazing!!!” to “Er,…they’re dead.”  Dean said this:  “They’re pretty, but it’s not very cozy, is it?  Dead bugs?”  Wherever I go, he just goes along, bless him.  I should also point out that none of these particular butterflies are members of a protected or endangered species. 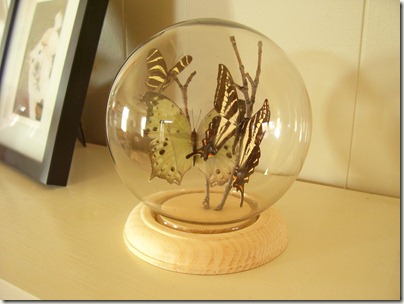 They’re not playing poker or riding motorcycles or anything, but I like them anyway.  What do you think?