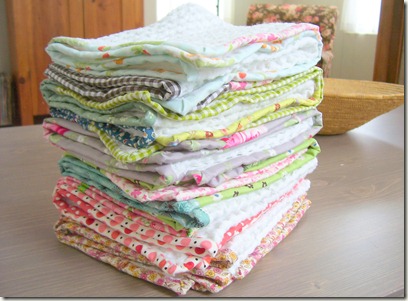 And now I have a humungous pile of hand towels.  This is the second half of a project I began back in August, after I shockingly sadly fortuitously shrank a two-sided cotton shower curtain in the wash.  That episode was actually a perfect example of the way I operate:  first, make a stupid mistake.  Shrinking something in the laundry is rookie stuff, and this isn’t my first rodeo, so you’d think I’d have that one nailed down by now, but clearly not.  Then, make lemons into lemonade by looking at other uses for the busted/shrunken/stained up thing of which I am suddenly in possession.

So, clutching my ruined shower curtain in my hands, I thought to myself, what besides a shower curtain is made of terry cloth and waffle-weave cotton?  Well, towels!  First I made these, and they worked out pretty well, except they are mostly white and therefore I don’t like to use them.  Do you all have that problem?  I have a serious problem with that problem.  The other day, somebody used one of them to wipe the counter, and to myself, I wailed, What are you doing????  That towel is white!!!  Of course, that’s what Oxi-clean is for, so I know it’s just me and I’m working on it. 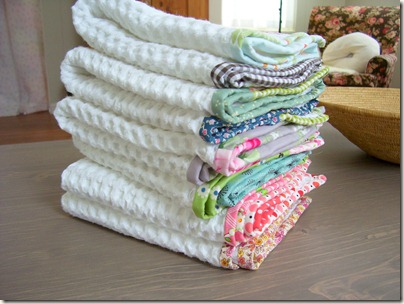 The curtain yielded six hand towel sized pieces of this waffle-y woven cotton, which I cut out last summer, then realized they would need bias edging, and became overwhelmed by the prospect, so I stashed them in a basket on a high shelf and tried to forget about it.  But a crisis revolving around the arrival of company, combined with an actual shortage of towels firmed my resolve and I finally got it together to finish them.

There are six towels, which means there are 24 corners, and so I decided to use this tedious chore as an opportunity to work on my miters.  There were quite a few failures: 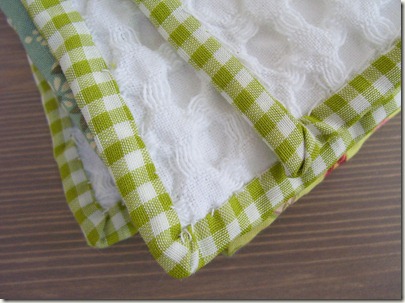 Bleah!  But there were also a lot of successes: 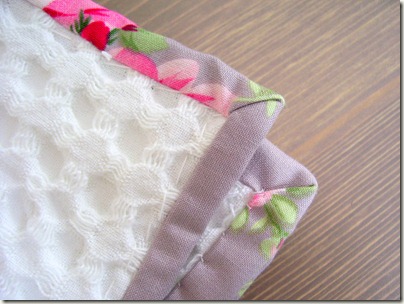 There were more good than bad, I’m happy to say.  I do love me a nice sharp mitered corner.  I don’t make them often enough to really do it well, but I want to.  Twenty-four corners later, I think I’ve got this.

I’ll be away for the next few days; my mom is coming for a visit, and together we are heading somewhere fun!  See you next week.