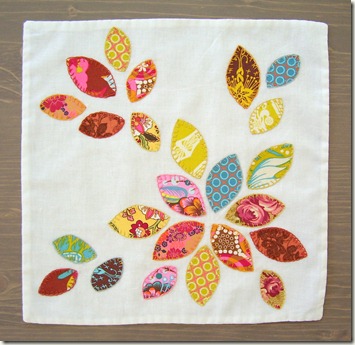 I am constitutionally unable to leave any flat surface uncovered.  There was a little table that needed a dose of something pretty, so here is this piece of whimsy to be of remedy.  It was much more sharp and square before I removed the ill-advised ball fringe that I originally added around the edge, which certainly looked whimsical, but which, I eventually felt, added a little too much goofiness to the whole thing.  Now it just needs a good pressing at the edges, and it will snap to attention. 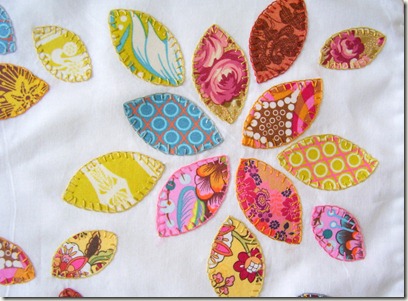 This is a quilt block design called “Little Leaves” from this book, by Elizabeth Hartman.  I used an assortment of scraps, mostly from my much-loved and ever-shrinking stash of Loulouthi, and pressed lightweight fusible web to the wrong side of the fabric pieces.  Then I traced the leaf patterns onto the paper side of the web and cut them all out.  Now, I think there must be a better way to remove the paper backing from the fabric at this point, because picking at it with my fingernail and cussing a lot didn’t seem to work that well and it took most of the morning.  Anyway, once that was done, I fused the leaves to the white backing with a hot iron and blanket stitched around them with embroidery floss.  Then I stitched the whole thing to a second square of white muslin and turned it right side out, pressing well.  [At which point I added the aforementioned ball fringe, feeling all the while, sinkingly, that it was not working, and so this morning, I took it off again.  I don’t know, now I’m thinking the ball fringe was kind of cool.  Indecision!] 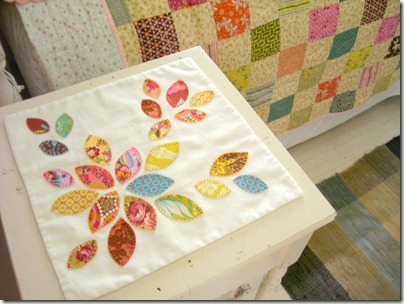 It is going to live with an art student whose current medium is charcoal, so I rather fear for it, and actually I assume it will not last long.  Better enjoy it now.

You might want to see it with the fringe: 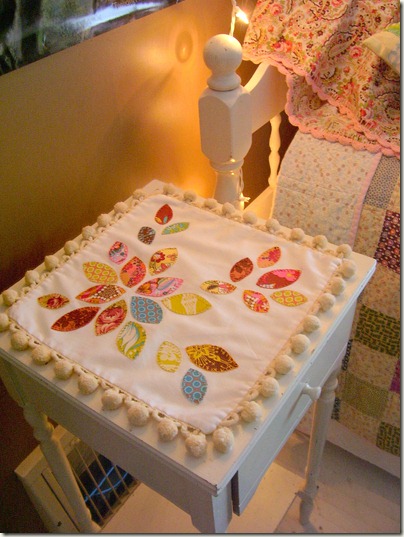