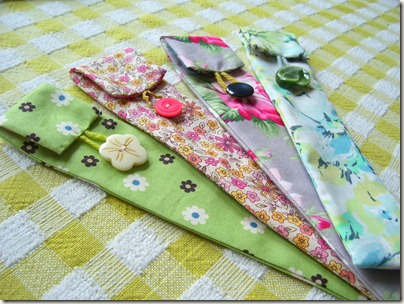 Sometimes, I just have a hard time getting anything done, mostly because I keep starting things.  I’ve been knitting so much lately, am completely surrounded by piles of unfinished knitting—and there’s nowhere I’d rather be, really—but have little to show for it at the moment.  This little project actually came along in order to facilitate more knitting.  They are sleeves for my double-pointed needles. 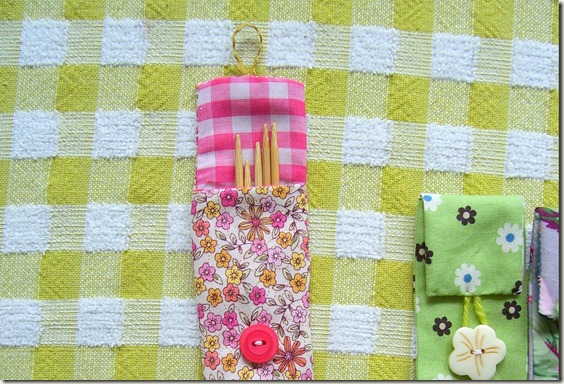 They also gave me an excuse to try out my new sewing machine.  Yes, you heard me.  I know!  Three sewing machines is not too many…and this one is special.  More on her later, I want to make a proper introduction. 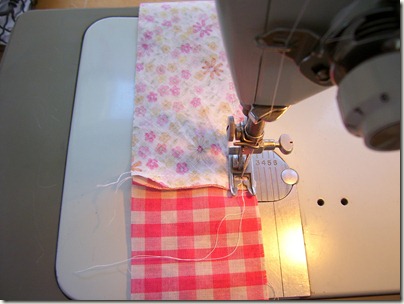 
Edit:  I’ve had a few requests to do a tutorial for this project.  I can’t add any photos to this post, but I can add text, so I’m going to do my best to explain the process with words instead of pictures
Okay, here’s what to do:

1.        Cut out your fabric, one lining and one exterior piece.  For my needle cases, it looks like I cut two pieces of 1 ½” x 14”.  [The needles are 6” long, and it needs to double, and have a flap—6” + 6” + 1.5” + seam allowance = 14”.]
2.       Place the two pieces together with right sides facing, and using a ¼” seam allowance, stitch one short end together.  [You now have one long strip].  Press the seam open.
3.       Make a mark at the other end of each piece [or, both ends of the one long piece you now have] about 1.25” from the raw short edges.  Mark both sides of each end. Fold the piece in half again, right sides facing, with the short seam at the bottom.
4.      With right sides facing, bring the seamed end up (in the middle) to meet the marks you just made.  It folds up like a “W”—the exterior piece making a loop on one side, and the interior piece making a loop on the other side.  Pin the long sides.  [This makes a strip with two folded ends, and the short sewn seam at the bottom center, with the short opening and two flaps sticking up on top, over the seam.]
5.       Using a ¼” seam allowance, stitch four separate seams along the sides, from the folded ends up to the marks you made in Step 3.  The marks are right beside each other, with the raw-edged flaps sticking up in between.  Don't sew over the flaps. Backstitch at each of the four marks.  [You now have a tube that’s sewn on all four sides, with a vertical opening at the middle, underneath two unstitched flaps.]
6.     Clip the corners and trim the seams a little, to reduce bulk.  Turn the piece right side out through the flappy, unstitched opening.  If your piece is narrow (like mine were) you may need to use a chopstick or a pencil.  Use something with a dull point to get your corners pushed all the way out.
7.       Stuff the lining into the exterior and press.  [The flap is still unstitched.]
8.       Turn in the sides of the flap and press them.  Blindstitch them by hand.
9.       Turn in the open end of the flap and press it.  Cut a short loop of ribbon or rick-rack and tuck it into the opening.  Blind stitch the opening by hand, giving a few extra stitches to tack down the loop as you go by it.
10.   Fold the flap over and press everything.  Use the loop to determine where your button should go, and sew it on.

I hope this is helpful.  Good luck!