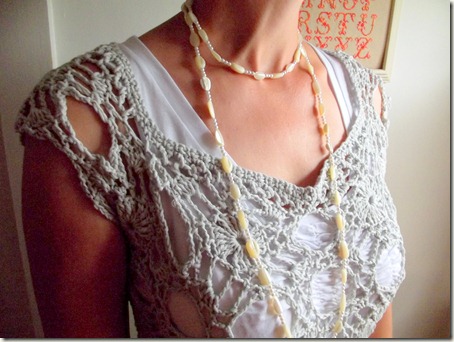 Sweet mother of pearl, it is hotter than blazes here in my neck of the woods.  My hair looks like a meringue.  My glasses are sliding off my face.  It is summer with a capital S.  There isn’t enough iced tea in all the cupboard.  And still, I rather like it.  I do, what can I say?  This is my favorite kind of weather.  While that is the story of the day for anybody within five hundred miles of here, in other news, I have made this awfully pretty lacy top. 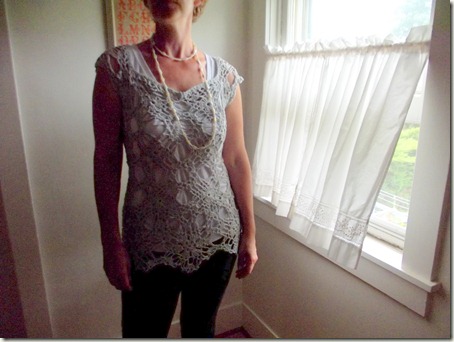 [Artsy photos of me by Dean Johnson.  That one has kind of a cool graininess, which I sort of adore, with the blowing curtain adding a certain Wyeth-ish quality.  He’s pretty good at almost everything.] 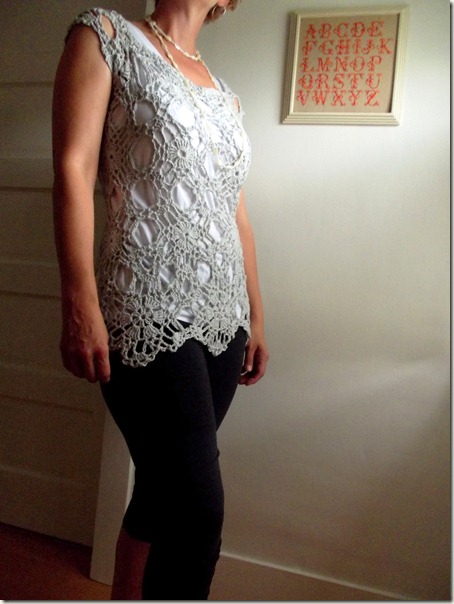 [Dang, I think I like the photos better than I like the sweater.  I always tell him to keep my face out of it; otherwise I’d have to spend an hour getting all spruced up for having my mug on the internet, and who’s got time for that?] 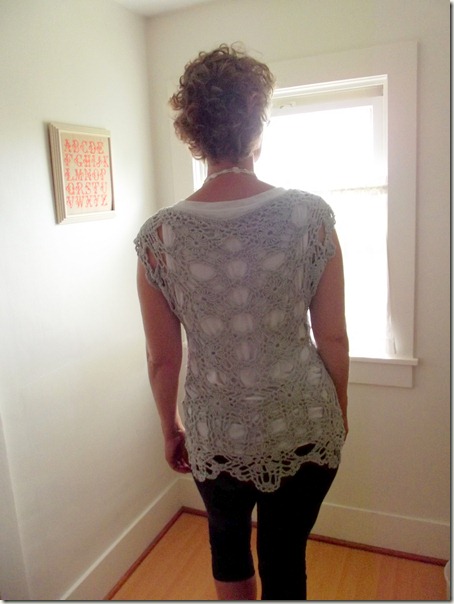 So, this little top.  I looooooove it.  Also, I love that I actually managed it, because it turned out to be quite a brain teaser for me.  This thing almost beat me.  You join the motifs (which are easy enough on their own) as you go, working in the round while following a flat chart, and there are square motifs and pentagon motifs and hexagon motifs, and they are strategically placed in order to make the shaping happen, which is just tremendously clever, but I had to use about eighty markers and sticky notes and diagrams to keep everything straight.  Four times, I said out loud, “Omygosh, this is too hard for me.”  Then, I’d go off and do a load of wash or mop the kitchen.  After awhile, I’d come back and try again, make one little breakthrough, then get stuck.  Off I’d go to clean the tub.  Back again, another mystery solved.  And so on, until lo! It was done.  It felt a little miraculous, and I was very proud of myself.

The pattern is the poetically named “Lacy Top” from the 2012 crochet issue of Vogue Knitting.  It is clever and without flaw, and I am feeling like such a brainiac for figuring it out.  I used Jo Sharp Soho Summer, which is a DK weight cotton (and is practically unplied—it’s like a bunch of individual threads that just lie near each other) but which is very soft and is the most gorgeous shade of pearly gray.  I think I used about four balls of it—I have so much of this in the stash that I honestly don’t notice when some of it is missing—and a US F hook.

The only thing is… 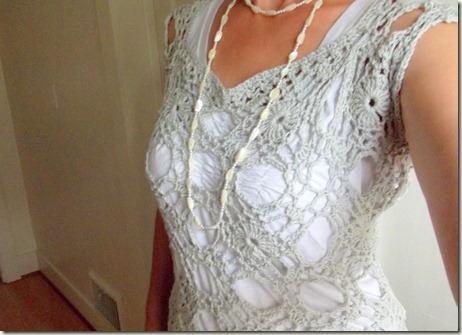 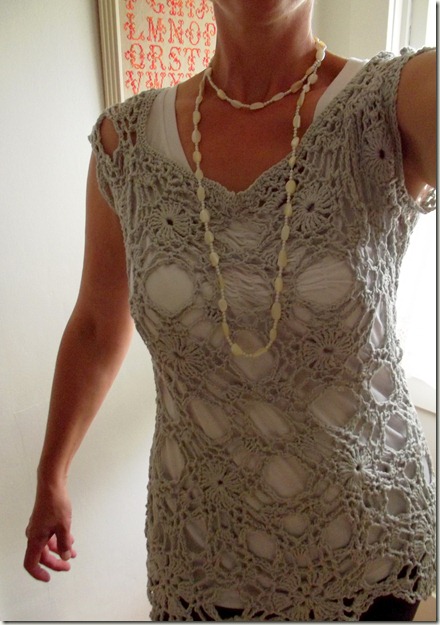 Do you see what I see?  Have you seen Mean Girls? 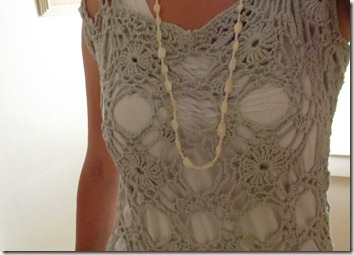 Alas, this is a result I did not anticipate, and I can only blame myself, after all, and I swear in all my trying-on I never saw it, though Dean later said, “Yep.  I noticed.”  So.  Any ideas?