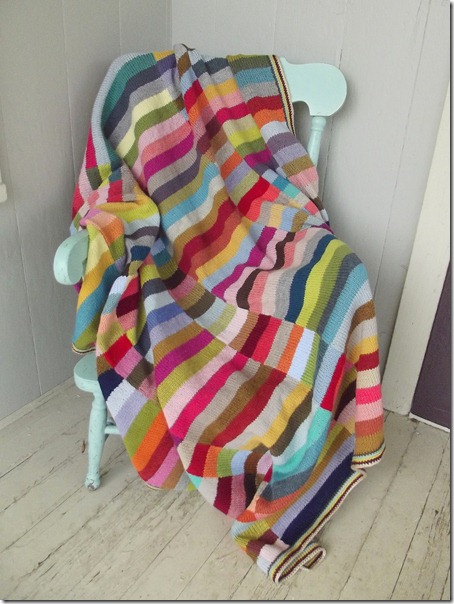 This is the latest in what seems to be my current series--Stripes:  A Hectic Melange of Whatever’s In the Cupboard.  It has an almost vibratory quality—as I look at it, my eyes can not rest, which your Studio Art 101 professor will tell you is not necessarily a plus.  It hums.  It’s like an optical migraine.  It might give you one, if you peer at it too long.  The interspersed neutrals offer breathing space and contrast, but the saturated darks just keep jumping, waving at me, jostling for attention.  Looklooklooklook! 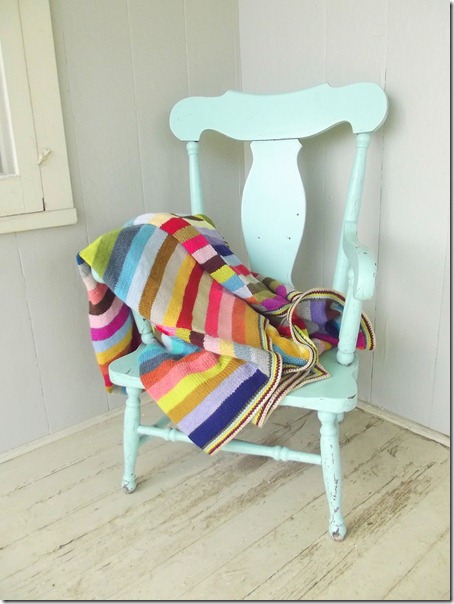 I began this, as usual, in an effort to cultivate a long term project for the winter.  I spent a few lovely months knitting long scarves in stockinette stitch, using random oddments from my leftovers basket, which sat beside my chair, always at the ready.  I knit some sections that were wide (45 stitches, 60 stitches) and some that were narrow (one of them is 15 stitches across) to accommodate the tiny leftover pieces.  I made an effort to place the colors well, all of which went down the tubes when I sewed the long strips together and pink and blue ended up next to each other a lot. 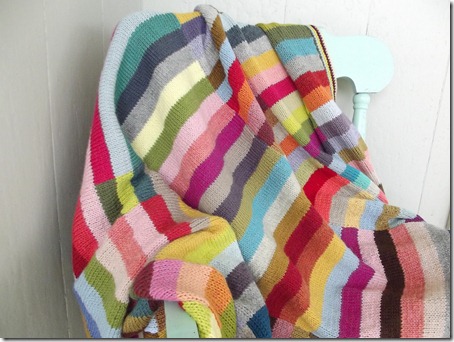 I chose the widths of the strips at random, trying to make sure there were a roughly even number of wide vs. narrow.  I worked 54 color stripes of eight rows each, then bound off and set the piece aside, and began another.  When the total number of cast on stitches equaled 285, I bound off the last strip and sewed them all together using mattress stitch.  I lost my mojo a little bit at this point, because it was all very wonky and weird, and then I was in the yarn store browsing around while they were having a class in the back, and I heard the instructor telling them [the truth] that no matter what you do to it, stockinette stitch will curl at the edges, and there’s no hope for it, and that they should not use stockinette stitch for things that they wish would lie flat.  Which, of course, is completely true, but which fact I have managed to circumvent on occasion, using the almighty steam iron and a couple other tricks; chiefly, a single crocheted border using a relatively small hook.  Still, I fretted.  The blanket was curling at the edges, a lot.  But I blocked the heck out of it, and of course, it turned out okay.  The blanket is flat.  So, yes, stockinette stitch will curl, no matter what you do.  That’s true.  But, you can also sometimes block out the curl, which is also true.  There you go, a little piece of knitting paradox. 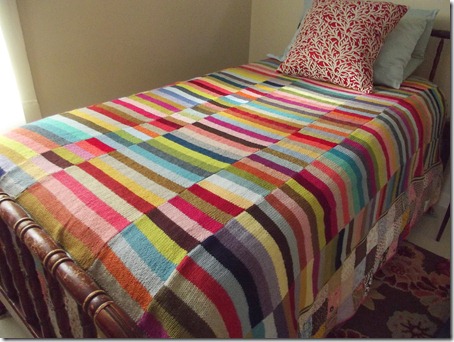 When it was all finished and I held it up, we agreed it looks just like a television test pattern.  This station is experiencing technical difficulties.  (Remember that?)  The skinnier panels appear to neatly, almost disturbingly, bisect a larger striped scheme.  There is an effect of its having been cut up and sewn back together wrong.  My brain keeps trying to organize the stripes, to sort the patterns, and keeps failing. 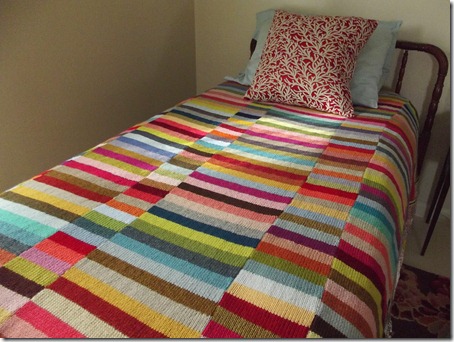 Maybe I’m just being rebellious, but I sort of love all that discord.  It’s exciting, it’s crazy, it’s beautiful. 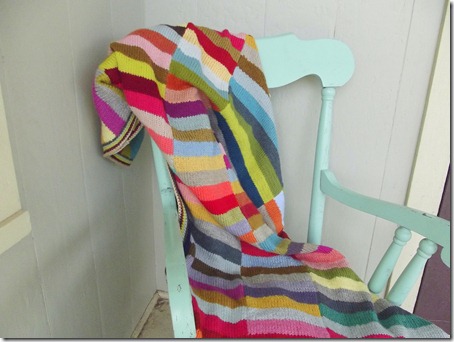