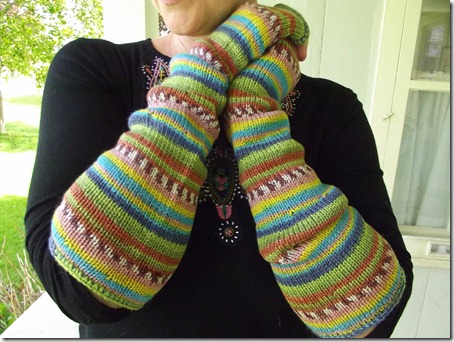 Don’t be fooled by the green grass and leafy tree in this photo.  It is cold here, mercilessly.  It is taking the stuffing out of me, I’ll tell you.  I may have seen a few snowflakes today, for real.  I won’t be putting the woolens away just yet.  Ugh, enough about the weather. 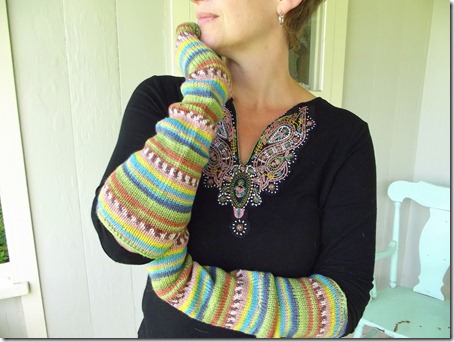 I made these arm warmers because I’m cold, and also because I love love loved the yarn.  It is Knitcol trends, in the very poetically named color 047.  Really, I think it is the name of the yarn that tempted me this time.  047.  Sigh!  Swoon!  It sounds like a song, doesn’t it? 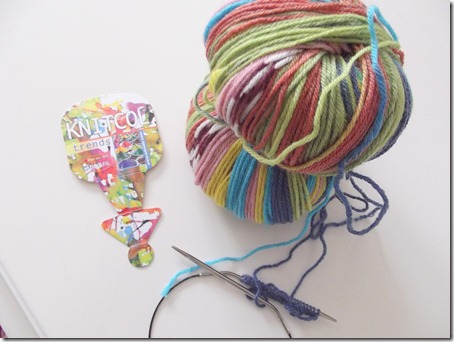 I tried without success to make a hat with it, noticing eventually that the stitch count has to be just so or the self-striping doesn’t work.  So that left me with the option of socks, a scarf, or arm warmers.  I guess my arms were cold.  Plus, I just wanted to see this yarn in action.

I made up the pattern, so if your arms are cold and you’re sick of winter and it snowed where you are this morning and you just can’t take it anymore and you happen to have about 250 meters of a DK weight self-striping yarn lying around and you feel like making a pair of these today, here’s what I did:

Using US 4 double pointed needles, I cast on 60 and worked about three rounds in stockinette stitch, then decreased six stitches evenly spaced in the next round—54 stitches.  Then I knit around and around for awhile and watched TV until it seemed like it was time for another decrease, about six inches later.  I decreased another six stitches evenly spaced in the next round—48 stitches.  Then I watched some more TV and knit around and around without paying attention until it was time to make a hole for my thumb, which I made by binding off 10 stitches, then knitting around again, and when I came to the bound off stitches, I cast on ten.  Then I kept knitting around and around until the first ball of yarn was almost gone, saving just enough to single crochet around both edges and the thumbhole.  Make another one with the second ball of yarn. 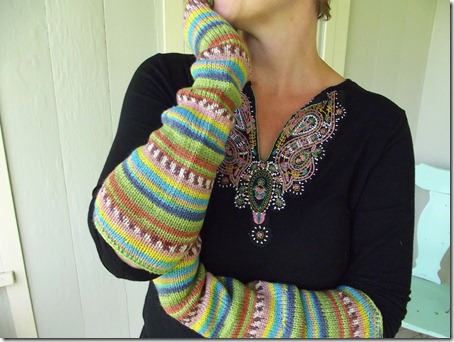 Getting proactive around here.  No griping about the sleet!  No moping!  No lamenting the potential loss of another season of peaches.  (I might lament that a little bit, you can understand, I’m sure.)  Just knitting.  Knit.  Knit.  Knit.