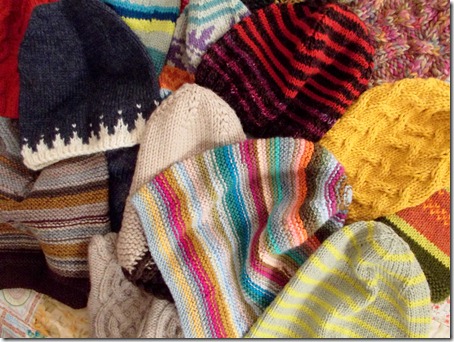 There’s something about knitting a hat that makes me go a little crazy.  Might be how small and quick they are to finish, or how portable, or how readily they lend themselves to color play—mostly it’s that, I think.  I just know it seems to work for me to have a combination of Big Projects (such as that goes with me, you know—the seed stitch wrap is proceeding at an appropriate crawl, you’ll be pleased to hear) and smaller, more manageable projects that can be accomplished so I can move on to something else.  A hat is done before I know it, and as I knit, I am eyeballing the yarn pile, waiting for the next brainstorm. 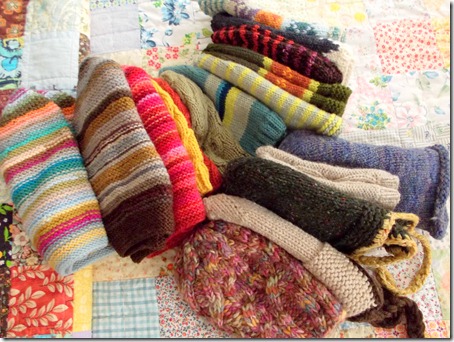 I’ve used a few different patterns here—I’ll link them all for you next time—and some are improvised by me on the spot.  Really, once you know the formula for making a hat, the world is your oyster.  Here’s a quick and dirty hat recipe:  Cast on a number divisible by X, work a ribbing or edging or whatever, then knit around in whatever stitch pattern you want until the hat is however long you figure is right, then start decreasing by knitting X -2, then knit two together, around.  Knit one round plain, then knit X –3, knit two together, around.  Etc.  Until you run out of stitches or feel like it’s getting too pointy, then you just knit two together all the way around for a little while, or decrease every row.  When you have a small number of stitches left on the needles, cut the yarn and run the tail through them.  Pull them up snugly and weave in the ends.  Add a pompom if you want.  Done. 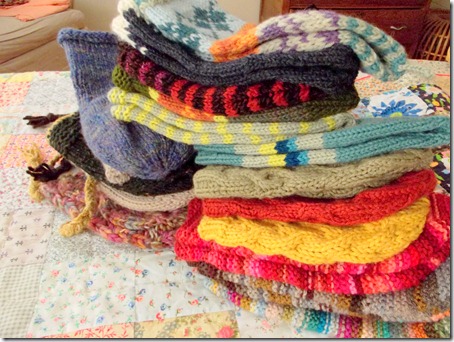 I’ve said before that I don’t often knit for other people, but this pile of hats (and there are more to come) is headed toward a good cause, and along with the satisfaction of helping others and stuff, I have gotten this in return as well: 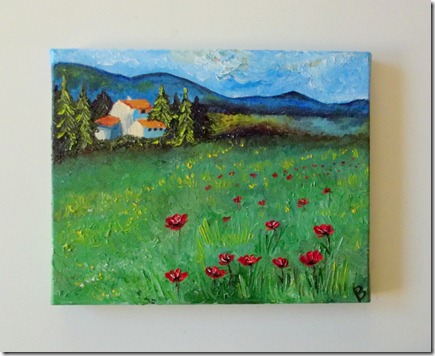 That’s an original oil painting, done by my beautiful BFF, who can obviously see into my dreams because this little alpine cottage, nestled in the pines at the edge of a poppy meadow, is where I want to live forever.  She is an artist and a rock star.  Everybody wins here, but mostly me.