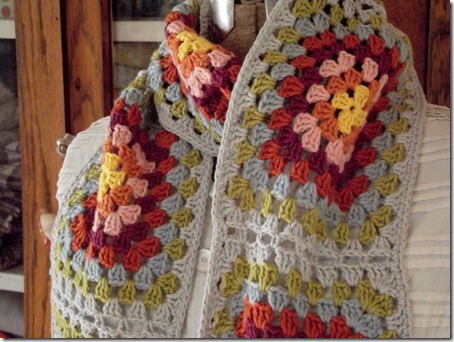 We’re having a burst of summer weather here in my neighborhood and it is hot already today, even early this morning.  Nevertheless, I am making scarves and hats—really, why not?--and this one, this scarf, makes me feel as though I have hit upon it.  This is the scarf I want to wear, this is the one.  It might not work in the deep and frigid misery that is January in New York, but for those first really cold days, which will be here before long, this is perfect.  It’s colorful and crafty and granny-ish, and I love it so much.  It looks like me. 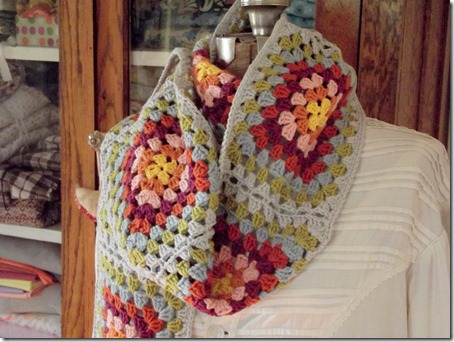 Even though I am mostly down to nothing, scrap-wise, I do still have a lot of yarn in the cupboard, so when I chanced on the prettiest granny square scarf ever, there was nothing to stop me from immediately sitting down and starting.  Which, honestly, is the biggest reason I ever get anything done.  If I already have all the stuff to make something, I’ll be making it right now, you bet.  Which is why I always have a ton of projects lying around half-finished.  I am so seduced by possibilities. 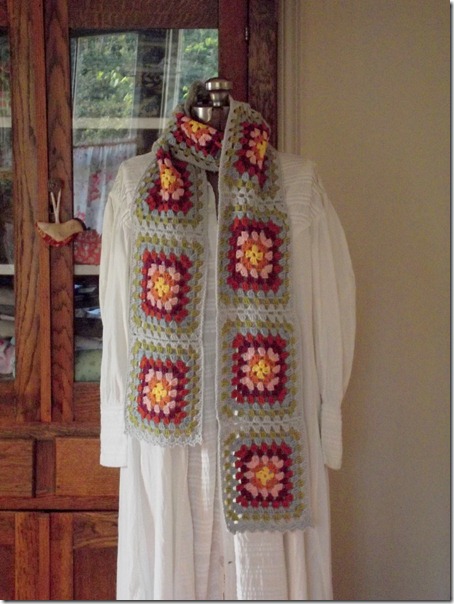 The yarns I used, mostly artifacts from the Great 70% Off Sale of 2012,  are Debbie Bliss Baby Cashmerino in olive (340025), Debbie Bliss Rialto DK in dark orange (23032), Sublime Baby Cashmerino Silk DK in light orange (0219) and purple (0217), Debbie Bliss Cashmerino Aran in light blue (ball band gone), a scrap of KnitPicks Comfy in light pink, and a teeny bit of yellow cotton something or other that I thrifted somewhere and can’t identify.  Oh, and the last round of each square and edging is Jo Sharp Soho Summer DK Cotton in pearl gray.  I used a US F hook for the whole thing.  There are ten squares of eight rounds, and I joined them as I went, using this method, which gave it a nice drape.  I added a round of single crochet all the way around, and then finished it with a row of shells at each end. 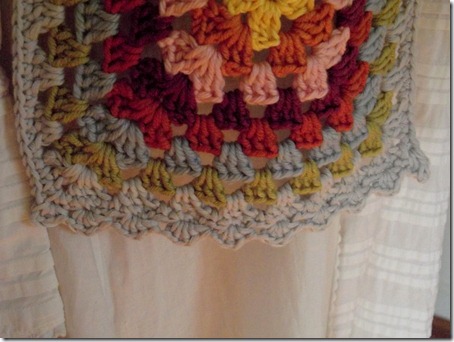 Along with apples and bonfires and hot cider, a thing like this helps take the sting out of the end of summer.   Until then, I’ll just be over here, sweating.  And putting trays of Roma tomatoes into the oven for a sloooow roast, oh my goodness, have you tried this?  I cut the tomatoes in half (or in chunks if the tomatoes are big) spread them on a cookie sheet, dosing them generously with olive oil and salt.  They go into a 200 F oven for about eight to ten hours, until they are like tomato raisins, still soft, but shriveled and small, and absolutely teeming with flavor.  They are, in a way, reduced to their essence, and oh boy, their essence is something else, something wonderful you will want to just plop onto a piece of sourdough bread and devour.  Whatever doesn’t get eaten immediately goes into a big glass jar, and I sprinkle them with more salt, and cover them with oil, and refrigerate or freeze them until I’m ready to make sauce.  Try it, you will not believe how good your kitchen smells.