Clothes and the dye pot 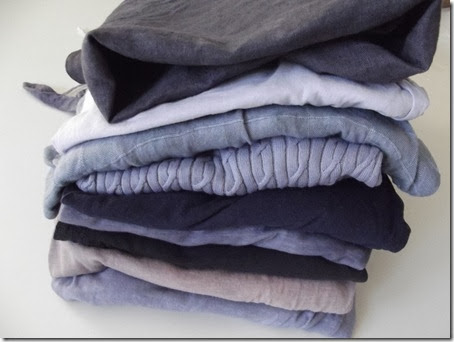 I have so many clothes.  Way too many.  Almost all of them are thrifted, and what happens to me in the thrift store is that everything seems so affordable as to be practically free, so I buy at will and then the dresser drawers won’t close.  I cull the wardrobe twice a year, but it still gets so out of hand that I honestly forget what’s in there, and trying to figure out what to wear becomes an expedition into the unknown.  For so long, I’ve wanted one of those French wardrobes, where you have twelve wonderfully made pieces that fit and flatter and feel good, and all match each other, and that. Is. What. You. Wear.  I think what happens in the store is that I try, with each new thing, to inch closer to that ideal, and that I am trading up, but really, I just end up with too many black skirts, a lot of things that are close to just right but not quite, and a lot of stuff that doesn’t match anything else I have.  The other thing is that I have hit that age where the ol’ body is shaped differently than it used to be, and I figured out that the only person who might care about that at all is me.  I take myself by the hand, say, You’ve still got it, sister, to the me in the mirror, and learn how to dress again, because wearing what I always wore would be like expecting my mom to keep wearing her poodle skirts.  Inspired by the fabulous Jessica at scrumdillydilly and her Capsule Wardrobe adventure, I decided to tackle my clothes.

The first thing I did was to put all of it on the bed.  It was sobering.  So much stuff.  I sorted it into two families—brown and black.  If I came across something that didn’t look good with either one—I’m wearing brown pants, will I put this with it?  How about black pants?  No?—then I ruthlessly donated it, and that included more than a few of my handknits.  They didn’t make me happy, so I let them go.  If something didn’t fit, flatter, or feel good, out it went.  There was still a lot left, the clothes I do like.  The next step was to bring some order to the situation, so I bought some RIT dye (black and pearl gray) and designated the most beat-up soup pan in the cupboard as the new dye pot. 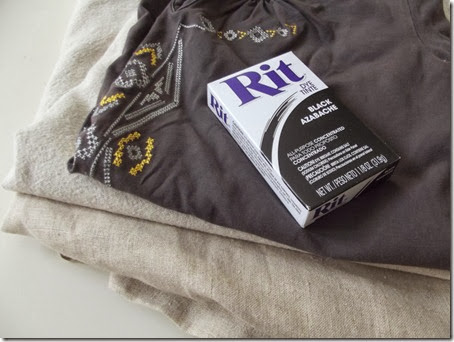 There is so much information out there about how to do this, and I read most of it, and a lot of it contradicts itself, which can make this process seem dangerous, but I didn’t have much to lose here.  I had already weeded out six huge grocery bags of clothes to donate, and the clothes I decided to dye were going with them unless I could make them work for me somehow.  The shirt at the top of the pile fits beautifully and makes me feel good, but it had faded over time, becoming uneven and blotchy.  The linen skirt underneath was embroidered in peach and green flowers—interesting, but uninspired, and I had never worn it.  There was more—the same (comfy, flattering) shirt in both salmon and turquoise (so I never wore them).  Lots and lots of white things.  Things I wanted to rescue. I put on an apron and rubber gloves, and boiled things one at a time in my pot (which will never again be used for food), stirring with a dye-pot dedicated spoon, mostly according to the package directions and using salt to help the dye penetrate the fibers and a pre-dunk in washing soda to help set the color, using black for some things and gray for others, depending on my whim.  Some pieces used a whole package of dye, some only half.  I was experimenting.  The results I got were sort of thrilling.  Stuff turned out anywhere from deeply, richly black (the favorite shirt, yay!) or pale lavender, probably depending on where it was in the order, how long I left it in the dye, the precise water temperature, and most likely a lot of other factors.  Dyeing is a chemical process, and I understand literally nothing about chemistry.  It looks like there’s a lot of disappointment out there with the occasional purple-ish results from RIT dye, but that purpley-gray is a color I like, so I am not unhappy.  Also, there was some variation in the evenness of the dye, resulting occasionally in something that looked, well, hand-dyed, which is beautifully interesting.  I think that happened because it was too big for the pot, or maybe I didn’t stir it enough, I don’t know.  But I sort of love it. 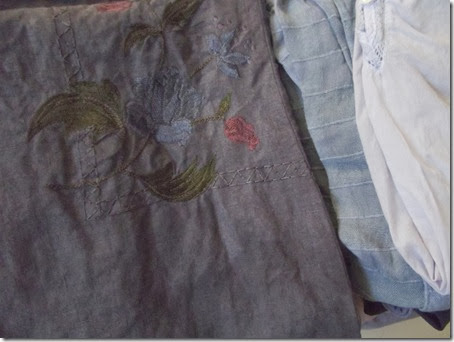 Look at that skirt now.  Now, it is something I want to wear.  Huge success.  I hung it all to dry on a rack in front of the fire, and looking at it there, I thought That could be my capsule wardrobe.  Right there.  Score.