Red, and a story 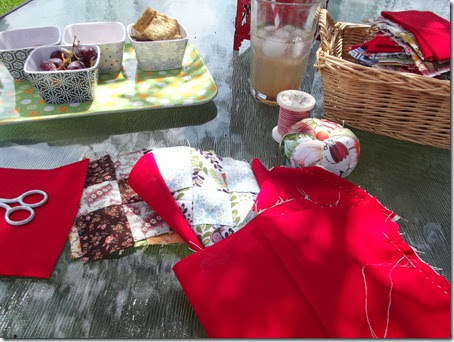 I spent the weekend in the dappled shade of the crabapple tree, hand-stitching quilt blocks together.  That tree is just about to burst forth in beautiful blossoms.  It is trembling on the verge, I’m telling you.  My neighbor’s cherry orchard is already there, and it is a stunning fairyland of white cotton candy.  After dinner, when the low sunlight falls over the trees, we just stare, openmouthed, at it, just saying breathlessly, Whoa.  Look at that.  What a beautiful world.  There was iced coffee and shrub—peach, honey, and strawberry vinegar—and the hens puttering around underneath the table.  One of them has got the loudest cackle; I can’t help wondering what the heck she’s trying to accomplish with all that yelling.  She sounds like those horns you hear at World Cup soccer matches.  Good thing we live in the country. 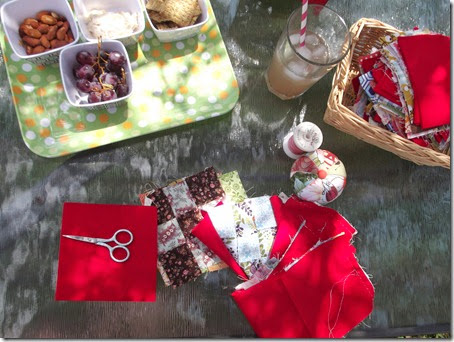 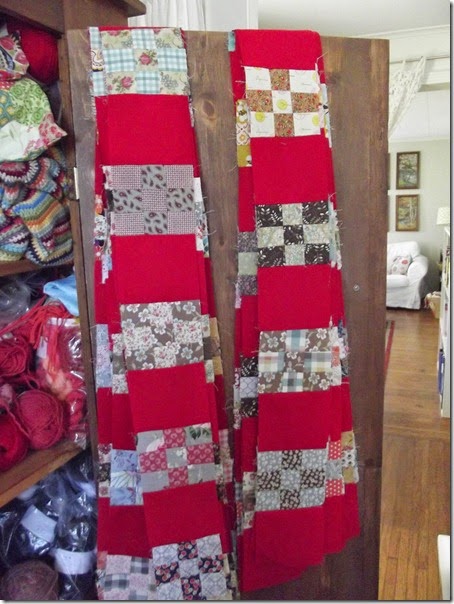 You guys were right about the gray.  As soon as I got home with a length of this mad scarlet, I could hardly cut it up fast enough, and several happy days later, much progress has been made.  Hand-stitching these has been so much fun, I can’t even tell you.  I love my beautiful vintage Singer Slant-o-matic, don’t get me wrong, but if you’re asking whether I’d rather sit quietly stitching beneath a shady tree that hums with honeybees or huddle indoors, hunched over a machine that makes a big racket, I know you know which one I’d choose.

Here’s a story for you:  one day in my 1970’s childhood, me and a bunch of other lummies were hanging around at the playground behind the school, throwing a half-deflated basketball at a rusty hoop.  Nobody was making any shots.  We were spending most of our time fishing the ball out of the weeds.  It was a typical display of ineptitude, because I don’t even know where we found a basketball—more than likely I also had a copy of Harriet the Spy somewhere on my person, and would rather have been reading that—but we were there, getting all sweaty and banging into each other and thinking we were really hot stuff when into the middle of all this flopping and scrambling walked Earvin “Magic” Johnson.  I am not kidding.  He was there for a charity game of some kind, ready with autographs and his girlfriend in tow—she had an extra toe—and there was suddenly no doubt at all which one among us was just about to become a giant superstar, and it wasn’t any of the fifth graders.  I tell this story to illustrate the following—look what the kids gave me for Mother’s Day: 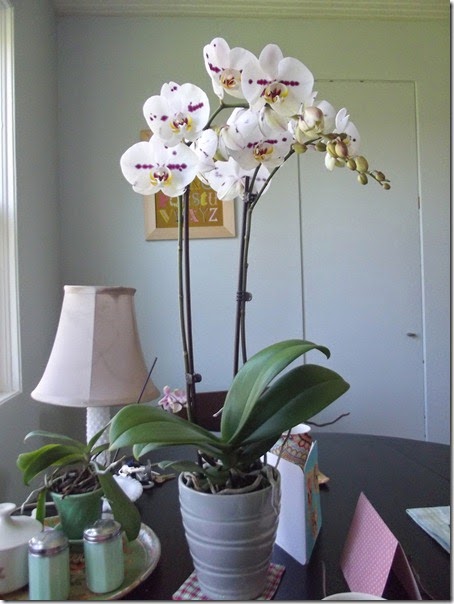