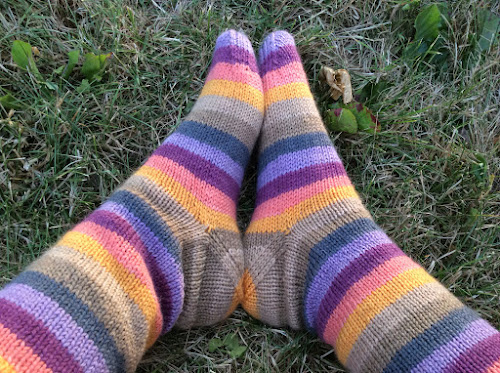 Normally, I don't mind it if my socks don't match exactly. After all, my sock drawer is full of these, and I wasn't overly disappointed by this little anomaly, because, who cares, they're socks. They are either hiding inside my shoes or worn only in the house as I shuffle around through the dog hair. Worrying about making my socks match each other slows me down. I don't have all minute!

This time, however, I decided to care. The striping action of that yarn (Regia Stripemania Color, #6365, gifted to me by Hilde the Yarn Fairy) was so wonderful that I did not want to disrupt it, and I knew that making matching socks would be pretty easy as a result of it. I would spend a few minutes and make myself care about matching socks.

We spent many hours in the car last weekend, and I knit on road trips to keep myself from going bananas, so these came with me. All the way down the leg of the first sock, lost in reverie about the pretty striping, I idly wondered what to do when I got to the heel. My usual sock pattern has a flap/gusset style construction, but that would have thrown a wrench into the striping, making big, wide segments of color on the flap and then much narrower stripes around the foot at the gusset. If I did that, the two socks would still match each other, but I had begun to CARE now. I started to want these socks to be the best socks ever. I wanted to keep the stripes regular, as the dyer at Regia intended them. I thought about solving it by working a short-row heel, but I couldn't really remember how to do it. I wondered if I could fake a short-row heel, tricking the sock into believing I knew what I was doing. Would it magically work? Maybe if I just went ahead and started wrapping and turning, my brain would cough up the long-ago learned and forgotten short-row heel info? I had a glimpse of the future--myself, unraveling two completed socks past the failed, wretched, unmatching and wonky short row-heels. I was almost resigned to wrecking the stripes by flapping and gusseting, and then saw the future of that, too--unraveling. I was about to put the project away and steel myself for ten hours of sitting still and doing nothing (horrors) when I remembered about the Afterthought Heel. Yes! 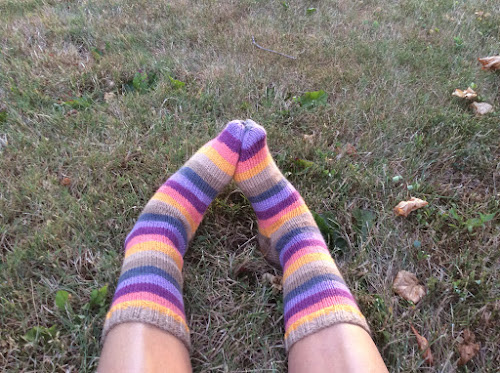 This was the best idea I had all week. No more stitch counting or row counting or looking down to make sure my slipped stitches were slipping, or whether it was a decrease row, or, well, anything really, except the wonderful, free, forward-motion lightness of stockinette stitch, round and round and round. I just knit a whole long whopper of a tube, estimating length and measuring nothing whatsoever, and then I knit another just like it. Oh stockinette stitch in the round, I love you so much. Later, at home, I finished the toe caps, and then, having two long tube socks [don't stop there, it's tempting, I know, but tube socks are not comfy] I went in with the scissors and needles and polished them off. Scissors! What??? Here, watch me. 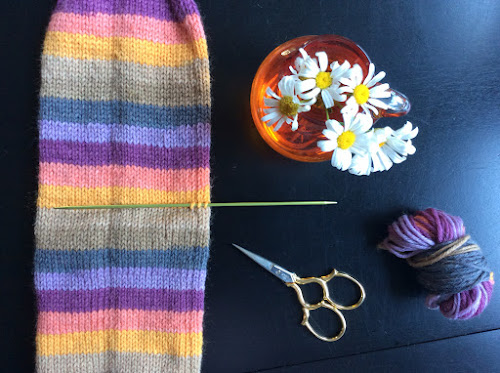 First, you have to figure out where the afterthought heel is going to go. Measure your foot from toe tips to the beginning of your heel--not the back of your foot, but the front of the heel. Better yet, make a footprint and measure that, or trace your foot and draw a line where your heel print would start. Or put the sock on the floor and stand on it, noticing where the front of your heel lands. There's no need to be all perfect about this, because knitting is stretchy, but get an idea. You can find a good tutorial for sorting all this out here. 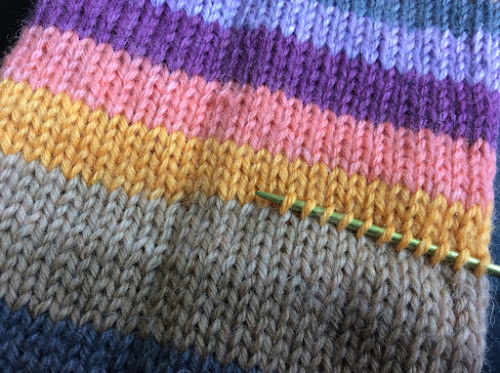 Once you know where to put the heel, take up a knitting needle and poke it into the stitches, half the total stitches, all in one row. My sock had rounds of 56 stitches, so I picked up 28. The stripes made this easy. I just scooped up the right leg of each stitch, all the way to the other side of the sock.

Then, you take your pointy scissors and snip just one stitch from the row below. Just a little snip, one stitch. This is not quite as nerve-shattering as cutting open a steek, but it still deserves a deep breath. Once you've snipped, start carefully pulling out the new yarn end to reveal live stitches. They probably aren't in a big hurry to unravel, but they will if you give them a reason, so do this carefully. Get a needle in there and pick them up as you go if you're worried about it. Pull out the same number of stitches as you picked up in the row above--28 for me--and get them on the needles. 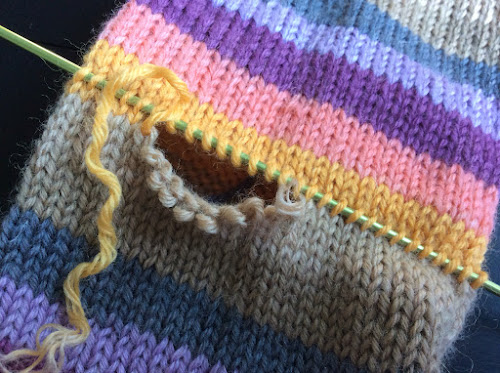 You'll now have two lengths of yarn at each end of the new opening, and all the live stitches safely on the needles. Whew! 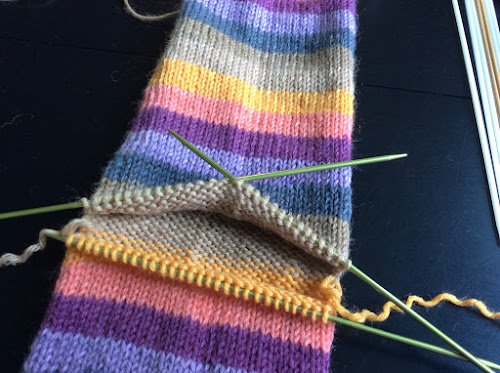 From here, you simply knit yourself another toe, exactly like the toe you've already made for your toes. I know it sounds too good to be true, and I thought the same thing, but listen. For some reason, your heel and your toe will both fit into the same shaped thing. Amazing. I am so in love with all those knitters who went before, who ventured forth into a new way of thinking about these things, and who figured this out. Grandknitters, I thank you all so very much. It may be that this is the unique brainchild of the great Elizabeth Zimmerman, or maybe it was independently discovered by lots of knitters who, faced with deliciously striping yarn or else maybe just a plain need to simply knit a tube and worry about heels later, all came up with the same brilliant solution. In any case, it is brilliant. 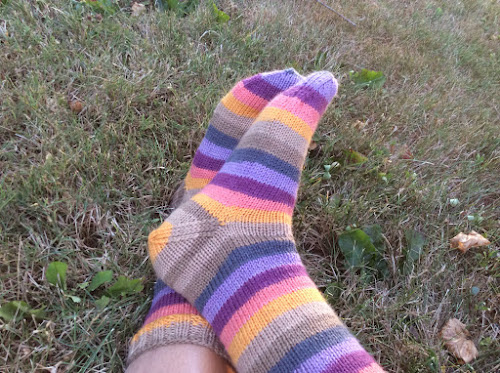